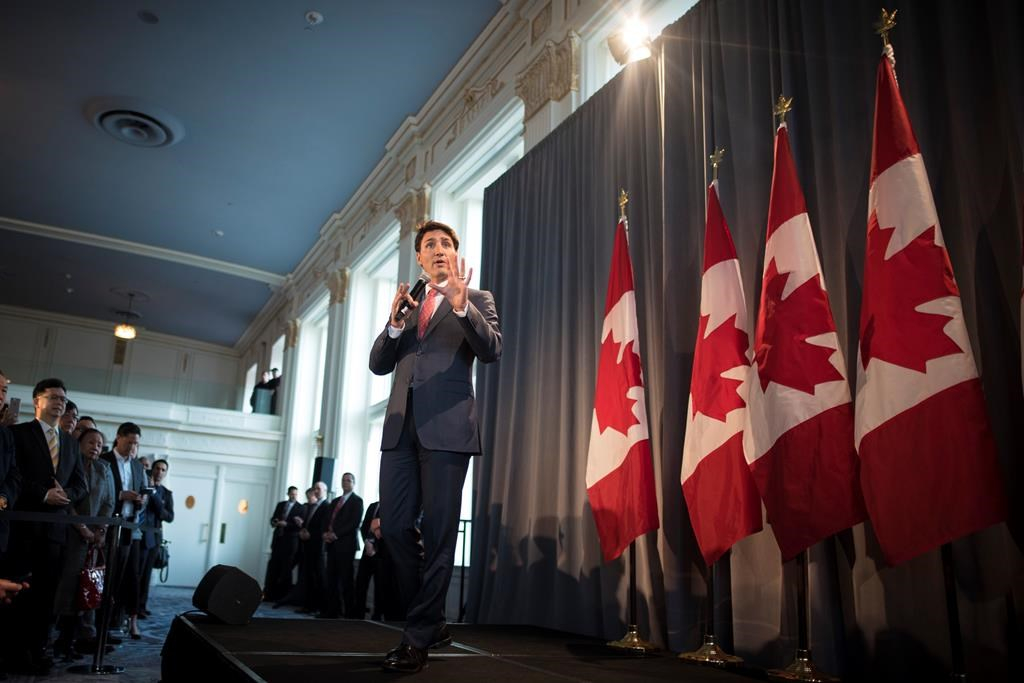 Prime Minister Justin Trudeau speaks at a $1,500 a ticket fundraising event for the Liberal Party of Canada in Toronto on March 27, 2019. Photo by The Canadian Press
Previous story

Prime Minister Justin Trudeau, who typically takes a more deferential, let's-talk approach when protesters get in his face, found himself delivering a rare and rapid apology Thursday for his sarcastic retort to an Indigenous heckler who interrupted his remarks during a high-end fundraising event.

Trudeau said he's sorry for how he responded to the previous night's protester, who unfurled a banner at the foot of the stage during a $1,500-a-ticket fundraiser in Toronto in an effort to draw attention to the impact of mercury poisoning in the northern Ontario community of Grassy Narrows First Nation.

"Thank you for your donation," Trudeau told the woman as she was escorted out by security. "I really appreciate your donation to the Liberal Party of Canada."

"Thanks for your donation" - smugger words have never been said 🙄@JustinTrudeau is failing to help #GrassyNarrows, a key test of his 'commitment' to meaningful relationships with First Nations and to a healthy environment.#cdnpoli pic.twitter.com/vtFtPMSAZ4

Others in the audience cheered the prime minister's dismissive remark, which was captured by cellphone cameras and quickly circulated on social media Wednesday night.

"As I think you all know, from time to time I'm in situations where people are expressing concerns or protesting a particular thing, and I always try to be respectful and always try to engage with them in a positive way," he said following an announcement in Halifax.

"That's how I believe democracy should function, and I didn't do that last night. Last night I lacked respect towards them and I apologize for that."

Any funds that the protesters contributed in order to gain access to the event will be refunded, he added.

"They wanted to express their concerns about an issue and I do take that seriously and I apologize to them."

The PM on his response to First Nations protesters last night at fundraiser: "From time to time I'm in situations where people are expressing concerns...I always try to be respectful...I didn't do that last night. I lacked respect towards them and I apologize for that." @cdnpoli pic.twitter.com/jLUGPCw9dL

Afterward, Trudeau bypassed his motorcade and walked directly into the midst of a fresh group of protesters gathered outside the venue in Halifax, acknowledging their complaints and thanking them for sharing their concerns.

Indigenous people in Grassy Narrows, about 90 kilometres north of Kenora, Ont., have been contending for decades with chemical-waste mercury dumped into the English-Wabigoon river system throughout the 1960s and 1970s, poisoning fish and locals who rely on the river as a source of water and food.

The community hopes to build a world-class mercury treatment facility to help deal with the fallout from the poisoning, which causes often irreparable damage, including impaired vision, muscle weakness, speech, hearing and cognitive problems and numbness or stinging pain in the extremities and mouth.

Grassy Narrows staff met with former Indigenous Services Minister Jane Philpott in December to discuss progress on the facility, shortly after giving the government a feasibility study for the project. At that time Philpott said the government was actively working to get it built.

Trudeau should go to Grassy Narrows to apologize to the people there directly and in person, suggested Assembly of First Nations National Chief Perry Bellegarde.

"This incident highlights the need for action now," said Bellegarde. "There have been numerous commitments from different governments for action yet the people of Grassy Narrows First Nation and Wabaseemoong are still waiting while they face serious dangers to their health. It's time for action."

Grassy Narrows Chief Rudy Turtle acknowledged the prime minister's apology but said Trudeau had to be reminded of the "urgency" of the situation.

"People are dying from mercury contamination and nothing is being done. Enough is enough," Turtle said in a statement Thursday evening.

Trudeau said he plans to follow up with Seamus O'Regan, who replaced Philpott on the Indigenous Services file in January, to "make sure we are looking at exactly everything we can do to continue to work hard in resolving this situation."

"It is something that is of real concern and a real piece of the path of reconciliation that we must walk on."

A spokeswoman for Trudeau said the government is actively working on the file at the ministerial and official level, but would not say whether Trudeau would plan to meet with members of the community or travel there.

Charles Bird, managing principal at the Toronto office of Earnscliffe Strategy Group and a former federal Liberal cabinet aide, said he wasn't at the Toronto event but having organized many similar appearances for provincial and federal politicians, he knows such intrusions can be very chaotic.

As such, Bird said he doesn't believe it's a sign Trudeau is feeling the heat from the political crisis engulfing the Liberal government over allegations he tried to interfere in the case of Quebec engineering giant SNC-Lavalin.

"His style is very much that when he's under pressure, he tends to be calmer."

Even so, Trudeau has been known to flash his temper. In 2016, during a raucous vote in the House of Commons, he was accused of elbowing an NDP MP in the chest while trying to expedite the proceedings.

Editor's note: This article was updated at 10:08 p.m. ET on March 28, 2019 to correct the spelling of Minister Seamus O'Regan's surname. It was also updated with additional reaction and background.

Now that he's mastered the

Now that he's mastered the art of apology Trudeau should issue one to the future generations his lack of action on climate change has f**cked.

Mr. Trudeau's apologies are no longer news and certainly don't come from the heart.

Reply to Trudeau and Laurier

Reply to Trudeau and Laurier Club:
No worries we were happy to supply the water and ice for your event. Just curious about the fish though...Did you detect a slight metallic note?
P.S. the water was boiled for your safety.

First Nation battles to save 50,000 hectares of forest from clear-cut logging