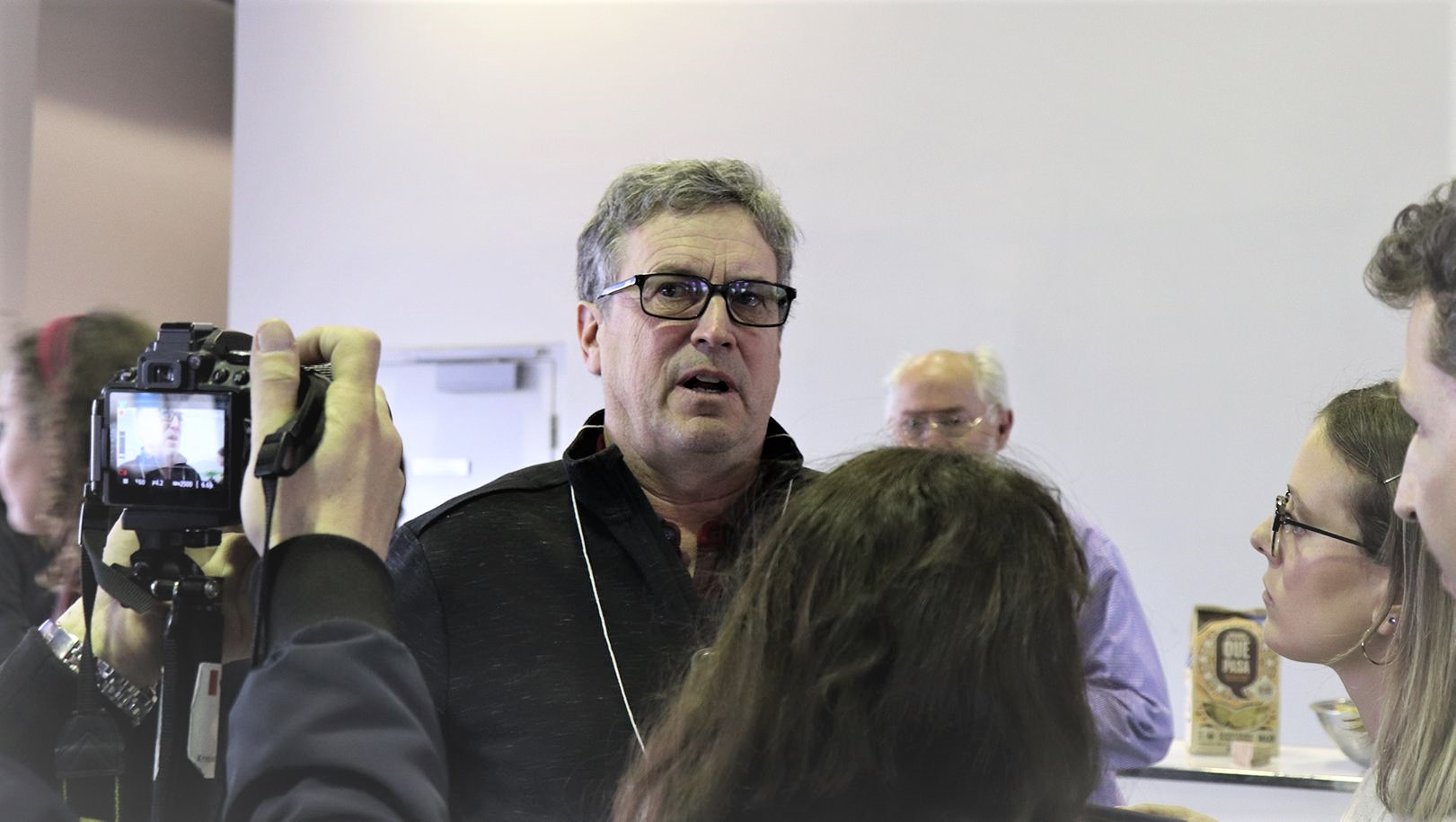 Whistleblower Louis Robert speaks to the media in Montreal on March 29, 2019 about his candidacy for presidency of the professional order of Quebec agronomists. Photo by James Betz-Gray
Previous story
Next story

A former Quebec government scientist who was fired for blowing the whistle on the influence of the pesticide industry on public policy is planning to make a political run for the leadership of his professional order.

Louis Robert announced his decision Friday at the Living Soils Symposium in Montreal. He was fired on Jan. 24 from his job at the Quebec agriculture department after admitting he leaked a document out of concern for public health. He had worked in the department for 32 years.

Robert spoke about his plans to run in the upcoming election against Michel Duval, the current president of l’Ordre des agronomes du Québec (OAQ), the self-regulating professional body for agronomists in the province. Agronomy is a scientific field that integrates various disciplines related to crop production.

Members of the order will be allowed to vote in the contest between April 1 up to May 9.

Robert explained that he was running to push for more independence surrounding the science coming from the government. Robert spoke at the symposium alongside Odette Ménard, a former colleague from the provincial agriculture department.

“The momentum is there,” said Robert about his candidacy. “I want to restore the power balance between agronomists from the private sector and the government.”

Robert’s entry into politics comes after Quebec politicians at the National Assembly agreed to launch public hearings into the impact of pesticides in the province’s agriculture sector.

While the symposium talk was about whether productivity and protection of the environment can be compatible, many audience questions were about pesticides and how to create an equal playing field between farmers and agronomists who counsel them on which pesticides to use.

Robert refrained from talking about his case. His union, the Syndicat des professionnels du gouvernement du Québec (SPGQ) has filed three grievances, and urged him not to give interviews about what happened to him.

Instead, he spoke about his aspirations for the professional order.

“One of my priorities is to ensure that an agronomist who signs a referral will not be employed by a company, which includes prescriptions and justifications in the case of pesticides, but it also applies in the context of member contribution.”

This came a day after Radio-Canada’s investigation into allegations that some agronomists are getting paid by industry, while advising farmers about which pesticides to use.

When asked about potential influence of lobbyists on OAQ members, Robert said he had no proof that the encroachment of industry players in the provincial grain research body, Centre de recherche sur les grains (CEROM), was also prevalent in the professional order of agronomists.

Robert’s exposure of the pesticide industry’s influence on CEROM raised the question about OAQ’s industry sway. Robert told reporters that he was unaware of any industry meddling and had no evidence of its occurrence.

“I want to separate all pesticide recommendations from the sale of pesticides. That’s my idea,” remarked Robert. “An agronomist that tables a recommendation should not in the slightest be remunerated by a company.”

“An agronomist doesn’t necessarily need to receive a commission or bonus to be in a conflict of interest,” Robert told reporters.

Not a new issue

Robert suggested his concern about industry lobbying influence dates back many years to the fertilization sector. “The problem we are facing today with pesticides is an exact repetition of what we went through 15 years ago.”

“Now the momentum is here and it makes me happy.” He added that "it gives meaning to our position at that time...what was unacceptable in the fertilization sector back then remains true with pesticides.”

Robert has received major public support with a petition signed by over 53,000 people for his reinstatement to MAPAQ.

The wave of support behind Robert led a parliamentary committee to decide to look into the effects of pesticides in Quebec’s agribusiness sector on Thursday.

“I am very happy that the general public is getting informed. My only criticism at first glance is that I’m scared that the mandate is too vast,” Robert commented.

“The deputies have a lot of ambition trying to carry out a mandate of this scale. Farming practices in relation to pesticides and the dangers to the population…Even specialists would need a lot of time to go through all of that. I’m scared that we’re fudging the issue.”

I'll have something to say

I'll have something to say later about this, and the poor behaviours in Canada directed at "whistleblowers" intended to cover things up.