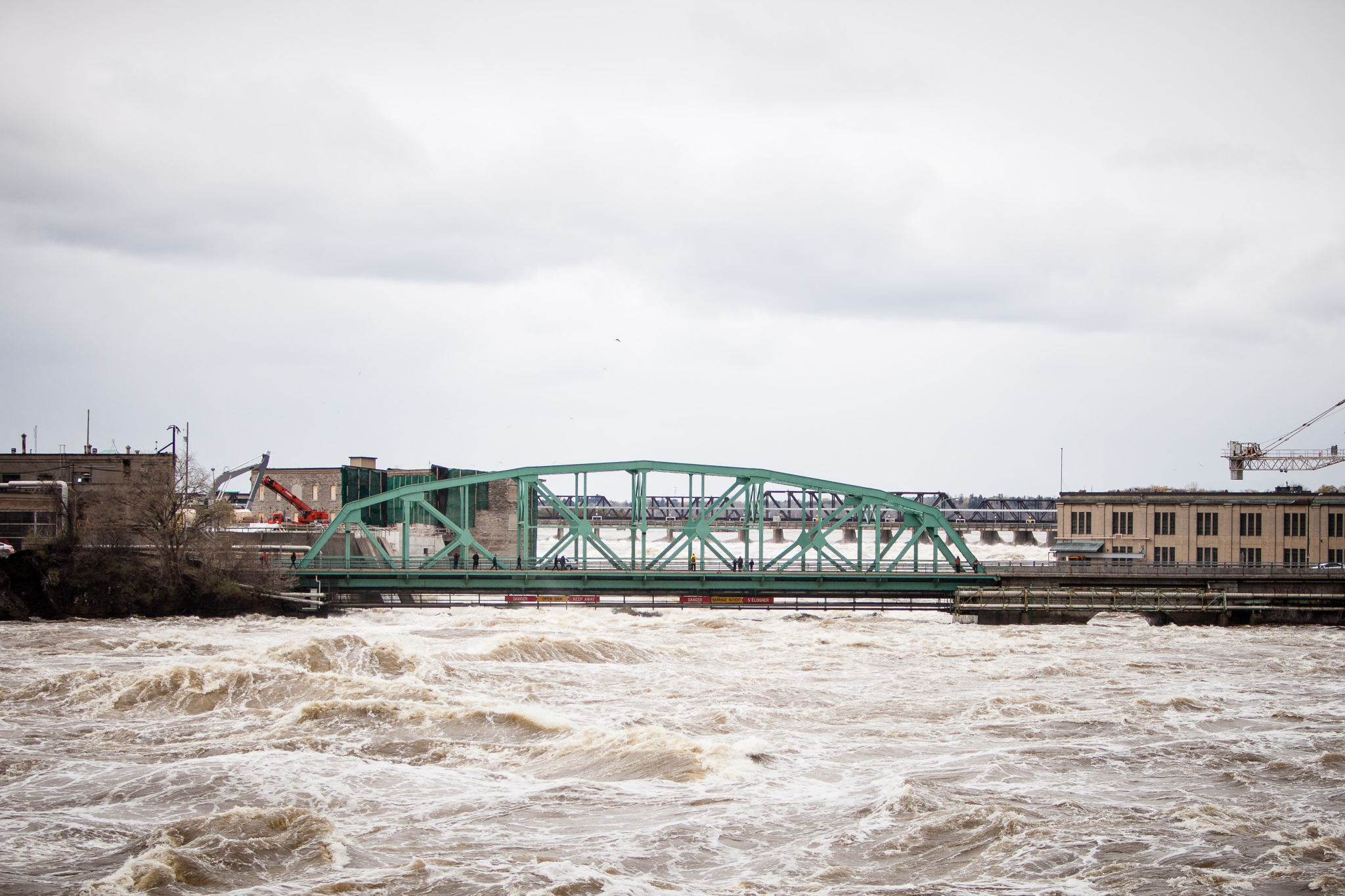 Water levels rise dangerously high below the Chaudière Bridge over the Ottawa River, between Gatineau and Ottawa, following spring flooding on May 8, 2017. File photo by Alex Tétreault
Previous story
Next story

Canada is heating up at double the average rate of the planet, according to a stunning peer-reviewed scientific report involving dozens of government and academic authors, and it is likely that the majority of this warming was caused by human activities like burning fossil fuels.

It found that Canada’s annual temperature over land has warmed on average 1.7 degrees Celsius between 1948 and 2016, while the average winter temperature has increased by 3.3 C. Although not uniform, that’s much more dramatic than the average warming around the world of between 0.8 C and 1.2 C as assessed by the Intergovernmental Panel on Climate Change.

For Northern Canada, the number is even starker: the region has warmed by 2.3 C, about three times global warming.

It also found more than half of the warming in Canada is "likely" due to human factors like burning fossil fuels such as gasoline that come from oil, gas and coal, which create heat-trapping carbon pollution.

The report is an overview and synthesis of published literature, similar to how the IPCC functions. As a result, it uses careful language to express varying levels of confidence in scientific research.

Overall, the scientists found the effects of climate change evident across the country, and that further warming over the next decades is already baked in due to pollution that has already been released into the atmosphere.

The only question is how extreme future changes will be. Scientists said while some further warming is "unavoidable," the amount "depends directly on global emissions."

"Scenarios with limited warming will only occur if Canada and the rest of the world reduce carbon emissions to near zero early in the second half of the century and reduce emissions of other greenhouse gases substantially," reads the report.

The groundbreaking findings also include the following:

In general, scientists found that Canada will continue to experience greater changes in temperature, snow, ice, permafrost, freshwater, flooding, droughts and wildfires in the years to come.

“The science is clear: Canada’s climate is warming more rapidly than the global average, and this level of warming effectively cannot be changed,” said Nancy Hamzawi, assistant deputy minister for science and technology at Environment and Climate Change Canada.

Hamzawi spoke to media at a technical briefing the morning of April 1. The contents of that briefing were originally under embargo until April 2 at 1 p.m. Eastern Time. However, following the publication of a leaked version of the report on CBC News on Monday afternoon, the government lifted the embargo for all publications.

“Global sea level has risen and will continue to rise. The projected amount of global sea level rise by the year 2100...may exceed one metre,” said Blair Greenan, a research scientist of ocean stressors and Arctic science at Fisheries and Oceans Canada. “Therefore it is expected that coastal flooding will increase in many areas in Canada.”

The report is the first in a series expected as part of the current national climate assessment, called Canada in a Changing Climate, which was first launched in 2017. It covers the physical attributes. Other reports, such as on the impacts to human health and so-called national issues related to financial ramifications, are forthcoming.

As a result, scientists were not given the scope in this report to examine the impacts of global warming on the country’s economy, something the Bank of Canada is now investigating, or how the Trudeau government’s plan to price carbon pollution nationwide might mitigate the pollution that leads to warming.

Part of that carbon pricing system went into effect the same day that the report was released for the four provinces — Ontario, Manitoba, New Brunswick and Saskatchewan — that did not have a climate change plan that reached federal minimum standards.

Why so late? This should have

The science speaks clearly. But somewhat lacking in the climate change discussion is what Canada -- along with other countries -- can and should be doing to adapt to the inevitable. Yes, reducing emissions by whatever means is important in slowing the increase in global temperature. But for example, what about revising building codes and making the massive investments in urban and rural infrastructure that seem critical to enabling Canadians to adapt to global warming/changing climate? What strategies will Canada have to come up with to deal with issues that will surely affect public health in various ways? What policies will be needed to help communities in the North adapt to, for example, geographic, social and ecological disruption that will result (and is already resulting) from a warming environment? The list could go on. A decade and a half or so ago, the then federal Commissioner of the Environment, Scott Vaughn, noted in his report that the Harper government had interfered with the release of a collaborative, scientific, non-partisan report on the need for Canada and Canadians to adapt to climate change. Although I've been watching for it, I've seen rather little from government and business since then in the way of a concerted effort to explain the urgency of the problem and act on it. Too bad. . . .