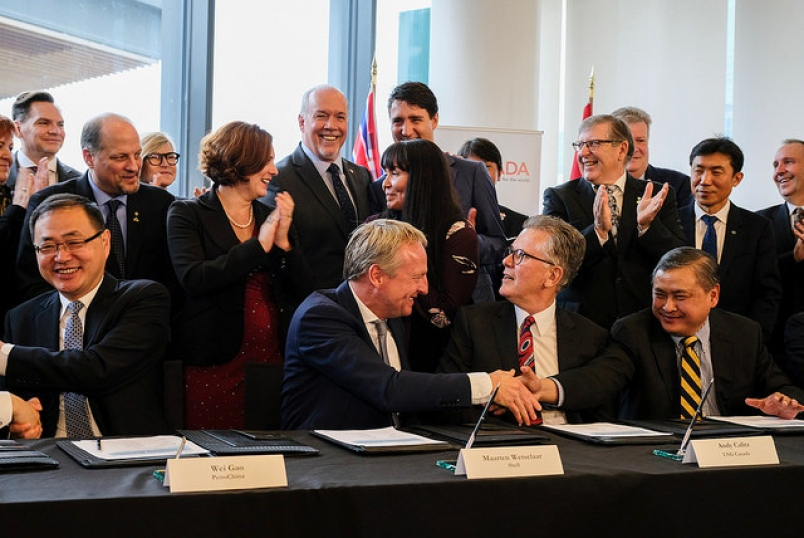 B.C. Finance Minister Carole James managed a smile as she announced that her government was going to proceed even further down the road than its political opponents, the BC Liberal Party, in its support of LNG expansion (and by extension, fracking) in northern B.C.

That is why the Canadian Association of Physicians for the Environment (CAPE) is bringing voices from northeast B.C. — the epicenter of fracking in this province — to the population centres in the Lower Mainland and Vancouver Island. We want to give people in the “sacrifice zone” of fracking and LNG a chance to shatter the distorted uniformity of public and corporate messaging and let people know what’s really going on.

Despite being allied with the BC Green Party, which firmly opposes expansion of the oil and gas industry, the BC NDP under John Horgan has given in to pressure from the fossil fuel sector and large trade unions, lowering the income tax rate for fossil gas producers from 12 per cent to nine per cent in order to entice the global LNG industries to set up shop in the province.

This announcement follows closely on the heels of the government’s introduction of the CleanBC program, which contains some modest attempts to reduce greenhouse gas (GHG) emissions in the province — most of them well off into the future. However these attempts pale in comparison to the substantial increase in GHGs that will result from the massive $40 billion LNG Canada project in Kitimat, approved on October 1, 2018.

The UN’s Intergovernmental Panel on Climate Change says we now have 11 years to limit global temperature rise below 1.5°C, and need to reduce total carbon emissions by 45 per cent by 2030 (over 2010 levels), CleanBC’s goals for reduction in GHG production are far less ambitious, and positioned well beyond that time limit.

Just a little bit shy of the truth

Feeling the need to ignore serious action on climate change has also allowed a singular core of duplicity to creep into the political narrative about LNG Canada’s contribution to climate change.

The NDP (and the BC Liberals before them) have claimed that this massive project will not prevent the province from achieving its 2030 greenhouse gas reduction targets.

LNG Canada is a 'carbon bomb' that will take up around a quarter of B.C.’s entire greenhouse-gas budget for 2030, and two-thirds of B.C.’s 2050 target. It would mean B.C. would have to dramatically decarbonize everywhere else.

And in order to make the claim that LNG Canada can be built without undermining our goals, the government has had to employ a widely accepted but utterly perverse convention.

This convention says that GHGs generated by the burning of fossil fuels outside the borders of a particular political entity – like the province of B.C. – do not count towards that entity’s GHG production.

It’s absurd to think that the government isn’t aware that what burns in Asia effects the atmosphere over Canada — and climate change everywhere. But politically, it looks much better to say that British Columbia’s GHG output is much less by excluding all GHGs generated offshore. And so that’s what B.C.'s politicians say, because it makes them seem to be acting on climate change, when they're not.

So little is known, so much presumed

Methane gas, which leaks constantly from many active and inactive fracking operations, has about 80 times more climate impact than carbon dioxide during the first 20 years it spends in the atmosphere.

So, when governments talk about and LNG, they are really talking about fracking. Just about every unit of liquefied natural gas is created from methane that is extracted from deep below the earth’s surface by this brutal, invasive process.

But the negative impacts of fracking on human and environmental health are poorly understood.

The NDP government is very well aware of how much it doesn’t know about fracking.

In October of last year, the government itself struck a three-person commission to look at just this subject. The commission released its report a few days ago, and to do credit to its authors’ honesty, it is a masterful exposition of our incomplete knowledge of the real impacts of fracking. As Andrew Nikiforuk pointed out in The Tyee, the word “concerns” (as in “worries” or “anxieties”) crops up 130 times, the phrase “sufficient information” 27 times, and the word “unknown” 17 times.

The report contains almost nothing about the impacts of fracking on human or ecosystem health – because the government deliberately omitted these subjects from the commission’s mandate).

The government's handling of the inconvenient findings of the report is classic political bafflegab.

A government press release claims that this report shows the regulatory system "is robust."

What the report actually says is markedly different:

"The very rapid development of shale gas in NEBC has made it difficult to assure that risks are being adequately managed at every step. Furthermore, the Panel could not quantify risk because there are too few data to assess risk. Nevertheless, it is the view of the Panel that the current regulations under many acts appear to be robust. At the same time, insufficient evidence was provided to the Panel to assess the degree of compliance and enforcement of regulations." (Emphasis added)

The Canadian Association of Physicians for the Environment, an organization I helped to found nearly 25 years ago, is deeply concerned about the health and environmental impacts of industrial activities like fracking. In fact, in terms of health issues, impacts on human health and impacts on ecosystem health cannot really be separated from one another.

This message has been repeated over and over again to European settlers and others by Indigenous spokespeople, and we have ignored it.

CAPE is staging a five-city tour of the Lower Mainland and Vancouver Island – in Comox, Victoria, Squamish, Vancouver and Coquitlam – bringing a doctor, farmers, and environmental consultant, a renewable energy expert and, of course, representative leaders from Indigenous nations, to lay out what it’s like to live face to face with the fossil fuel industry, an industry flush with a sense of historic entitlement, but now beginning to sense that its role is fading. Theirs is a story of lives disrupted or destroyed, of environmental damage and health harms, and of an industry that barely gives them lip-service -- or rides roughshod over their concerns.

There is a cost

Given the context of forest fires, intense flooding, the disruption of extreme weather events, it's inevitable that Canada will have to reduce its dependence on fossil fuels like LNG.

In the 2017 forest fire season, the Thompson Nicola Regional District lost an estimated $31 million in business and personal revenues dues to fires alone.

It is now clear that 2018 was a worse season for wildfires, leading the provincial government to declare a state of emergency.

It's past time to act

It’s time for us all – and especially for our political leaders – to stop dithering and start working hard to protect the planet for the sake of future generations.

Thunberg and her peers know the price they will pay for political passivity and paralysis today. And their words are underpinned by the leading scientists of our day.

We must heed her words, and theirs, and also the stories of those directly harmed by fossil fuel extraction, and we must act.