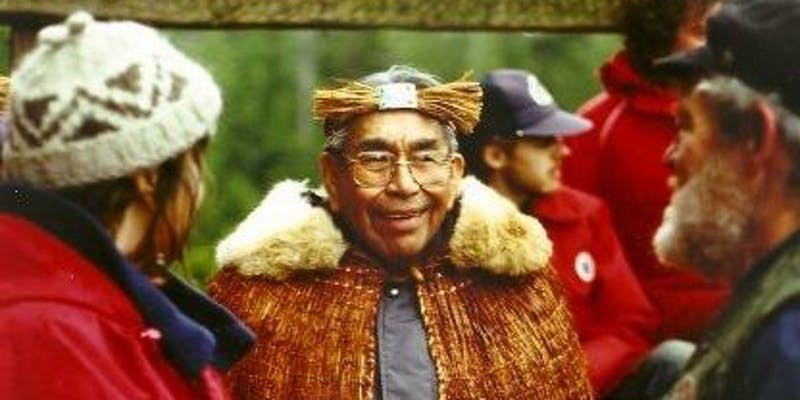 Forward-thinking wisdom of chiefs and elders

Eli Enns says the first Indian agent that came to Tla-o-qui-aht territory on the Pacific coast at Vancouver island was a fella named Harry Giliod.

Enns is a Nuu-chah-nulth political scientist and internationally recognized expert in bio-cultural heritage conservation, and he’s now the main organizer of an April 2019 celebration that marks 35 years of the Meares Island Tribal Park -- an Indigenous-led protected area.

The Meares Island Tribal Park, located in Clayoquot Sound, on the north west coast of Vancouver Island, was the first formally declared Tribal Park for the Tla-o-qui-aht, from the four that exist today. Enns wanted to take the opportunity to uphold the foresight of the elders and chiefs in 1984 at the time of declaration, as well as the community’s continued conservation efforts and visions for the future. The anniversary party will take place on April 17, sandwiched between three days of educational workshops around Indigenous-led conservation, held in Victoria. 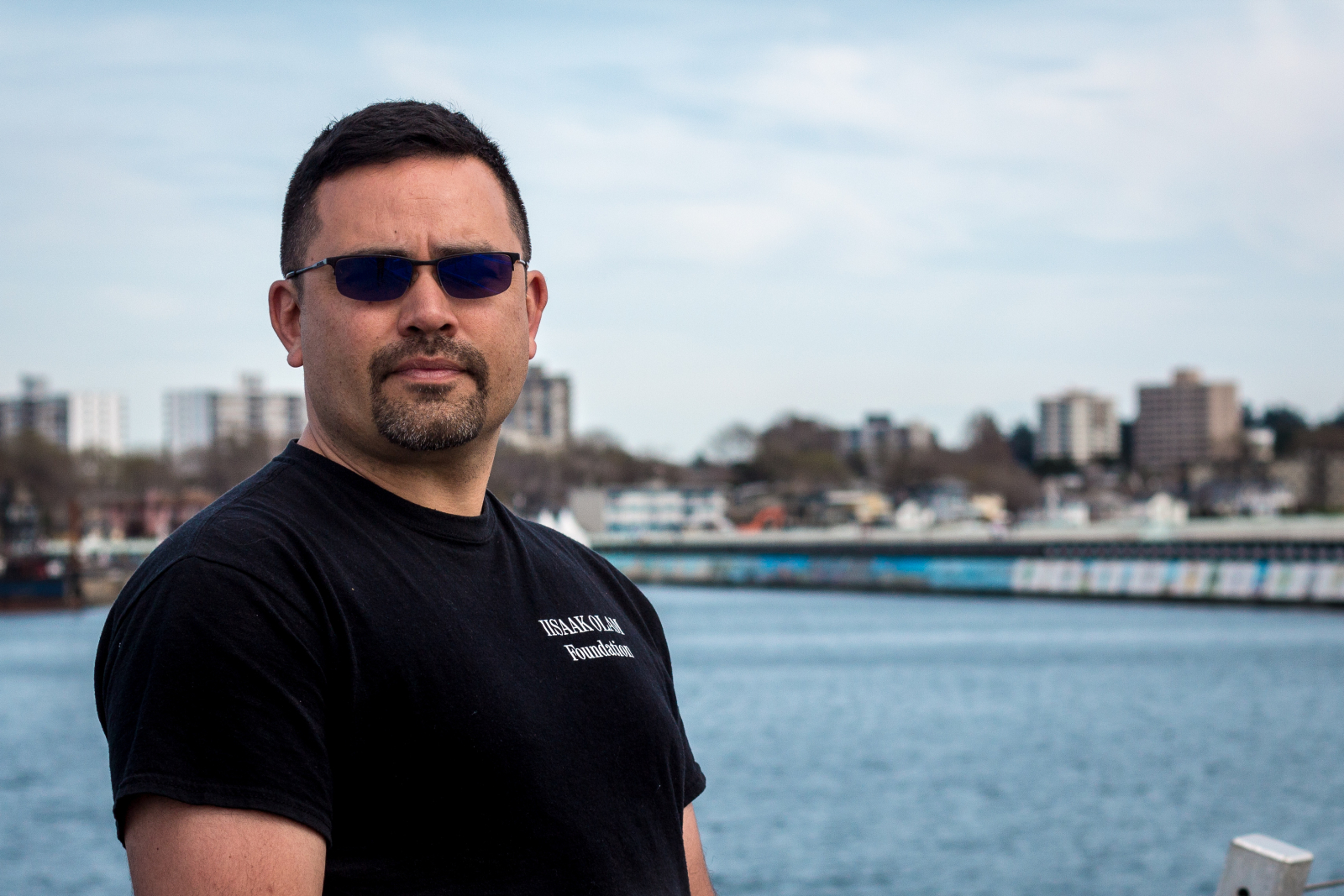 Eli Enns, president of Indigenous Circle of Experts, believes everyone's time would be better spent on "projects we can work together and agree on," he said in an interview on April 2, 2019. Photo by Emilee Gilpin

Nuu-chah-nulth people have lived on and cared for their territories since time immemorial, as entrepreneurs, stewards and members of distinct nations. Photo by Peruzzo

I spoke to Enns at Ogden Point in Songhees territory (Victoria) on Tuesday, and he took me back in time, explaining what life was like on this territory in the 1700s.

“The first contact between Indigenous peoples and Europeans on the west coast of Vancouver Island didn't happen until the 1770s,” Enns began. “There was a period of successful fur trading, but also many conflicts between newcomers and Nuu-chah-nulth peoples well into the early 1990s.”

In the 1880s, Enns explained, Indian agents were delineating reserve boundaries. When chiefs and elders expressed their concern, Gilliad, that first agent, arrived and attempted to reassure them, Enns said.

“Mr. Gilliod said not to worry, you can continue living your life, no foreigners would want to settle here, because the weather is too wild for agriculture,” Enns said. “That’s where it stood… there was a level of trust at that time.”

From 1909 to 1984, he said his people “lost control of their lands and waters.” The residential school system grew (the last residential school in B.C. didn’t close until 1996) and settlers imposed the British North American Act (1867), which prohibited Indigenous laws, ceremonies and cultures.

By the 1980s, logging companies were devastating old growth forests on Meares Island, and the government failed to recognize Indigenous sovereignty over traditional territories which were never sold, ceded or surrendered to Canada, Enns explained.

In the early 1980s, people were increasingly charged and jailed for being "outside of the reserve boundaries," he added.

In 1955, most of the island’s forests were involved in two tree farm licenses, and massive clear-cutting. MacMillan Bloedel Limited obtained permits to log on the island, but in 1984, Nuu-chah-nulth land people stood together to block loggers.

People from the Tla-o-qui-aht and Ahousaht First Nations, two distinct communities of the Nuu-chah-nulth nation, bonded together to protect their territories and at the time, Enns said his uncle Moses Martin (Tla-o-qui-aht’s elected chief at the time) had invited the newcomers, the loggers, to feast and learn about their laws, customs and land.

Moses knew from his people’s ceremony and laws that the people coming to take from the island weren’t necessarily bad people at heart, but were misinformed, and that misinformed people can behave very badly. The medicine then, was education, he said, which is what the community tried to provide at the time, likening their sacred territory to the Christian understanding of a “garden of Eden” or ‘Wah’nah’juss Hilth’hooiss (our garden).

“We’d like to welcome you and invite you for a meal, but you have to leave your chainsaws in the boat,” Enns recalled his uncles’ words at the time.

Failing to reach a level of understanding about the need to protect the largest trees in Canada, Moses Martin resorted to joining the others, to stand on the logging blockades, declaring the island a Tribal Park.

The fight to protect the land and waters continued to attract allies from all directions in the years following 1984.

“There was an influx of hippies, draft-dodgers from the Vietnam War, civil rights activists, women’s liberation rights activists, environmentalists…” Enns said. “That whole movement to protect Meares Island brought people from down south and from out east to the west coast.”

Thousands of Canadians descended on Vancouver Island’s Clayoquot Sound in 1993 to take part in what was the largest act of civil disobedience in Canadian history.

Stories about the 1984 Meares Island Tribal Park declaration, Clayoquot Sound protests, and the continued efforts to assert jurisdiction in the nation’s territories will be shared at the White Eagle Hall in the provincial capital, Victoria, on April 17.

The feast will welcome Indigenous leadership from other nations, as well as celebrated environmentalist David Suzuki, who has been a vocal supporter of Indigenous-led conservation efforts in Canada. There will be performances by Cree musician Art Napoleon (who is also co-host of APTN show ‘Moosemeat and Marmalade’) and others, in the spirit of celebrating the progress of the past 35 years, and casting another vision of traditional stewardship into the future.

The Tla-o-qui-aht tribal parks are an act of self-determination, sovereignty and traditional stewardship between the land and the peoples who have lived there since time immemorial. Photo by Peruzzo

Opisaht village, is on the southwest side of Meares Island. Photo from April 21, 2018 by Peruzzo

'Tribal park' was the closest translation

After declaring Meares Island a tribal park in 1984, the Tla-o-qui-aht extended parks declarations to Ha'uukmin (Kennedy Lake) in 2007. On the 30th anniversary of 1984's historic events, they declared Tranquil Creek and Esowista (one of three Tla-o-qui-aht communities, located on Long Beach) Tribal Parks.

Commitment to traditional stewardship and governance has led to many innovations over the years, including three clean energy projects, new housing units, and salmon spawning pools, Enns said.

Jack Woodward represented the Tla-o-qui-aht and Ahousaht First Nations in their 1984 court proceedings to protect Meares Island. In recent years, he has recommended thinking of a tribal park, from a Canadian legal perspective, as "a constitutional park.” Provinces make provincial parks, feds make national parks, and Indigenous peoples can create tribal parks.

"It's also a model for bio-regional economic development," Enns said, "and what I call peaceful commerce.

Enns, or 'Grandpa Eli,' as he calls himself, is the "Chief problem-solver" at Iisaak Olum Foundation (IOF), which works to conserve biological and cultural diversity through Indigenous economics and meaningful reconciliation.

Enns has been part of a team working out how to implement the findings of a report by the Indigenous Circle of Experts (ICE). ICE, comprised of Indigenous climate experts, was created to support Canada’s commitment to renewed relationships that respect the rights, responsibilities and priorities of Indigenous peoples.

The circle of experts produced a report with recommendations and guidance on Indigenous Protected and Conserved Areas (IPCAs) for consideration by Indigenous, federal, provincial and territorial governments to inform policy.

The group held four regional meetings in all four directions, in Tla-o-qui-aht, the Great Bear River First Nation in Mi’kma’ki, the Yellowknives Dene First Nation, and the homeland of the Métis Nation and the traditional lands of the Anishinabe (Ojibway), Ininew (Cree), Oji-Cree, Dene and Dakota at the Central Regional Gathering.

Throughout their research, the group framed an idea of an “ethical space,” which Enns described as a "thought-exercise for how Indigenous knowledge systems and western science could work together to conserve biodiversity.”

(You can read more about the ethical space on pages six and seven of the ICE’s ‘We Rise Together’ report.)

As a part of the 35th anniversary celebration, Enns is involved in administering three days of workshops in Victoria, where participants interested in conservation can learn about Indigenous governance and ways in which it can be supported.

The workshops will explore the “ethical space” where people have more in common than they differ, Enns said, and where participants can learn about national, international and Indigenous policies and laws that might strengthen collaboration.

The workshops will examine the United Nations Declaration on the Rights of Indigenous Peoples (UNDRIP), the 94 calls to action in the Truth and Reconciliation Commission of Canada, Section 35 of the Constitution, and all of the Peace and Friendship Treaties signed by eastern nations and the Crown in the 1760 and 1770s.

The circle of experts practices adaptive methodology, meaning they tailor their approach to the subject at hand, which in the case of tribal parks, calls for a closer examination of the UN Convention on Biodiversity.

It's a "beautiful space," Enns said, where different minds can come together as partners in the world of conservation, where environmental groups can support Indigenous-led conservation, such as tribal parks, and make reconciliation mean something.

Moving forward, Enns said he wants to see tribal parks appropriately recognized, so that Indigenous peoples can continue living their lives and upholding their laws, cultures, and associated responsibilities, for everyone's benefit.

While the district of Tofino has been supportive of the Tribal Parks (Tofino used to be traditional Tla-o-qui-aht territory, before people were moved to their village of Opitsaht on Meares Island), the provincial and federal government have not yet “appropriately recognized” Tla-o-qui-aht jurisdiction, Enns said.

Some tourism companies, like West Coast Wild zipline, have begun to charge visitors an ‘eco-tourism service fee’ which go directly to the tribal parks program.

It’s a good start, Enns said, since Indigenous peoples have experienced the negative impacts of colonization, assimilation and capitalism, but want to be involved in the economy in an ethical and sustainable way. 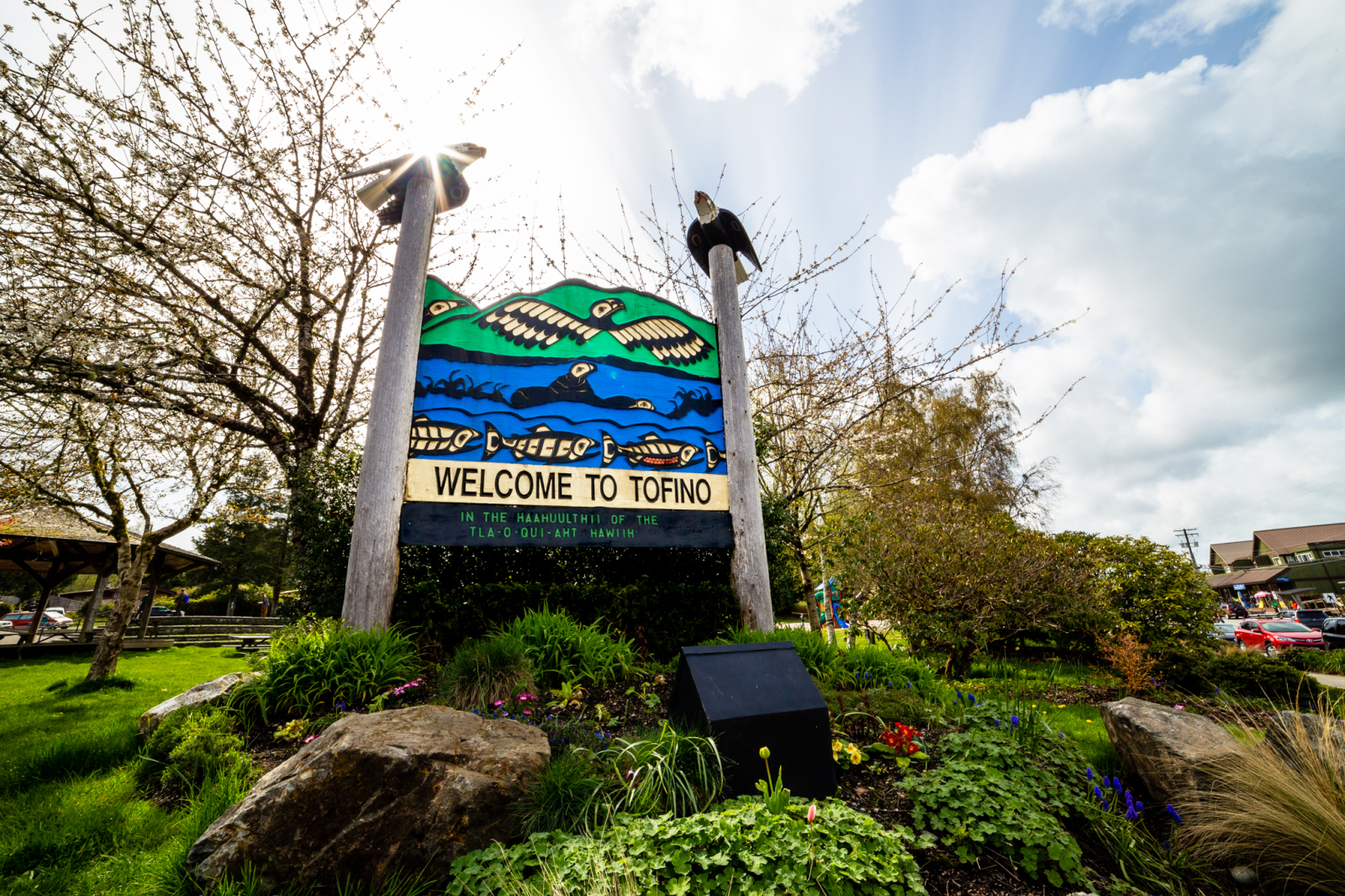 Tofino is situated on the traditional territory of the Tla-o-qui-aht nation and the district is finding new ways to work together for a mutually beneficial future. Photo by Peruzzo

Tla-o-qui-aht territories, where four tribal parks have been declared, and where everyone who visits benefits from conservation and protection efforts of the Nuu-chah-nulth peoples and allies, for generations. Photo by Peruzzo

Imagine what we could achieve

There's an argument that says we need provincial or federal legislation to make tribal parks legitimate, Enns said, but people forget that Indigenous peoples already have legitimate legal authority to create tribal parks and protected areas. Indigenous peoples rights and title exist in their own distinct legal systems, internationally, nationally, and regionally (UNDRIP, Sec. 35, and so on.)

What needs to happen now, he said, is for the bureaucrats and staff of numerous provincial and federal ministries with “their hearts and minds in the right place” to rise above a “hectic, controversial political climate” and respond with appropriate recognition of such moves.

"There has been a lot of progress made in regards to reconciliation, specifically related to parks and protected areas, but where the feds and provinces struggle, is on appropriate recognition," he said. "When an Indigenous nation steps forward and declares a tribal park or an Indigenous Protected and Conserved Area, it's now in the ball court of the feds and the provinces to determine how they're going to respond. What we're encouraging them to do, is to respond with appropriate recognition."

Enns’ defined appropriate recognition as an understanding that Indigenous peoples are “creators, governors, and managers” of their territories.

Appropriately supporting Indigenous governance won’t just benefit the communities themselves, but it benefits all Canadians, Enns said. If people hadn’t stood up together at the Clayoquot Sound protests decades ago there would be nothing to protect today, and the cooperation will need to continue into the future, Enns said.

"You think about the amount of progress we've made in the last 35 years...Imagine what we can achieve in the next 40 years, and then it will be 75 years where we're back in control of our lands and waters to reflect that 75 years of lost control over our lands and waters," Enns said. "If we work together, we could go so far, because we wouldn't be spending time and energy on lawyers and court processes, blockades and so much money, time and energy into conflict."