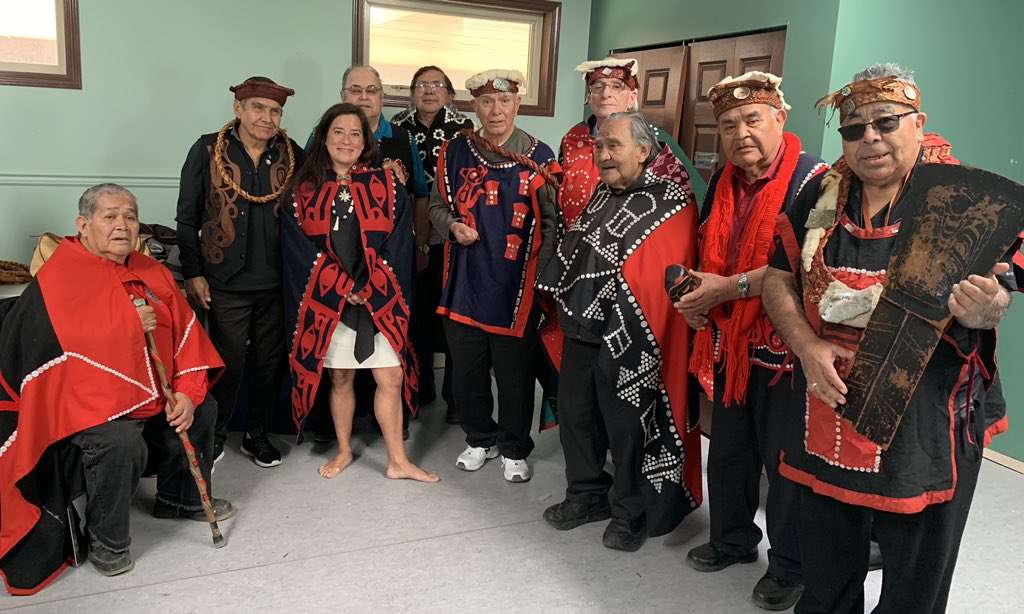 Just days before Jody Wilson-Raybould was kicked out of the Liberal party by Prime Minister Justin Trudeau earlier this week, she was back in her homelands, standing side-by-side with family and community members, being blessed and affirmed in the KwinWatsi Big House on Vancouver Island.

Wilson-Raybould, the former attorney general and minister of justice, is an Indigenous woman before she is a Canadian politician, her father Bill Wilson told National Observer in a phone interview on Friday, and her actions throughout her career, especially in recent years, are a representation of the way she was raised, he said.

"She was chosen by my mother when she was very young and given a name that means 'person of noble birth and truth-teller," Wilson said, referring to the name Puglaas, which Wilson-Raybould uses as her Twitter handle and to sign off on some of her recent letters to constituents, committee and caucus.

"That's the way she was raised long before she went to university, law school, or became a cabinet minister," he said.

Wilson (Hemas Kla-Lee-Lee-Kla), a Kwakwaka'wakw hereditary chief, said his daughter has lived up to the name his mother gave her.

Wilson-Raybould resigned from the Liberal cabinet earlier this year, after being shuffled out as attorney general, and in protest at what she has since testified was inappropriate political pressure on her to intervene to defer the prosecution of Quebec-based engineering and construction company SNC-Lavalin on corruption charges.

A truth-teller from a long line of matriarchs

Speaking to the House of Commons justice committee on Feb. 27, Wilson-Raybould said her experiences has been shaped as an Indigenous person, an Indigenous leader.

"I was taught to always be careful what you say, because you cannot take it back. I was taught to always hold true to your core values and principles and to act with integrity. These are the teachings of my parents, my grandparents and my community," Wilson-Raybould said to conclude her speech. "I come from a long line of matriarchs and I am a truth-teller, in accordance with the laws and traditions of our Big House. This is who I am, and this is who I always will be."

"We have laws going back 100,000 years, that we still maintain and live up to," Wilson said. "Jody is upholding the rule of law, imposed by the white people, but she's reacting on the basis of honesty and integrity, on the basis of her own laws."

During the feast last weekend in Campbell River, Wilson said his daughter was thanked for what she has done and blessed with good wishes for her future.

The father of former attorney general @Puglaas said his daughter has lived up to the noble name she was given young. "Jody is reacting on the basis of honesty and integrity, on the basis of her own laws," Bill Wilson told @natobserver

After weeks of bitter recriminations, behind-the-scenes negotiation, and sourced and unsourced media reports and opinions on the character of all the principal players in the drama, Wilson-Raybould and Jane Philpott (who had also resigned cabinet in protest at the government's handling of the file) were finally told this week they were no longer welcome. Wilson-Raybould continues to stand by her actions, as she says she was ensuring the independence of the justice system and upholding democratic values fundamental to Canada's identity.

Wilson wasn't surprised by Trudeau's decision to kick his daughter and Philpott from caucus. He saw it coming, he said, because "if you don't kiss the emperor's ass, you're going to get in trouble."

Wilson isn't unfamiliar with Canadian politics, having been involved in constitutional talks in the 1980s after becoming the second Indigenous man to graduate from the University of British Columbia's law school, also his daughter's alma mater.

He said the prime minister, who "inherited his mother's good looks, but not his father's intellect," has made a mess of his bed, making room for the Conservative party to win this year's election.

"Sadly, we'll probably end up with another four years of conservative right-wing Christian government, and it won't do anything for Aboriginal people," Wilson said. "The money should go to Aboriginal people in the community to do things on their own accord, based on their own values and systems."

When asked why he thinks Trudeau gave the task of developing a new reconciliation framework to Carolyn Bennett, the minister for Crown-Indigenous relations, and not to Wilson-Raybould, he said he suspected that the prime minister feared allowing Indigenous communities to choose their own leaders.

"Indian business is a big business. $100 billion every year for lawyers, consultants, and other staff, yet only nine cents of every dollar get to the communities," Wilson said. "Jody was willing to make changes through a principles document that would see Aboriginal people in the communities choosing their own leaders, as opposed to the puppets."

The hereditary chief said this fight is far from over, but he's confident in his daughter's ability to continue to act with integrity.

In a recent Facebook post Wilson said that his daughter is who she is because of four women; Jody's maternal grandmother Irene Hindle, who helped to nurture her with love and kindness; Sandy Raylene Hindle, her mother, who raised Jody and her sister "with little help from me;" and his own mother and her sister, who stood with her "through thick and thin."

Mr Wilson suggested that his

Mr Wilson suggested that his daughter Jody Wilson raybould got in trouble because she didn't kiss the emperor's ass . With all due respect ,with all of the condition's that Jody Wilson Raybould expected , I wonder who's ass was to be kissed !

Only a 'girl' would bring her

Only a 'girl' would bring her father into a controversy of this kind.

So its not just me who sees

The Liberal government’s crisis is a crisis of liberalism