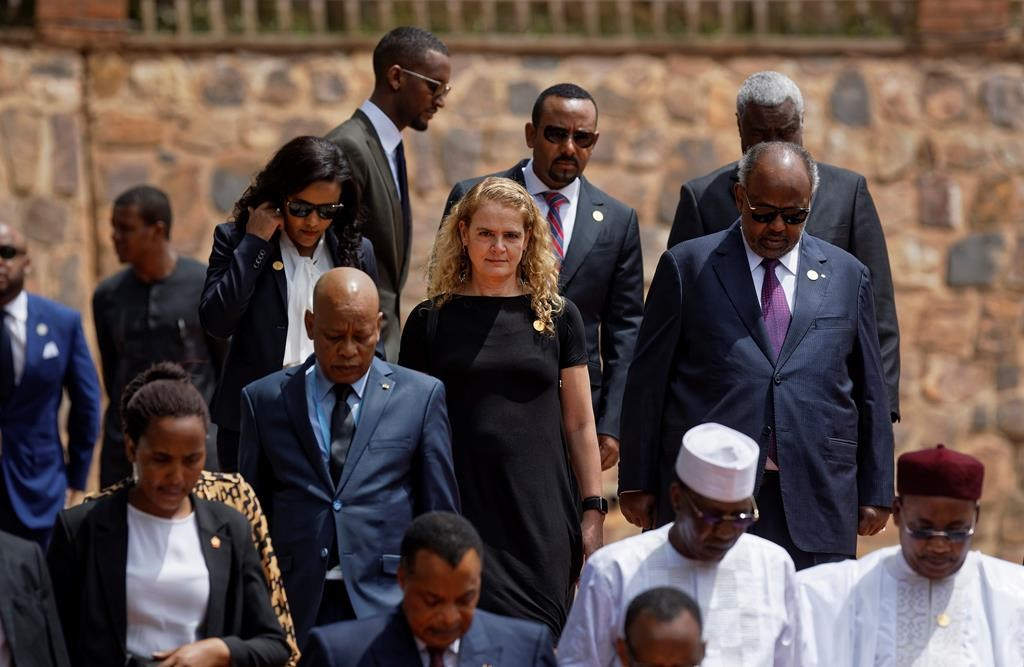 Governor General of Canada Julie Payette, center, arrives to lay a wreath at the Kigali Genocide Memorial in Kigali, Rwanda on Sunday, April 7, 2019. Photo by The Associated Press/Ben Curtis
Previous story
Next story

Gov. Gen. Julie Payette laid a wreath at a memorial in Rwanda's capital on Sunday to mark 25 years since the start of a genocide that left an estimated 800,000 people dead.

Payette, who is leading a Canadian delegation on a four-day visit to the east African country, visited the Kigali Genocide Memorial that is the final resting place of roughly 250,000 victims of the genocide.

She told The Canadian Press in a phone interview that the ceremony served a dual purpose: to pay tribute to the victims, while bringing in a "sense of renewal" to what she described as an energetic, vibrant country.

"Twenty-five years is a good time to start thinking about the future," she said, noting that an estimated two-thirds of the country's population is under the age of 30.

"Many of them weren't born during the genocide, so there is an absolute necessity to not forget ... but also to move forward. And they seem to be doing that, which is amazing."

Sunday marked the 25th anniversary of the start of the ethnic slaughter that mainly targeted members of the Rwanda's Tutsi minority.

The mass killing was ignited on April 6, 1994, when a plane carrying President Juvenal Habyarimana was shot down and crashed in Kigali, killing the leader who, like the majority of Rwandans, was an ethnic Hutu.

The Tutsi minority was blamed for downing the plane, and bands of Hutu extremists began slaughtering the Tutsi, with support from the army, police, and militias.

Canada had a peacekeeping force in Rwanda during the mass bloodshed.

Ethnic reconciliation has been a cornerstone of the rule of Paul Kagame, Rwanda's de facto leader since the genocide ended in July 1994 and the country's president since 2000.

Payette said the Canadian delegation was particularly touched by the unity on display during Sunday's commemoration.

"They've decided not to retaliate. They've decided to work together and to reunite, reconcile and forgive. And I tell you, not every society can do that, and that's a model," she said.

In a statement earlier in the day on Twitter, Payette offered Canada's sympathies to Rwandans as well as peacekeepers from Canada and elsewhere who she said "lost so much" in the massacre.

Prime Minister Justin Trudeau also released a statement marking the solemn anniversary of what he called "one of the darkest chapters in recent history."

He said the genocide showed the "unconscionable cost of division and hatred," and urged Canadians to take time out of their days to remember the victims.

"We can honour them by fighting hate, protecting the most vulnerable, and working to make our world a better one," Trudeau said.

In Montreal on Saturday evening, several hundred people attended a ceremony at a library in memory of the victims of the genocide, the city said.

Another ceremony on Sunday was to take place in the city's Old Port area, to be followed by a march and wreath-laying in solidarity with the victims and their loved ones.

— with files from Adam Burns in Toronto, Morgan Lowrie in Montreal and The Associated Press