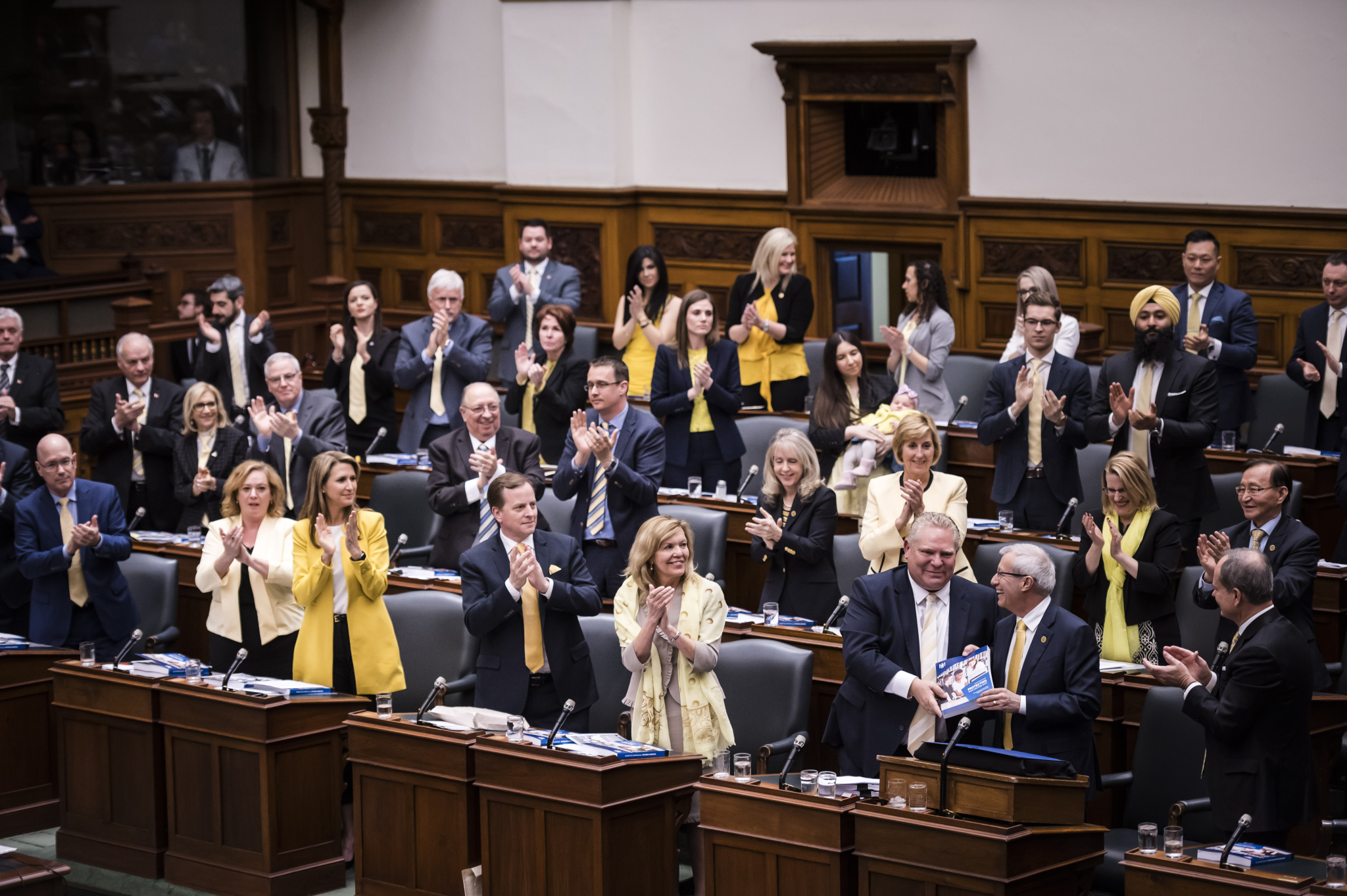 The Ford government's budget proposal to cut financial support for people who need legal services is the largest cut of its kind and will result in the elimination of many provincial legal services for refugees and immigrants.

The cuts to Legal Aid Ontario (LAO) are the first in 15 years and they come as provincial spending on legal aid for refugees has seen an uptick due to the increase in the number of asylum seekers coming to Ontario across the U.S.-Canada border.

But the Ford government’s first budget, tabled on Thursday by Ontario Finance Minister Vic Fedeli, claimed that the federal government should shoulder the responsibility for providing legal services for Ontario’s immigrants and refugees.

Last year, the federal government increased funding to LAO by $8.9M ($7.1M of which was a one-time contribution and $1.8M for two years) to help with the increasing demand of people accessing refugee and immigrant services. This means the federal government funded 39 per cent of LAO’s refugee and immigration cases, compared to 72 per cent in British Columbia and 90 per cent in Manitoba.

Last month, Ontario’s Conservative government asked us to increase funding to legal aid in the province, because they know that legal aid helps protect Ontario’s most vulnerable. Yesterday, they choose to cut legal aid funding by 30% anyway.

While the federal government increased funding for LAO, it also proposed to a new ground of ineligibility for refugee protection in its March budget. If an asylum-seeker has previously opened a claim for refugee protection in another country, his or her claim would be ineligible for consideration. Lawyers who spoke to National Observer expressed concern that Charter rights would be at risk between Ontario's funding cuts and the federal government's stricter refugee controls.

"The federal government's policy will result in refugees being denied rights to hearings, which means they is more reason they will need access to legal aid," said Avvy Go, director of Chinese and Southeast Asian Legal Clinic in Toronto. "It doesn’t excuse the province to cut legal aid in light of this."

David Field, LAO’s CEO, said Ontario's legal aid cuts were “higher than expected” but the organization understood that the province was no longer willing to cost-share with the federal government in the matter of refugee and immigrant services from the beginning of the Ford government’s mandate.

“Unfortunately we’re stuck in the middle of this,” he said in an interview.

“The pressures that we’ve been facing as an organization are usually based on increases in the demand for services,” Field said in an interview. “This is a bit unusual.”

“We’re just trying to live within the funding we have,” Field said, adding that he’s “hopeful” the federal government will provide more to compensate for the provincial cut.

‘The number is the number’

LAO’s funding has been increasing steadily for the last two decades. There have been two cuts since the turn of the century. The Ontario government cut $29 million in 2000-2001 and then it cut $2 million 2004-2005, making Ford’s moves unprecedented in recent times.

Field, the LAO CEO, said he doesn’t currently know whether the cuts will impact any jobs but the focus for LAO is to continue offering their services to the best of their abilities.

“The number is the number,” he said. “Clearly we’ve been told that there are issues about addressing immigration and refugee services.”

LAO issued 13,687 certificates for immigration and refugee services last year, roughly 13 per cent of the total number of certificates issued. It issues these certificates to low-income people to help pay private-practice lawyers to take on their case.

The cases include a range of services from refugee and immigration appeals to refugee protection hearings to federal judicial reviews. There was an almost 62 per cent increase in how many people are accessing these services between 2012 and 2017, according to the most recent refugee and immigrant annual report. The majority of these services are accessed in Toronto, followed by Hamilton and Ottawa.

The number of refugee claims in Canada has increased by more than five times since 2013, according to Immigration and Refugee Board of Canada statistics.

Last year, the refugee and immigration program cost just over $25 million, up 10 per cent from the year before, according to LAO’s annual report.

Avvy Go, director of Chinese and Southeast Asian Legal Clinic in Toronto, told National Observer these immigration and refugee legal aid services are not just for people coming to Canada but for Canadians trying to access services to sponsor family members or refugees and more. The province’s justification that these services should be funded by the federal government is “not an excuse for them to cut it.”

The cuts reflect a lack of knowledge about immigration and refugee services by the government, according to Go.

“These cuts are devastating,” she said. “I don’t know how this effect individual legal clinics… but any time you talk about cuts to legal aid, those most affected are low income people, and disproportionately those are women, people of colour, Indigenous peoples and other vulnerable members of our society.”

‘Direct threat to justice in Ontario’

The province cited the Auditor General’s 2018 report as another reason for the cuts. But, the report notes that an increase in immigration and refugee cases, as well as fluctuating federal funding, are causing some of LAO’s financial shortcomings. “If federal funding was more predictable or stabilized, Legal Aid Ontario would be able to better plan and budget accordingly.”

Finance Minister Fedeli justified the cuts to legal aid in his budget as an effort to “modernize” how justice services are delivered, which many in the legal industry have long advocated for.

Toronto lawyer Omar Ha-Redeye said that he was encouraged by the budget’s commitment to modernizing the province’s legal services, but worried that the cuts to legal aid will counter that.

“But, it won’t matter how modern the justice system is, if people can't access it,” he said in an interview.

Anthony Morgan, a Toronto human rights lawyer who previously worked with legal aid, said that the cuts would “heighten conditions of crises in communities where people aren’t being served already.” Morgan foresees the cuts translating to more people being “unjustly deported” or “unjustly imprisoned.”

“This is not evidence-based policy,” he said in an interview. “This is hope-and-see policy making.” Morgan added that the cuts “demonstrated a callous indifference” to the realities of Ontario’s most vulnerable communities.

The #onbudget cut of 35% ($133M)to Legal Aid will have a significant negative impact on legal aid services for refugee claimants and immigrants. Also on the community legal clinics system. #JusticeAccess

The County of the Carleton Law Association (CCLA) — the largest local legal association in Ontario — said the cuts were a “direct threat to justice in Ontario.”

“The economic justification for these cuts is highly questionable,” said CCLA spokesperson Katie Black in a statement. “By law, the Ford government is not just a denial of justice, but it is also one of the laws of the land. The impact on the administration of justice will be felt across the province.”

The Canadian Association of Refugee Lawyers and the Refugee Lawyers Association (CARL) said they were "alarmed" by the cuts. In a statement co-signed by several refugee, legal and advocacy groups, the association said the elimination of funding was "counter-productive and will lead to backlogs and delays throughout the justice system, as most people cannot navigate their cases alone."

"The cuts will cause chaos in the courts and at refugee tribunals and will cost taxpayers more, not less," they said, urging the Ford government to "reverse this unilateral decision" to protect the rights of Ontario's most vulnerable groups.

Refugees are one of the groups who need Legal Aid the most, the association noted, with refugee claimants often not having the ability to represent themselves in Canada’s complex refugee determination system.

“At this time, refugee laws are growing increasingly restrictive in the face of multiple global humanitarian crises. Refugee claimants must navigate a complex system while dealing with language barriers and extreme personal trauma,” says Aris Daghighian, a member of CARL’s National Executive.

The Ford government is cutting over $2.5 billion in funding to 14 provincial ministries in Ontario. The biggest cut came to Indigenous Affairs, which is set to lose nearly half its budget. The ministries of Environment, Parks and Conservation; Municipal Affairs and Housing; and Natural Resources and Forestry also losing $643.9 million combined.

In Trudeau's virtue signalling world a budget debt of 325 billion dollars is of no particular significance. It is.