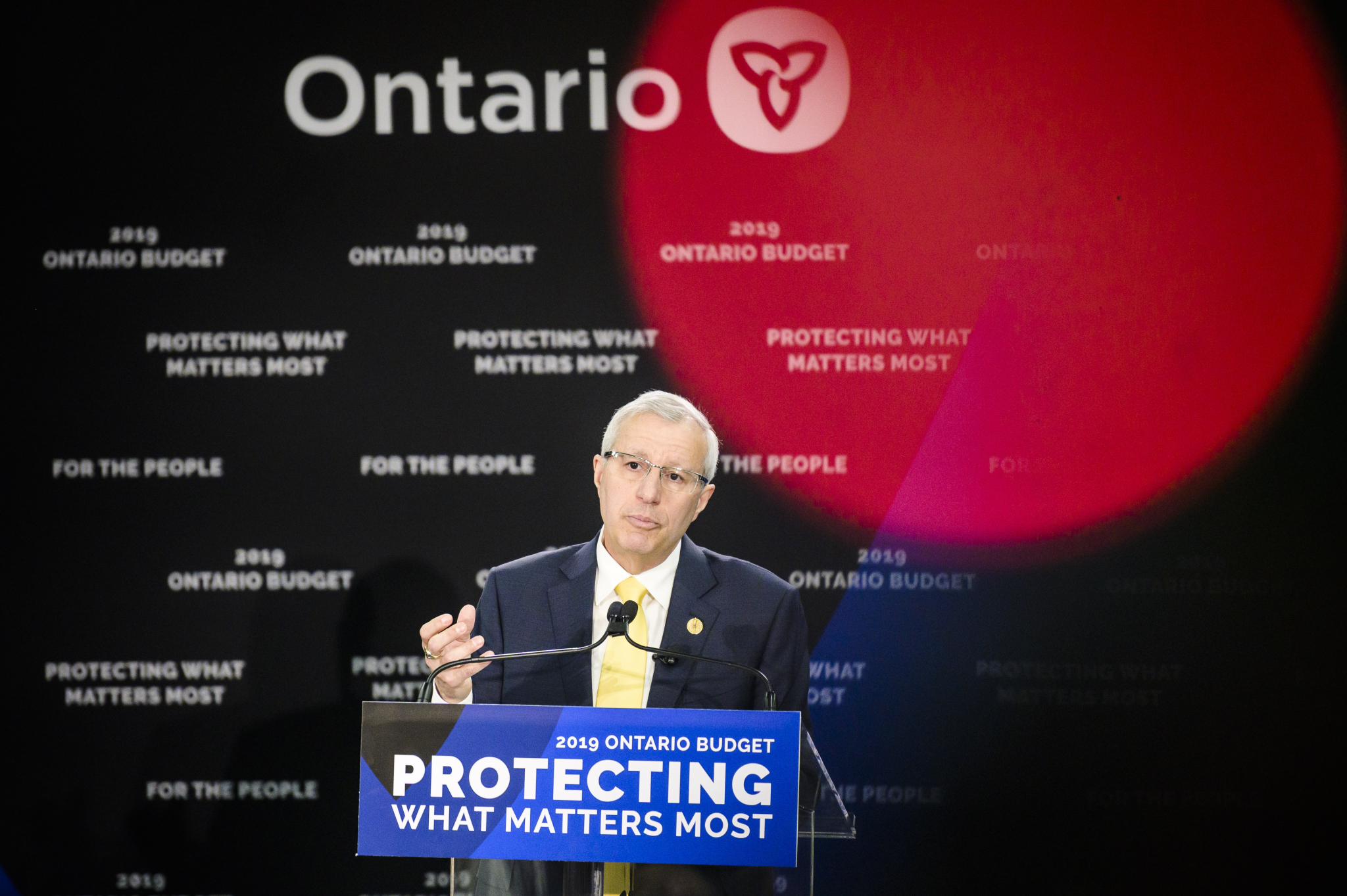 The Progressive Conservative provincial government of Premier Doug Ford released its first budget on Thursday, a document that was heavy with references to cutting bureaucratic red tape but light on detailed financial costings.

The 2019 budget forecasts that Ontario’s public account will not reach balance until 2023–24, one year earlier than the prior Liberal government of Kathleen Wynne had proposed but beyond the term of the government’s mandate, breaking one of Ford’s key election promises.

“We’re transforming our government today,” Finance Minister Vic Fedeli told reporters before tabling the budget in the legislature. “We’re reinventing our government–how we work, how we think–we’re modernizing, we’re digitizing. These are numbers that you can trust.”

Ford plans to spend roughly $163.5 billion next year — the most expensive budget plan in Ontario’s history. The previous Liberal government spent $143.1 billion in 2016-17, an amount that Ford has criticized extensively.

“No wonder they got rid of the child advocate and the environmental commissioner when you’re going to make the deep cuts that they are making to those areas,” Green Leader Mike Schreiner said outside the legislature. “They are the people that would have called it out, would been the watchdogs, would have talked about the implications of those cuts in their reports.”

(For National Observer interviews with the former child advocate and environmental commissioner, click here and here)

Following longstanding conventions, the budget was unveiled in advance to media under embargo in a lockup that lifted after the markets closed in the afternoon. However, unlike in previous cases, no non-partisan public servants were made available to answer technical questions from journalists. This practice is usually adopted inside budget lockups to help journalists get accurate numbers and background information needed to do their jobs. But in this case, all technical questions were taken by partisan staffers from Ford’s office.

For example, when National Observer asked for a breakdown of cuts to justice services such as legal aid, a Ford staffer said that the ministry would have answers, but then failed to provide those answers.

The budget projects a deficit of $11.7 billion in the 2018–19 fiscal year, which the Ford government said was a $3.3 billion improvement from the deficit of $15 billion inherited from the Wynne government, which was bounced from power in an election last June.

The $163 billion in total spending in the 2019-20 budget was an increase of some $5 billion, although NDP Leader Andrea Horwath said the year-on-year increases in education and healthcare are less than the rate of inflation, equating to a real-world cut.

Here are some highlights:

Indigenous Affairs is losing nearly half of its funding in the Progressive Conservative’s 2019 budget. The ministry is projected to lose $53 million, down from $128 million in 2016-17.

“I don’t know how anybody could look at this budget and think it’s not bad – it’s horrifying,” Horwath said. “It’s a terrible budget.”

The Ministry of Environment, Conservation and Parks is losing the most money, nearly $278 million, which will put its budget at $631 million. Other big cuts are coming to Municipal Affairs and Housing; Government and Consumer Services; and Agriculture, Food and Rural Affairs.

All-in, Ford is slashing more than $2.59 billion from the province’s spending affecting ministries that Horvath says will impact Ontario’s most marginalized communities.

“It’s a terrible budget for the people of Ontario because what it shows is that this government is prepared to slash-and-burn and prepare to not be really clear with Ontarians about what they’re doing,” Horvath said.

The budget outlines the province’s plan to reduce emissions, waste and litter, as well as improve municipal wastewater systems and increase conservation for at-risk species and the Great Lakes, all while cutting the Ministry of Environment’s operating costs by nearly a third.

The Greens' Schreiner said he was surprised by a lack of financial detail relating to transit, given the Ford government had a day earlier announced a major transit plan for Toronto.

“How can you announce a $28.5 billion transit plan with only $11 billion in funding while at the same time you’re kicking sand at your two major funding partners, the City of Toronto and the federal government,” he said. “How does he expect them to come to the table with the other 60 per cent of the funding when he is slamming them on both fronts.”

The Treasury Board Secretariat’s coffers more-than-doubled – a rate higher than any other ministry – increasing by roughly $1.1 billion.

Health and Long-Term Care got the most money, $4.25 billion, but also has the largest budget of any ministry. Horwath says the spending doesn’t amount to much because it doesn’t match inflation rates.

Editor's note: This article was updated at 6:35pm to include comment from Green Leader Mike Schreiner.

When it comes to politicians,

When it comes to politicians, economics and numbers - we have the perfect storm: the confluence of incompetence, magical thinking, and sums plucked from the cloud of unknowing. What's not to trust?