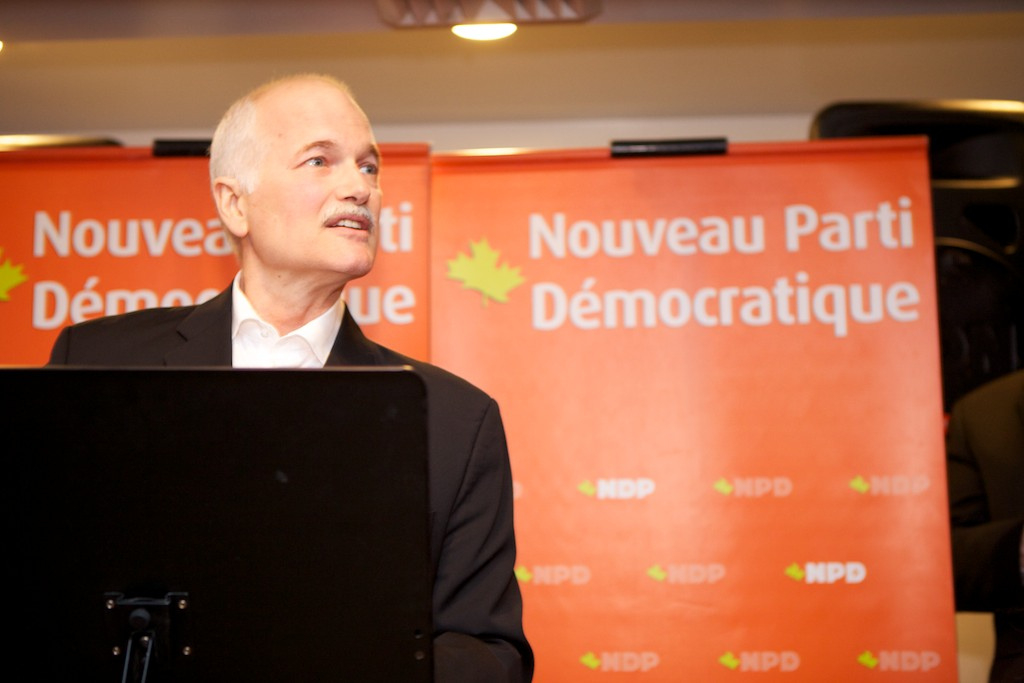 Jack Layton (shown here Jan. 30, 2011) led the NDP to its best results after calling for a moratorium on oilsands expansion and pledging to cut all federal subsidies. Photo from Flickr
Previous story

Earlier this month, Canada’s carbon tax officially came into force. And, if you watched most news outlets, you could be forgiven for thinking that this the grand battle of Canadian climate politics.

The simple truth is that Canada’s carbon tax regime, like much of the Liberal party’s climate policy, is helpful, but it’s also the kind of policy that we needed thirty years ago. Today, Canada needs to do more on climate change. It’s what scientists are telling us, it’s what three quarters of the country said to pollsters last December and it’s why, a few weeks ago, tens of thousands of students across the country skipped class and took to the streets demanding an emergency level response to the climate crisis. The problem, we are told, is a lack of political will, but in truth, it’s about more than that. The problem is our political alignment.

Tackling climate change, and doing it in a way that ensures no community is left behind, is going to require massive government intervention. But, our current political alignment, has engineered our politics to make that almost impossible.

The groundwork was laid when the "Reagan Alignment" — a political alignment explained in Jonathan Smucker’s book “Hegemony How To” as an alliance of right wing social movements, institutions and political forces that took power in the United States in the 1980s — came to Canada. The deregulation and privatization policies of the Mulroney, Chretien and Martin governments all helped to shrink the scale at which our government could take concerted action on climate change. Just think about how much easier it would be to phase out fossil fuel expansion if the government, and thus the people of Canada, still owned Petro Canada.

Then, that alignment evolved and deepened in 2008 when Stephen Harper won power by uniting together factions of the conservative movement, centering fossil fuel interests, and swinging Canadian politics into the dark, carbon-filled hole that we’re still digging ourselves out from.

The shifts in our politics because of the Harper alignment is a big reason that Rachel Notley’s NDP is fully in the tank for big oil billionaires when, less than a decade ago, Jack Layton led the federal party to one its best political showings after calling for a moratorium on tar sands expansion in 2008 and pledging to cut all federal subsidies to the tar sands in 2011. It’s also a big part of why Justin Trudeau went from climate champion and Reconciler-in-chief on the campaign trail in 2015, to buying a pipeline in 2018.

Political alignments are, simply put, broad cross-movement and societal alliances that, when they take and hold political power, direct massive social and economic change. And, they’ve happened on the left too. Between the 1950s and 1970s a broad alignment of agrarian socialists, central Canadian progressives, feminists, Quebec leftists and others came together into a new left political alignment that brought about universal health care and laid the foundation for Canada’s modern social safety net. In the United States, a similar alignment in the 1930s helped to bring about the New Deal. So it’s fitting that the Green New Deal might be our best tool for building a new political alignment to tackle climate change.

If you haven’t heard of it, the Green New Deal is an idea that’s picking up steam around the globe. By linking climate action to social, racial and economic justice policies, any government adopting a Green New Deal would need to direct and mobilize their economy at a scale last seen during the Second World War when, for example, Canada created 28 new crown corporations to meet the crisis of the day.

This kind of approach would invest billions in infrastructure, create tens of thousands of good paying jobs, help to strengthen communities, center real Reconciliation and drive our just transition into a carbon constrained world. It would be a huge undertaking, require massive government action on not just climate but Indigenous rights and title, infrastructure spending, public transit, affordable housing and much more. It would touch millions of people in Canada, and thus could activate millions of people to join a new political alignment. And, right now, the conditions couldn't be more ripe.

According to a recent Abacus Data poll, climate change will be a top ballot box issue for nearly three quarters of people in this October’s federal election, with 83 per cent of the country saying that they are "quite, very, or extremely concerned" about climate change.” That means that millions of people are looking for real climate solutions, at the scale of the problem, something only a Green New Deal can really tackle, which is perhaps why south of the border, the idea is winning over potential 2020 voters in both red and blue districts.

Given the scale of the Green New Deal, and its challenge to fossil fuel interests entrenched in Canada’s current dominant political alignment, it’s a big question whether the leadership of our major political parties would willingly join a new political alignment. That means the political champions in our new alignment are going to need to emerge from the ground up — like they did in the United States with Alexandria Ocasio-Cortez.

Supporting Green New Deal champions in the election this fall might not elect a government that’s all in, but it could swing the balance of power, and move the political window for the kind of climate policies we actually need in Canada — especially if voters deliver a minority government. And, remember that when it came to enacting policies around universal health care, factions of every major party fought the political tide until their positions became untenable by the mid 1960s. Then, as a new alignment took hold, all but the most recalcitrant politicians had to get on board as the wave of change swept across Canada.

That’s, in part, because once a political alignment starts to take hold, it has exponential impacts. Just look at what happened in the United States where the Green New Deal has gone from a fringe idea to something garnering the support of 75 per cent of Democratic presidential hopefuls in a matter of weeks.

Shifting the dominant political alignment in Canada towards a Green New Deal would create the kind of movement and momentum to push local and provincial governments. It would open up the political space and the demand for policies that really take care of workers, communities and families.

This won’t be easy. A new political alignment for real climate action in Canada will require not just movements working together, but politicians coming on board, institutions being pulled in and organizing to bring tens of thousands more people into this fight. But the science is crystal clear — we have to rise to this climate challenge and we have to do it fast. Right now, I think a political alignment for a made-in-Canada Green New Deal might just be out best hope to do that.

Get to know the Green New Deal, by the numbers

Well stated Cameron. I agree that we cannot elect another Liberal or Conservative federal government if we want a Green New Deal or positive climate policies. The Libs and Cons are too entrenched in the fossil fuel narrative. And the NDP in B.C. and Alberta appear to be just as committed to fossil fuel expansion. So that leaves the Green Party as our only alternative. And we only have a few months to build support. How can it be done?

I support the National

I support the National Observer with a subscription and have encouraged friends to subscribe as well. I appreciate the reporting on the challenges of climate change. However, this blatantly political article with the former NDP leader and colours is totally out of place. Ivrrybdisappointed. One more of these and I will not renew my subscription.

Strange reaction to what I

Strange reaction to what I would classify as apolitical, bearing a most sensible solution to our world climate crisis. From a subscriber and staunch supporter of National Observer and its very conscientious and unbiased journalists, writers and contributors.

Most are pleased to see that

Most are pleased to see that our old west medicine man ..."will address issues of importance to Albertans and all Canadians, including ...taking decisive action on climate change while getting our natural resources to market.' Sounds like the 'olde west' medicine man with his $2 bottle of elixir.These Climate issues that are beginning to frighten folks into action,something like when President Roosevelt made momentous decision to build the atom bomb,before Hitler built his bomb...including assigning world's best scientists to do the job.and direct and mobilize their economy at a scale last seen during the Second World War That war was won because of allied joint action., Canada created 28 new crown corporations to meet the crisis ! As the old saying goes ,everyone talks about these issues but no on is doing anything ,but talk. Climate Change is serious issue ...even skeptics like myself have left that flat earth society and ask that leaders lead and offer concrete solutions .Why don't you Mr. Premier -in-waiting ,pick a couple of your new government stars and suggest others do the same and join this National business planning group to "meet the crisis ".

I’m surprised the Green Party of Canada hasn’t yet gone all in on a maple syrup flavored Green New Deal. Voters want an alternative to the carbon tax or nothing options that the mainstream parties offer. Let’s hope the Greens can get their act together soon.