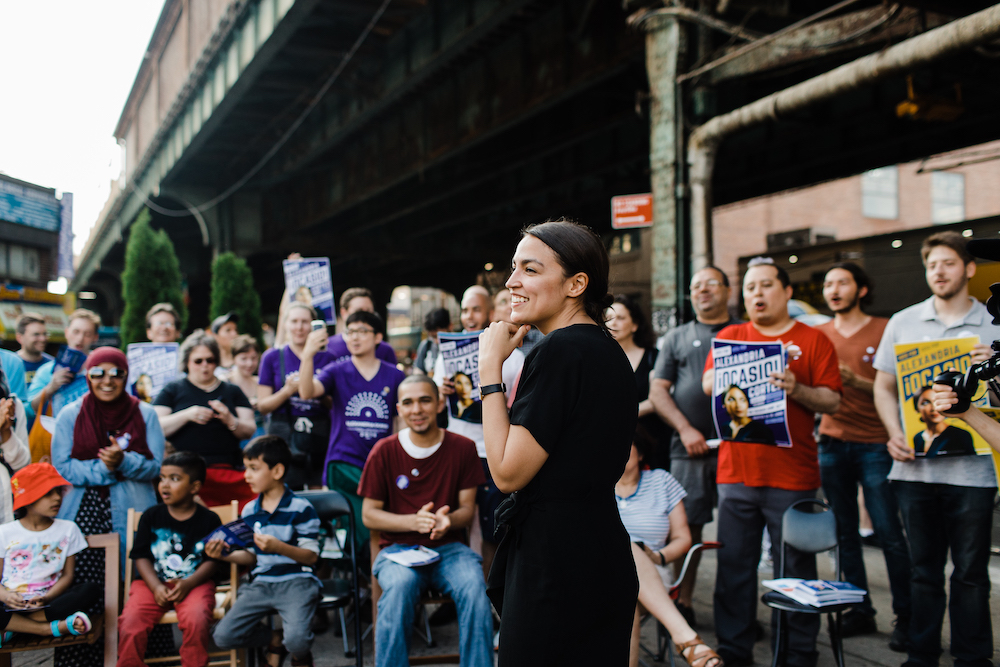 Alexandria Ocasio-Cortez, the US Congresswoman spearheading the Green New Deal, speaks at a community event on May 28, 2018. Photo by Corey Torpie, via handout.
Previous story
Next story

It’s a good result for Singh, and a breath of fresh air for a New Democratic Party that’s been struggling to raise money, floundering in the polls, and has seemed to be teetering on the edge of a very public internal civil war for the past few months. But, as Singh himself mentioned in his victory remarks, now the real campaign begins. If the NDP want to turn their fortunes around by October, their best (and maybe only) hope is to bring the bold vision of a Green New Deal to Canada.

If you haven’t heard of it yet, the Green New Deal is a political idea to tackle climate change with WWII-scale economic and social mobilization. Named for Franklin D. Roosevelt’s New Deal agenda that pulled the United States out of the Great Depression, the Green New Deal has been rapidly picking up steam south of the border. Championed by Alexandria Ocasio-Cortez, and now supported by dozens of congressional representatives and senators (along with every major Democratic presidential hopeful), the Green New Deal has become a clarion call for action at the scale and pace of the climate crisis.

But the Green New Deal isn’t just a good idea. With the campaign and organizing savvy of the Sunrise Movement behind it, polling numbers show wide geographic and cross-partisan support (especially among youth). It’s become a winning platform for Democrats and, if they imported it in the right way, it could do the same for Jagmeet Singh and the NDP.

It’s no secret that, in 2015, Justin Trudeau’s success was due, in large measure, to his ability to outflank the NDP on critical progressive issues — including climate change. It’s also true that his majority victory was driven by a dramatic uptick in youth voter turnout — 57.1 percent of eligible 18-24 year olds voted in 2015 compared to 38.8 per cent in 2011 — that largely showed up for the Liberals.

"If the NDP want to turn their fortunes around by October, their best (and maybe only) hope is to bring the bold vision of a Green New Deal to Canada."

It’s also clear that Canadians, especially young people, want to see more from our federal government when it comes to climate change.

The good thing about a Green New Deal is that it would create jobs and support working families through a federal jobs guarantee program. Although we don’t have direct polling on such a proposal in Canada, a 2016 Iron & Earth poll found that nearly 70 per cent of energy workers support a time-bound transition to 100 per cent renewable energy in Canada. That same poll found that 80-95 per cent would support government programs to support workers through the transition. Among the general public, these numbers are even higher.

It’s also clear that Canadians are looking for more climate ambition from our government. A recent poll from Abacus Data found just over 50 per cent national support for the carbon tax, despite the fact that almost 60 per cent didn’t think it would lead to significant emissions reductions.

That same poll found that nearly 25 per cent of Canadians think that no federal party leader has the best plan to deal with climate change, and that only five per cent think that Jagmeet Singh’s plan measures up.

Compare this to polling around the Leap Manifesto, arguably the best Canadian blueprint for a Green New Deal. According to a 2016 Ekos poll, nearly 50 per cent of Canadians backed the Leap vision of tackling climate, social and economic justice. And those numbers are even higher among NDP and Liberal party faithful.

All of this adds up to a clear challenge to the NDP to put out a climate plan that acknowledges, as Vox writer David Roberts put it last week, “this is a fucking emergency.” A plan that actually prescribes the kind of massive economic and social mobilization necessary to rise to the challenge.

The good news is that some people within the party already seem to be getting the message. Citing last fall’s Intergovernmental Panel on Climate Change report — the one that warns us all that we have just over a decade to get our act together when it comes to climate change — Svend Robinson returned to politics to run against notable Trudeau pipeline apologist Terry Beech in the riding of Burnaby-North Seymour. The second tweet from his campaign account was about a Green New Deal for Canada.

Grassroots activists within the NDP are trying to make sure that Robinson is not alone. Across the country, nomination races are being challenged by young women with bold, ambitious, Green New Deal-esque platforms. In Alberta, Paige Gorsak came within a handful of votes of winning the nomination for Linda Duncan’s former seat. In Ottawa-Center, Graciela Hernandez-Cruz did the same. They may have lost their races, but not by much, and they’ve helped to inspire other candidates like Leah Gazan in Winnipeg-Center and Emma Norton in Dartmouth-Cole Harbour — to put their names forward to bring a bolder, climate and social justice vision to the NDP.

With only eight months until the next federal election, it’s going to take a small miracle for the NDP to right their ship. But, if they want a shot at clawing their way back to federal relevance, they need to call a big shot, and a Green New Deal for Canada is their best chance to do that.

By Emily Holden | News, Energy, Politics | February 14th 2019
Reports from the Race to a Safer World

By Clayton Thomas-Müller  | Opinion, Energy | November 29th 2018
Reports from the Race to a Safer World

NDP = GND or LNG? That's one of the crucial choices Mr Singh has to make.

Arguably the first prominent politician to campaign on the ideas associated with a Green New Deal was Jack Layton. Despite lionizing the man, the NDP has largely let those ideas lapse since.

Like I keep saying: the Courage Coalition has produced "The Green New Deal of the North"!!! EVERYONE PLEASE READ IT AND SIGN ON!!! (just google courage coalition and you'll find it!)
Thanks!

Wasn't that easy to find,

Wasn't that easy to find, actually. First of all, there's a US Courage Coalition that appears to be completely unrelated. Second, when I found the correct one, there was nothing about "green new deal" on its main page. I had to search the site to find it at: http://www.couragecoalition.ca/a-green-new-deal-of-the-north/

Then at the end, where they ask you to sign on, the form has four fields with no labels. How am I supposed to know what to put in which field?? So then I went looking for contact information to tell them about the problem, and I couldn't find any.

What a mess! This organization has a lot of work to do before they can be useful, credible contributors to the struggle. Better to sign up with The Leap (leap.org). They seem to have a better idea of what they're doing.

Vivian -and all,
It's too bad you had such a tough time with this!
First, at the bottom of the GND of the North, the fields where you sign are ghosted, but they're there
Second, for contact info, at the bottom of a couple of the pages there are links to facebook, twitter and email, so you can send a message by email
Believe me, I am a senior so I can definitely attest to all the poking around one has to do sometimes to get what one wants...!!
And all I want is for everyone to get together on this, stop reinventing this wheel, get political, and get some REAL ACTION going!!

I wrote to Jagmeet Singh

I wrote to Jagmeet Singh yesterday suggesting that the NDP and the Green Party form a coalition. Wouldn't that provide an exciting new vision for us to embrace! They need each other! Neither have the clout alone!

I'm with Deanne. Too many

I'm with Deanne. Too many partisan politicians, with too many different versions of the same theme, allowed Doug Ford to take over the Ontario government -- against the will of 60% of voters. This is not democracy!

The Green Party now advocates for a Guaranteed Livable Income and the NDP advocates for action on Climate Change; so why not work together? In each riding/constituancy, let's meet together and vote on the best candidate from both parties -- the other agreeing to withdraw from the race, for this election only. We must have enough voting strength to prevail over the reactionary conservatives/people's party -- to save our democracy and save our planet.

Reference: Elizabeth May's 2019 "Vision Green" in which you can find the following 2 bullet points (out of 6):
- Work hard, placing the interests of our constituents and of Canada above those of our party; and
- Strive to find common ground with other parties, working across party lines in the public interest.
PJN.