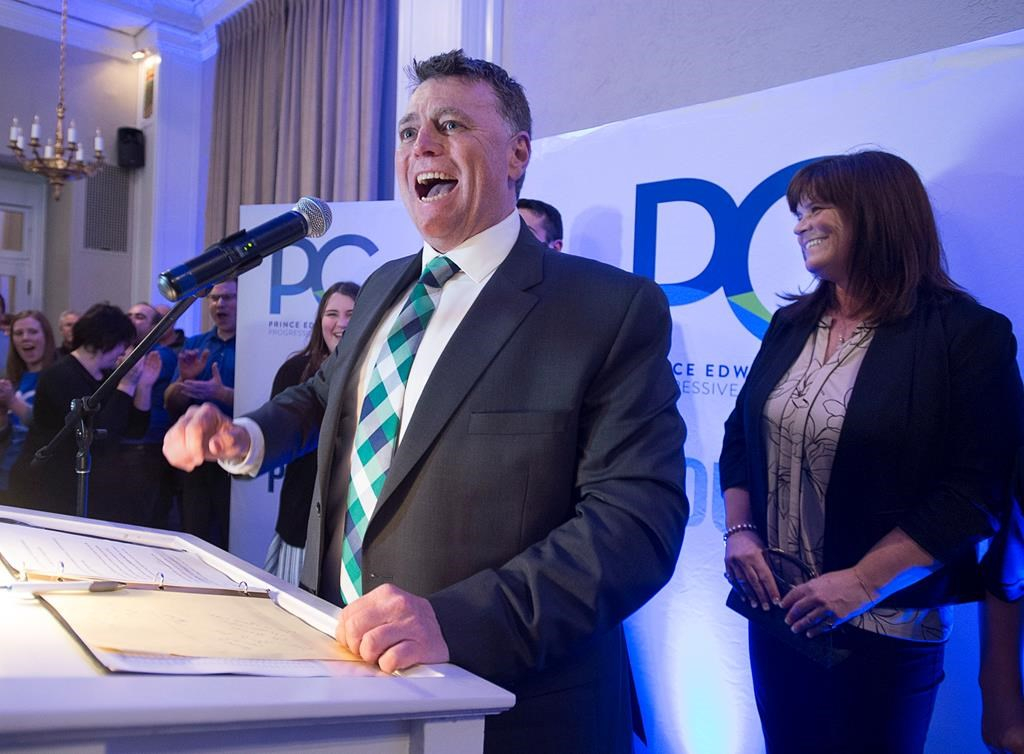 The leader of the Prince Edward Island party poised to form the Island's next government isn't sounding much like his tough-talking counterparts in Alberta and Ontario, preferring the gentle "Island way" over the politics of confrontation.

Dennis King's Progressive Conservatives won the most seats in the provincial election Tuesday, and he's aiming to form a minority government after a campaign where one leader's debate was referred to as a "nice-off."

The 47-year-old former journalist and public relations entrepreneur says a co-operative approach is precisely the one he intends to carry on with his Green Party and Liberal opposition, as he sets outs to run the province without a formal coalition.

King pointedly states he doesn't plan to join "the resistance" of Conservative premiers, including Ontario Premier Doug Ford and Alberta Premier Jason Kenney, in lining up to be a collective foil to Prime Minister Justin Trudeau's federal Liberals.

"I don't see myself as any kind of resistance anywhere," King said Wednesday.

"Prince Edward Island is a lot different than politics in Ontario. The tone and tenor of the election here was pretty much a stark contrast to what you see in those other two provinces."

The 27-day race was characterized by a refined and genteel tone.

The leaders of all four registered parties in P.E.I. rarely disagreed on policy and refrained from personal or partisan attacks.

It worked well for King, whose party had struggled with internal squabbles, a revolving door of leaders and dismal polling numbers for more than a decade.

Now, he faces the task of officially forming government, and then holding onto power.

The Tories won 12 of P.E.I.'s 27 seats in the provincial election Tuesday — the first minority outcome in a P.E.I. election since 1890.

The Greens won eight seats and will become the first Green party to sit as the Official Opposition in Canada. The incumbent Liberals won just six seats after enjoying majority status for the last 12 years. One seat remains unfilled, with a byelection planned.

However, King says he's not necessarily aligning himself too closely with his federal counterpart.

While the P.E.I. party does have members who belong to both the federal and provincial branches, those branches are very separate, King said.

"I think it's safe to say we solidly subscribe to a more Progressive Conservative model here - socially progressive, fiscally conservative - and maybe at the federal level and in some other provinces, it's probably harsher than that, perhaps you might say."

He says doesn't fully support the carbon tax, but he's not going to join other Conservative premiers in fighting it.

Green Leader Peter Bevan-Baker told reporters Wednesday he has not yet had conversations with his new caucus nor with the other parties about potential co-operation or coalition partnerships.

But he's not ruling anything out.

"We've had no formal discussions about where we go from here, but as far as I'm concerned, all options are open," he said.

He echoed King's hopes to work collegially, both in the legislature and with the federal government.

"There are so many things that are undetermined at this point, but I come at this with an absolute sense of goodwill and optimism that the collegiality that was displayed during the election campaign will continue on in how this next parliament functions," Bevan-Baker said.

The kind words may be partly the result of the reality there's rarely more than two degrees of separation among residents of P.E.I.

For example: King and his family were once patients of Bevan-Baker's former dental practice.

When they encountered one another for the first time after the vote in a CBC studio on Wednesday they didn't merely shake hands.

They shared a warm hug.

P.E.I. Greens make history as Tories come out on top