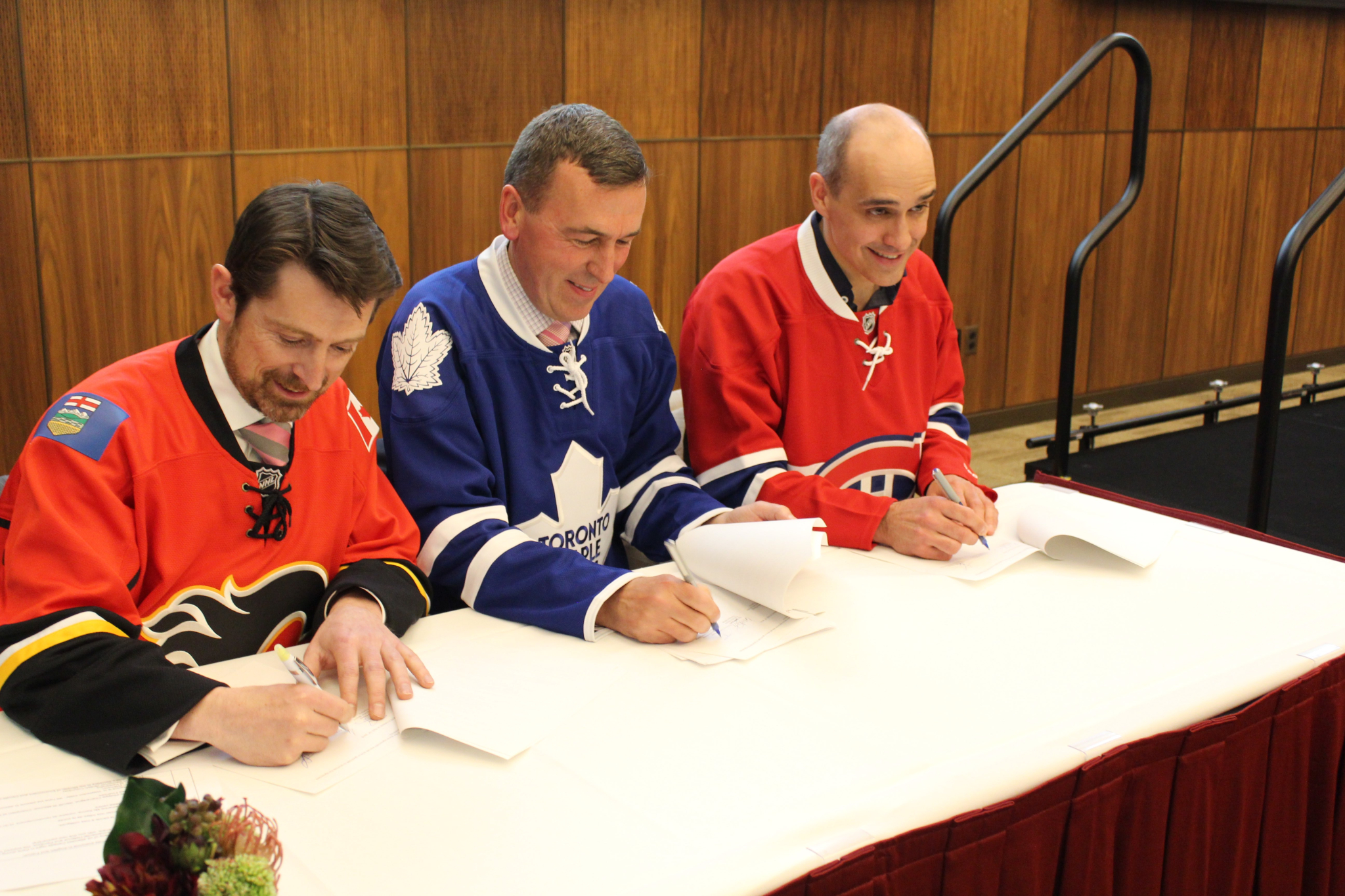 Ed Whittingham, a clean energy business consultant in Alberta, has resigned from the board of the provincial oilpatch regulator, citing concerns over the policies of the incoming United Conservative Party government, to be led by premier-designate Jason Kenney.

"I cannot support the government's tactics and policy direction, and they were going to fire me anyway, so let's call it a case of irreconcilable differences and save everyone some time and money," he told National Observer in a phone interview on Monday. "I jumped instead of being pushed."

Kenney's government is due to be sworn in to office on April 30 after winning a majority of seats and defeating Premier Rachel Notley's New Democrats in Alberta's April 16 election.

The premier-designate had said he would fire Whittingham, whom he accused, without evidence, of being part of a conspiracy of "economic sabotage" against Alberta's oil and gas industry.

Whittingham was previously the executive director of the Calgary-based Pembina Institute, an environmental and energy policy research organization that is mainly funded by Canadian governments and oilpatch companies. The outgoing Notley government appointed him to the board of the Alberta Energy Regulator (AER) on Feb. 12.

In his resignation letter (PDF), dated April 28 and addressed to the chair of the AER, Sheila O'Brien, Whittingham said that Kenney was targeting him as part of a "smear campaign."

Whittingham's letter also noted that he had done substantial collaborative work with the oil and gas industry, including as an adviser to Royal Dutch Shell and the World Economic Forum.

"My views on responsible energy development are well documented in many op-eds and blogs readily available online, and are entirely consistent with safe, environmentally responsible development of oil and gas resources," he wrote.

"I have maintained constructive and respectful relationships with Alberta’s industry leaders and devoted my career to advancing solutions to the energy challenges we face. In spite of this, following my appointment to the AER board I was subjected to a smear campaign without precedent in Alberta for a public appointment held by a private citizen. Much effort was made to defame my character."

The letter said that the resignation was to take effect immediately. Meantime, Whittingham said he plans to continue his work developing clean energy policy and projects.

"I realize that this resignation is symbolic, given the new government’s well publicized campaign to misrepresent my record and fire me from the AER’s board for being a 'cat among the pigeons.' (Ironically, as someone from the NGO sector who has spent countless hours working with oil and gas leaders, the joke was that I was a 'pigeon among the cats!') Still, I feel it important, as I cannot support the new government’s tactics and policy direction," Whittingham continued in his letter to O'Brien.

"I think the intention to also replace you and our other board colleagues is especially unfortunate. It was an honour and a privilege to sit among such an esteemed and pre-eminently qualified group of people. You bring immense intelligence and insight to a role that is critical to the prosperity and well-being of all Albertans. I sincerely hope that the new government reverses this decision. Overall I am deeply concerned that there does not appear to be room for those with our shared expertise and public interest backgrounds on the AER board."

The regulator itself has been the source of controversy in recent months, following investigations by National Observer, Global News, the Toronto Star and Star Calgary.

One investigation uncovered internal documents showing that the regulator had privately estimated the province's oilpatch was sitting on financial liabilities as high as $260 billion, nearly $200 billion more than what it had publicly stated. A separate investigation quoted insiders at the regulator who cited an incident involving a toxic plume from the oilsands that struck a First Nations community in 2016. The insiders alleged that pressure and lobbying from industry and economic interests were trumping science and strong oversight, putting public health and safety at risk.

Whittingham's resignation was first reported by the Globe and Mail.

He had helped develop a 100-megatonne per year cap on oilsands emissions as part of the previous NDP government's efforts to deal with climate change, which had been backed by some of the province's largest energy companies. In his letter, he expressed concerns over what he described as Kenney's "intention" to scrap this cap, which he said would put Alberta's international reputation at risk.

When asked to comment, Kenney's spokeswoman Christine Myatt said that the incoming government was "pleased" that Whittingham had resigned, noting that the UCP platform didn't mention the cap on oilsands emissions. She also repeated some of Kenney's unproven allegations, without providing any new evidence.

"We reject the assertion that telling Albertans the truth about these facts amounts to a smear," Myatt said.

"Premier-designate Jason Kenney has been clear that our incoming administration is going to be relentlessly focused on a strong, assertive and strategic defence of our economy, our workers and our way of life. Getting pipelines built, fighting back against foreign funded special interests, and standing up for a fair deal in Canada are key priorities of our team. Mr. Whittingham's assertions on our emissions cap commitments are false, and we are pleased he has resigned."

Kenney later took to Twitter to celebrate the news himself.

"It was gracious of Ed Whittingham to resign a day before we could fire him," Kenney wrote on Twitter. "Our government will never appoint people like him who are avowed opponents of Alberta jobs. And we will stop all funding to groups engaged in economic sabotage against Alberta."

Pembina Institute never intervened to oppose pipeline during his tenure

Whittingham said the Notley government had named him to the AER’s board after an open competition citing his “long history of expertise on innovation and environmental performance in the oil and gas sector” and ability “to offer thoughtful guidance in board governance related to government priorities of regulatory efficiency, liability management, reducing methane emissions at the lowest possible cost to industry, and delivery of effective climate policy that drives innovation and technology, protects our trade-exposed industries and reduces emissions.”

In his victory speech earlier this month, Kenney said he would start a 'political war' on environmental groups that oppose rampant oilsands development and which he claims are funded from abroad. Alberta sits on the bulk of the world's third largest reserves of crude oil, following Saudi Arabia and Venezuela.

The former Harper government minister, who has defended his stance questioning the degree to which humans are causing climate change, wants to bolster the province’s crude oil exports at a time when experts say a global transition to renewable forms of energy will make costly fossil fuels less attractive to investors.

In his letter, Whittingham also said that members of the incoming provincial government sought to misrepresent his work at the Pembina Institute, where he was executive director from 2011 until 2017.

"Pembina’s perspective is that oil and gas development, including in the oilsands, should be governed by a world-class environmental management and monitoring system and credible greenhouse gas management framework," he wrote. "Under my long tenure at the organization, Pembina never intervened in any regulatory process to oppose any pipeline."

He added that during his time at Pembina about 85 per cent of its revenue came from Canadian sources; governments, companies, foundations and individuals, with the remainder coming from international sources that share its clean energy goals. He said this was a similar situation to that of hundreds of other Canadian nonprofit groups and companies interested in public policy.

The Pembina Institute has also offered advice and collaborated with major oil companies such as Suncor, Shell, Nexen, Statoil, ConocoPhillips, CNRL and Devon, Whittingham told the Financial Post in an interview published in March 2012.

"Canada has an important role to play in a global strategy for responsible energy development, and, with our wealth and expertise, a responsibility to be a leader in the world," he wrote in his resignation letter. "To use “foreign-funded” as a slur takes our open, pluralist society in the wrong direction."

There is no "environmentally

There is no "environmentally responsible development" of AB oilsands. It's an oxymoron. No scientific basis for this greenwashing. Ed Whittingham and the Pembina Institute are flogging a dead caribou.

Whittingham is not a "cat among the pigeons". More like a sheep in wolf's clothing.

Pembina's biggest funders are oil & gas companies, and the Big Banks that back them.

"The outgoing Notley government appointed him to the board of the Alberta Energy Regulator (AER) on Feb. 12."

Don't forget that "the outgoing Notley government" embraced Vivian Krause's conspiracy theory. The basis of Kenney's "smear campaign" against ENGOs that now forces Ed Whittingham to resign from the AER.
Notley appointed Whittingham and, however unwittingly, helped unseat him.

Krause: "I have been working since July 2018 with Notley’s govt to provide information and assist her team in taking the necessary steps to break the pipeline gridlock."
• https://business.financialpost.com/opinion/vivian-krause-rachel-notley-t...

"'I’m frustrated by it, of course,' Notley says of the [anti-oilsands] campaign. 'Vivian Krause (the B.C. researcher) and people like her have done a good job of really laying bare the details of this and really showing us the degree to which this had been going on and building over time.'"
"David Staples: Alberta needs Notley's wisdom and Kenney's fight to win oilsands campaign" (Edmonton Journal, 12-Apr-19)
• edmontonjournal.com/news/local-news/david-staples-alberta-needs-notleys-wisdom-and-kenneys-fight-to-win-oilsands-campaign

Stopping the move away from

Stopping the move away from coal is bad policy. Coal is dirty, not simply a carbon emitter. There is no such thing as clean coal, just coal that is really dirty instead of extremely dirty. Kenney also appears to be leading Alberta down a path that will leave it less prepared to economically succeed in the future as the single minded focus on oil fights will leave it less diversified down the road. Let's hope his promises were, at least in part, lies to get elected.