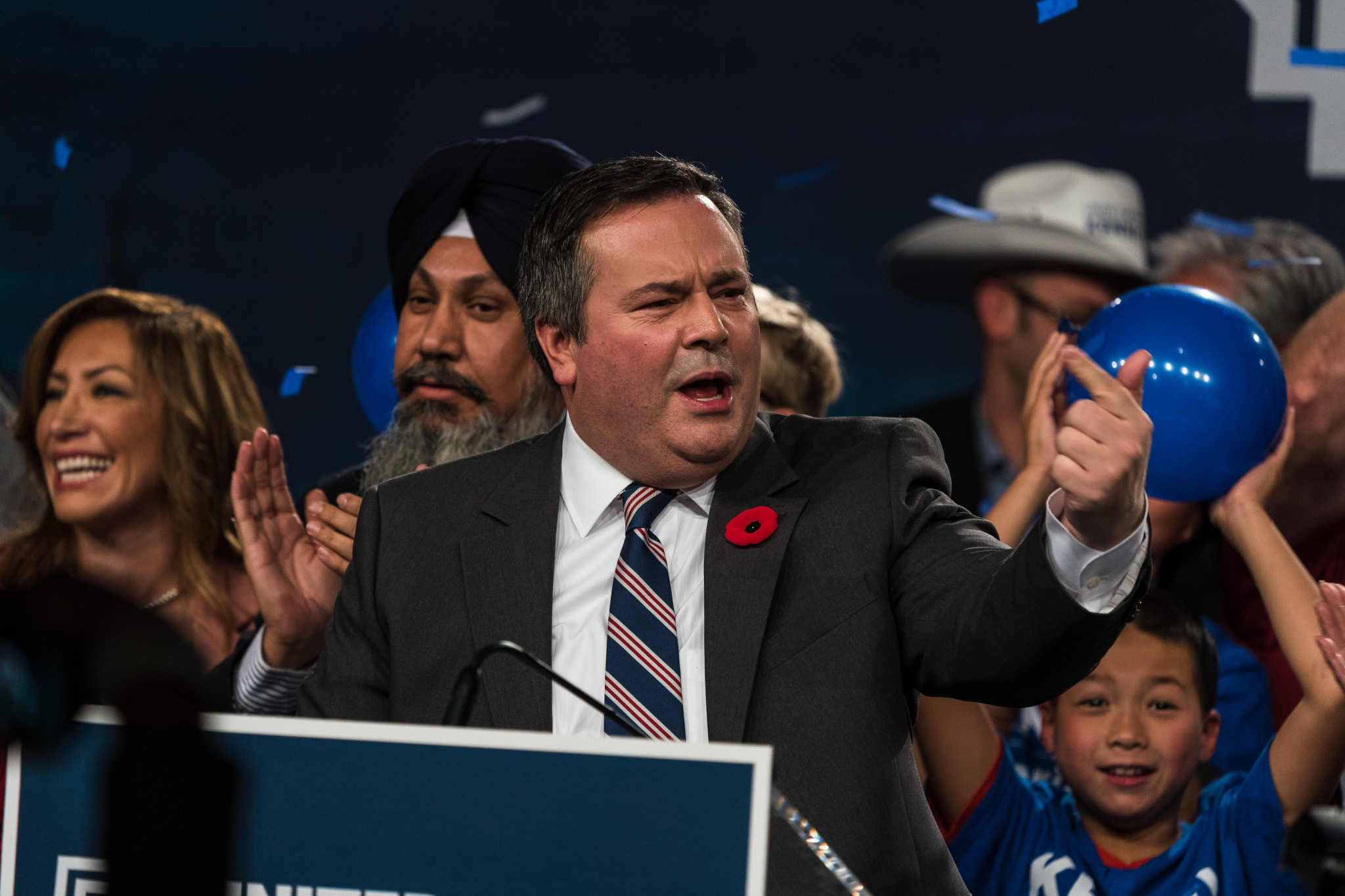 Prominent Canadian environmental leaders say they hope to focus on priorities such as fighting climate change as they brace for the impact of government-led attacks and investigations promised on Tuesday night by the incoming premier of oil-rich Alberta.

The comments came in response to a blistering victory speech delivered by Alberta United Conservative Party Leader Jason Kenney as he reacted to a resounding victory that will soon give him a majority government in the provincial legislature of the Western Canadian province.

Kenney's party had captured more than 50 per cent of the vote and about two-thirds of the seats by the time he took the stage to deliver his warning to the opponents of one of Canada's most powerful industries.

A crowd of supporters in Calgary roared with approval as Kenney pledged to start a political war with those opponents who have also been among his own adversaries. He said his government would launch investigations of environmentalists, complaining that they were spreading lies about the impacts of industrial development in a province that sits on the bulk of the world's third largest reserves of crude oil, following Saudi Arabia and Venezuela.

The former Harper government minister, who has defended his stance questioning the degree to which humans are causing climate change, wants to bolster the province’s crude oil exports at a time when experts say a global transition to renewable forms of energy will make costly fossil fuels less attractive to investors.

He made no mention of internal estimates from the provincial oilpatch regulator which has estimated clean up costs for oil, gas and pipeline facilities in the province could add up to $260 billion in financial liabilities. He also neglected to mention new federal government statistics estimating that the pollution from Alberta's oilsands in 2017 was higher than all of the greenhouse gas emissions produced that year in Quebec or British Columbia.

Instead, Kenney called out Vancouver-based non-profits Leadnow and the David Suzuki Foundation, accusing them and other groups of a “campaign of defamation and double standards.” He said this campaign is only focusing on Alberta oil, without going after oil from other jurisdictions that have poor democratic and human rights standards.

“To the Rockefeller Brothers Fund, the Tides Foundation, Leadnow, the David Suzuki Foundation and all of the others: Your days of pushing around Albertans with impunity just ended,” Kenney said. “Today we begin to fight back.” He vowed to “launch a public inquiry into the foreign source of funds behind the campaign to landlock Alberta energy,” which had become a UCP campaign platform pledge.

'An attack on hundreds of thousands of Canadians'

The unwanted attention from right-wing politicians is old news for groups like the David Suzuki Foundation and Leadnow. Leaders from these groups said Kenney was attacking democracy by singling out legitimate advocacy organizations that push for positive social change, and that hundreds of thousands of Canadians support.

Leadnow became the subject in 2015 of several complaints to the Canada elections commissioner’s office that accused it of using foreign funds for advertising. Canada's election watchdog cleared the organization of improper spending after finding no evidence.

"Non-profits and charities have a long and trusted history of working toward positive, meaningful social change in Canada and around the world. By attempting to revoke our statuses as charities, Mr. Kenney is attacking a fundamental pillar of the modern democracy we in Canada value so much,” David Suzuki Foundation CEO Stephen Cornish told National Observer.

Cornish said the David Suzuki Foundation passed the Harper-era audit “without any issues” and that the CRA was satisfied it was fulfilling its charitable status role. The organization was remaining focused on its mission, he said, "to help find solutions to today’s climate emergency."

"This also includes helping accelerate our transition to a clean energy future through the adoption of renewable energy sources like wind and solar, as well as climate solutions like electric cars, active transportation like biking and walking, smarter city design and faster, better public transit."

'In 2019, every government needs a climate plan'

The federal government’s latest climate change report to the United Nations shows that pollution from fossil fuels in Canada continues to grow. Alberta's carbon pollution increased by 18 per cent from 2005 to 2017, "primarily as a result of the expansion of oil and gas operations," the report stated.

A major scientific report released this month said Canada and the rest of the world must reduce carbon emissions to "near zero" by roughly mid-century to avoid more extreme warming from climate change. It said this will increase the risk of floods, wildfires, loss of freshwater and other issues.

On Tuesday, Kenney said “we take seriously the challenge of climate change” and “we are world leaders in innovating to reduce emissions and shrink the environmental footprint of Canadian energy.”

He also thanked “the growing number of progressive Indigenous leaders across Canada who want to be partners in responsible resource development.”

“Alberta’s government will sit down with you in the spirit of the treaties, and of reconciliation, to develop real partnerships that can help move First Nations people from poverty to prosperity through resources,” he said.

“The time has come to move beyond symbolic gestures to real, practical measures for Indigenous peoples to benefit from the resources that lie beneath the lands that they first inhabited.”

But he has also been campaigning hard against a “carbon tax,” calling it a “cash grab” that offers “no environmental gain,” despite evidence that without British Columbia’s carbon tax, implemented in 2008, emissions would be five to 15 per cent higher.

“In 2019, every government needs a climate plan. We haven’t heard much about the Mr. Kenney’s, so we look forward to that,” said Cornish.

“The time and money he proposes spending to investigate charities would be better spent helping tackle the biggest problem facing our planet right now: climate change."

The UCP platform promises to "launch a public inquiry under the Inquiries Act into the foreign sources of funds behind the anti-Alberta energy campaign. The inquiry will have the power to compel witness testimony, and have a $2.5 million budget."

The party did not respond to a request for comment about when Kenney expected to launch this inquiry, and whether it would compel testimony from the four groups he mentioned in his speech Tuesday.

Asked for comment, Prime Minister Justin Trudeau's office referred to his statement congratulating Kenney on his victory. “Together, we will address issues of importance to Albertans and all Canadians, including supporting canola producers, and taking decisive action on climate change while getting our natural resources to market," he said.

'Not worth the drop in the bucket'

Foreign money is no stranger to the oilpatch: foreign oil companies have historically been quite present in the industry. In fact, many analysts were concerned about an “exodus” of foreign capital from the sector following trade and pipeline uncertainty.

But while Leadnow has been criticized for accepting $63,000 in funds from American foundations in 2016-17, that money “reflects 0.25 per cent of our revenue for those years,” said Theroux, and the organization hasn’t touched U.S. money since.

“We just don’t have any problem raising money from Canadians who are trying to fight for a better world,” she said. “We’ve historically been very little funded by American sources, other than the very beginning.”

Plus, the amount of time and resources Leadnow spent on the Commissioner of Canada Elections investigation made it “not worth the drop in the bucket that the American money was for us,” she said. "It just didn’t make sense to be continually fighting this battle when really we didn’t need the money.”

Similarly, Tides Canada president and CEO Joanna Kerr told National Observer that "less than one per cent" of the group’s funding has gone towards pipeline or oilsands related activities.

“Mr. Kenney’s blame is actually misdirected. The business community is rapidly moving on to clean energy. Citizens across Canada want urgent solutions for climate change. There is no better time to create green jobs now and protect our land, water and air for future generations," she said.

Earlier this week, the Rockefeller Brothers Fund told the Star Calgary that it supports climate change mitigation efforts around the world and has divested from fossil fuel investments.

“This body of work stems from the fund’s long-standing commitment to the environment and conservation over more than 75 years,” the fund told the newspaper. “The Rockefeller Brothers Fund does not, in accordance with the law, engage in or support political activity in any country.”

While your at it Kenney, will

While your at it Kenney, will you be looking into the Koch Brothers and other Americans' funding of the ultra-conservative Fraser Institute and the Canadian Taxpayers Federation regarding their charitable status? Well at least those foreign Big Oil companies are bailing out of your tar sands, so you won't have to worry about their undue influence over and exploitation of Canada any more.

Nothing is bigger than big

Nothing is bigger than big environmental. It has hundreds of billions of dollars behind it. Every western government (except the US) is destroying their economies while at the same time subsidising and passing laws to hasten its demise.

Absurd.
Compared to the virtually bottomless resources of govt, huge multi-national corporations, and the media, the resources of Canadian ENGOs are a drop in the ocean.

Los Angeles-based Capital Group Cos. with $1.7 trillion in assets is the largest shareholder of Suncor, Enbridge, CNRL, and Keyera. (2018)
• https://business.financialpost.com/commodities/energy/a-1-7-trillion-fun...

Charles Koch: chairman of the board and CEO of the conglomerate Koch Industries. Largest landowner in the oilsands. Major funder of climate denial. Contributor to the Fraser Institute.

"The Fraser Institute is known for sharp critiques of clean energy policies. Since 2008, the research organization has received more than $500,000 in funding from the billionaire American Koch brothers, whose affiliates have poured more than US$88 million into groups that have seeded doubt on climate change science since the late nineties."
"Experts say Fraser Institute report on coal and clean air is "scientifically flawed" (National Observer, Feb 22nd 2017)
• www.nationalobserver.com/2017/02/22/news/experts-say-fraser-institute-re...

Who are the Pembina Institute's biggest funders?
A) Oil & gas companies, and the Big Banks that back them.

Thank you for taking the

Thank you for taking the trouble to record this data......the idiotic things that Kenny fans actually believe is more than incredible. It reminds us that most fake news begins in the mind of those who want to believe it....and the desire to blame environmentalists and heart oil continues strong in Alberta.

Seriously? What are you

Seriously? What are you talking about and do you have any stats or sources (other than perhaps Rebel Media or some such alt right lover of all things Kenny) to back up what you're asserting???

Suspect you know damn well Big Oil and Gas...CAPP....and all the other pro-fossil fuel shrink tanks out there have a great deal more money than any Environmental organization.
But if wild eyed conspiracy theorists don't get a grip, a good many fair minded citizens of this country may decide to donate more generously than they have in the past, and somewhat even the odds.

I hope you're joking. It's

I hope you're joking. It's not funny though.

October 9, 2018
Congratulations are deserved all-around to the various parties responsible for this week’s announcement that LNG Canada is proceeding with its long-awaited liquefied natural gas export terminal in Kitimat. As Prime Minister Justin Trudeau remarked — several times, with a big grin — at $40 billion, the project is the largest private investment in Canadian history.

I have donated before and I

I have donated before and I'll send some more money to leadnow and Suzuki immediately. Does the 40 year old virgin want to investigate me ( caution Jason I'm a Canadian )?