Rising waters add urgency to disaster planning: 'Been through so much' 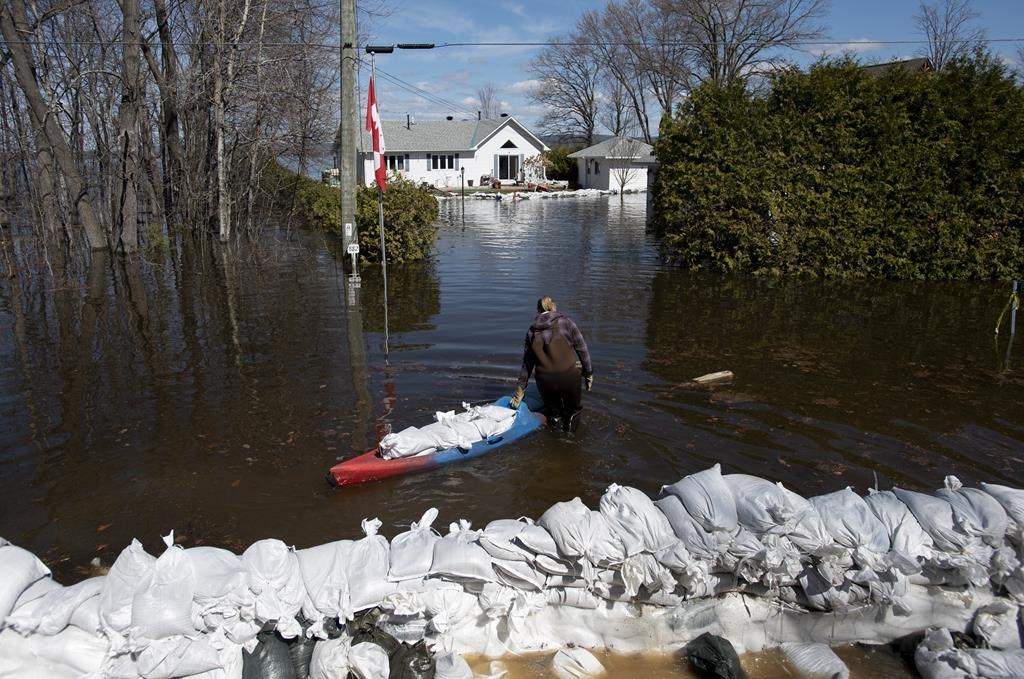 A resident uses a boat to float sandbags to protect her home from flooding on Bayview Drive in the Ottawa community of Constance Bay, on Tuesday, April 30, 2019. File photo by The Canadian Press/Justin Tang
Previous story
Next story

Flood waters were still rising around Ottawa Wednesday, even as officials talked of planning for a future of similar disasters — and Canada's need to prevent, prepare and adapt.

"Either you invest in adaptation — otherwise you'll have to spend on remediation year after year," federal Infrastructure Minister Francois-Philippe Champagne told reporters.

He said he wanted to sit down with his provincial counterparts about where and how to build after a flood, and the role of federal funding, including how to get some of it into cities that want to invest in disaster adaptation.

The federal government is planning to spend $2 billion over the next decade on projects that will help mitigate or prevent damages from disasters like flooding.

"I think it's just the right thing and the smart thing to do," Champagne said. "So what I'm saying is that let's get together, let's work together."

In Quebec City, Premier Francois Legault announced the creation of a group to co-ordinate the government's flood response and prevent future disasters.

In addition to ensuring municipalities and homeowners are compensated quickly, Legault said the group would review what's considered a flood zone and "ensure good decisions are made, whether it's for infrastructure building or moving certain residences."

Legault said he hopes the group will have a plan in place in the coming months, in order to carry out as much work as possible before the 2020 flood season.

New Brunswick Premier Blaine Higgs was also focused on the future after a meeting in Ottawa to discuss financial relief for homeowners affected by this year's spring flood.

Higgs met with federal Finance Minister Bill Morneau Wednesday morning and said the minister was receptive to his thoughts on flood relief and planning for the future.

Higgs said an emphasis must be put on mitigation, including restrictions on building on flood plains, and raising some highways and roads that were flooded over.

"It's a new day, and two years in a row is telling us we can't just do the same thing," he said.

In Ottawa, 155 households at risk from rising water voluntarily evacuated on Wednesday as the bloated Ottawa River neared its predicted peak.

And with 15 and 35 millimetres of rain in the forecast for the National Capital Region, others in the city were holding their breath and praying they would not be next.

Those included residents of Britannia Village, a neighbourhood west of downtown Ottawa, where the military and volunteers had reinforced a berm built only three years ago to keep the water away.

That berm saved the neighbourhood when the Ottawa River flooded in 2017, but Britannia Village Community Association president Jonathan Morris said the water this year is already half a metre higher.

With uncertainty about when the flooding would peak, Morris said residents were now in a waiting game to see how the weather turns.

"We're in a situation here where we're not going to lose one house; we'll save all the houses or we'll lose all 120," he said as a combination of cold rain and ice pellets fell from the sky.

With sandbags ringing his house, former NHL player Luke Richardson, who now works as an assistant coach for the Montreal Canadiens, echoed that there was little else to do but hope the water starts to recede.

In the meantime, he said, "You're not sleeping well at night, just hoping the sump pumps are going and every little sound you hear, you're wondering if something is going on outside."

Karen McCrimmon, the MP for the hard-hit Constance Bay area west of Ottawa, told reporters outside the weekly Liberal caucus meeting that homes will be lost to the flood, but just how many is uncertain. Also uncertain, she said, is the breadth of insurance coverage to help with rebuilding.

But as Ottawa braced for more flooding, other parts of the country received some good news.

In Quebec, while the number of evacuees rose slightly overnight, water levels appeared to be dropping in the majority of flood-affected areas.

And while rain in the forecast had raised fears of flooding along the Richelieu River, a meteorologist from Environment Canada said the downpour was unlikely to cause anything more than minor flooding in the areas near Lake Champlain.

In New Brunswick, a section of the Trans-Canada Highway that had been closed by flooding since last Wednesday was reopened to traffic, with one lane available in each direction.

Also, the federal government added Ontario's Muskoka region to a list of flood areas in Ontario, Quebec and New Brunswick that are off limits to boats and drones, other than those operated by emergency personnel or homeowners with no other means of reaching their properties.