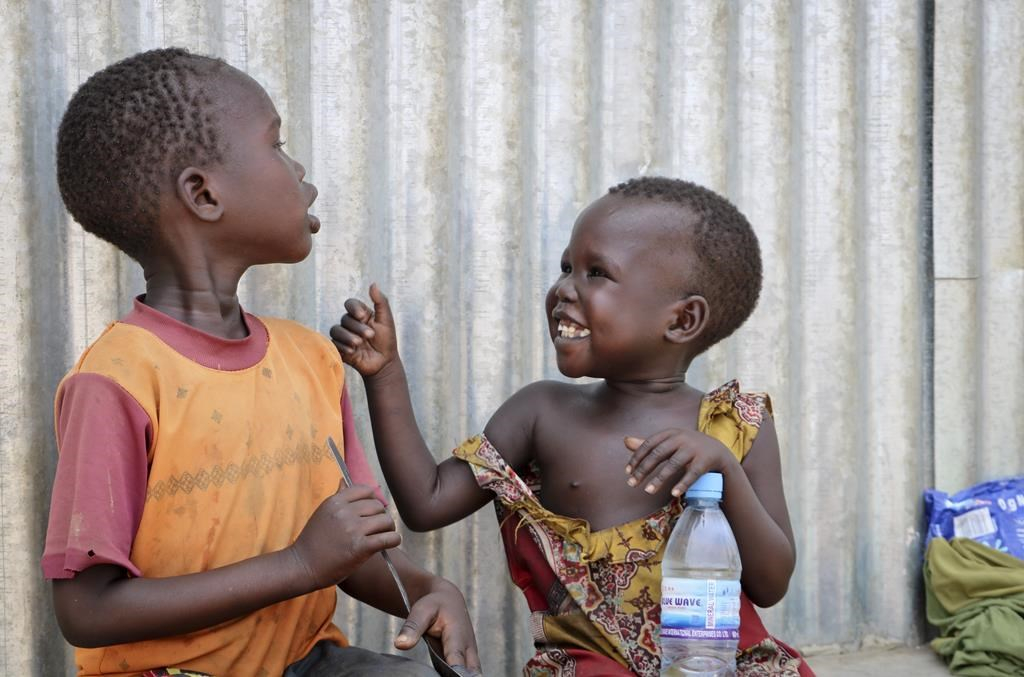 In this photo taken on Tuesday, April 2, 2019, children play outside a community center at an internally displaced person's camp in the capital Juba, South Sudan. Photo by The Canadian Press/AP Photo/Sam Mednick
Previous story

Canada could find a win for its feminist foreign policy in the spiralling famine and refugee crisis gripping South Sudan and neighbouring African countries, says a senior United Nations official.

"Canada can do more," Arnauld Akodjenou, the UN High Commissioner's for Refugees' South Sudan co-ordinator, said in an interview Monday. "It's a test case they have with the South Sudan situation. They should not miss that opportunity."

Akodjenou was in Ottawa to press the Trudeau government for more Canadian involvement in South Sudan's five-year civil war, which has killed 400,000 and forced 2.2 million people to flee the country, while displacing 1.9 million more inside the country.

Of the refugees, 80 per cent are women and children, he said, which makes South Sudan a perfect policy fit for the newly branded Canadian policy of focusing foreign aid on helping women and girls.

Last week, a coalition of East African countries approved a six-month extension to a fragile peace deal that calls for South Sudan's rival factions to form a unity government.

Canada has strong relations in the half-dozen neighbouring countries that are themselves buckling under the influx of refugees, so Akodjenou says by helping those countries the government could also make any new aid go much further.

Those countries include Ethiopia and Uganda, which are bearing the brunt of the South Sudanese refugee influx, as well as the Democratic Republic of the Congo, Central African Republic, Kenya and Sudan.

An April report by the UN World Food Program, the European Union and the UN's food-and-agriculture organization found that South Sudan, along with the Democratic Republic of the Congo, Ethiopia and Sudan, were among the countries afflicted by acute hunger.

In South Sudan alone, the Norwegian Refugee Council estimates that by July, 60 per cent of the population will face acute food insecurity, which UN defined as "when a person's inability to consume adequate food puts their lives or livelihoods in immediate danger."

Akodjenou said the South Sudan crisis is unique compared with the other more pervasive, African challenge: the northward migration of African refugees across the Mediterranean Sea to Europe, which is linked to the rise of Islamist terror groups in the Sahel belt across the centre of the continent.

"It's not easy to leave South Sudan or Uganda to go to Libya. You need a lot of money, and they don't have that."

UN envoy says Canada has a perfect opportunity to test its feminist foreign policy in South Sudan, where 80 percent of refugees and internally displaced people are women and children.

After having toured all the major South Sudanese refugee camps, Akodjenou said he's found no evidence of inroads being made by Islamist recruiters who prey on the vulnerable. The fact the country is almost exclusively Christian helps insulate it against that threat, he said.

The verdant and oil-rich South Sudan became the world's newest country in 2011 after a six-year peace process, severing itself from the Khartoum-governed Sudan after a 22-year civil war that left two million people dead and forced four million from their homes.

In a 2000 report by respected Canadian diplomat John Harker, the Alberta oil company Talisman Energy Inc., since bought and renamed Respol Oil and Gas Inc. in 2015, was found to be complicit in allowing the civil war to flourish.

The report prompted Lloyd Axworthy, then the minister of foreign affairs, to publicly push Talisman to do better.

A February update on South Sudan to the UN Human Rights Council named Talisman again as one international company that was complicit in aiding government forces in the north against rebels in the south.

The promise of peace in the newly birthed South Sudan was short-lived: civil war broke out again in late 2013.

Canada's contributions to South Sudan include almost $29 million for security and stabilization and about $98 million in international assistance.

In February, Save the Children urged the government to do more to protect children in conflict zones, citing UN figures that showed 870,000 children aged five or younger — including 550,000 babies — had been killed in armed conflict between 2013 and 2017 in 11 countries, including South Sudan, Afghanistan, Yemen, Iraq and Mali.

"Canada must step up to ensure we collectively do all we can to protect these children from further harm and help rebuild their future," Bill Chambers, the president of Save The Children Canada, said in a statement at the time.