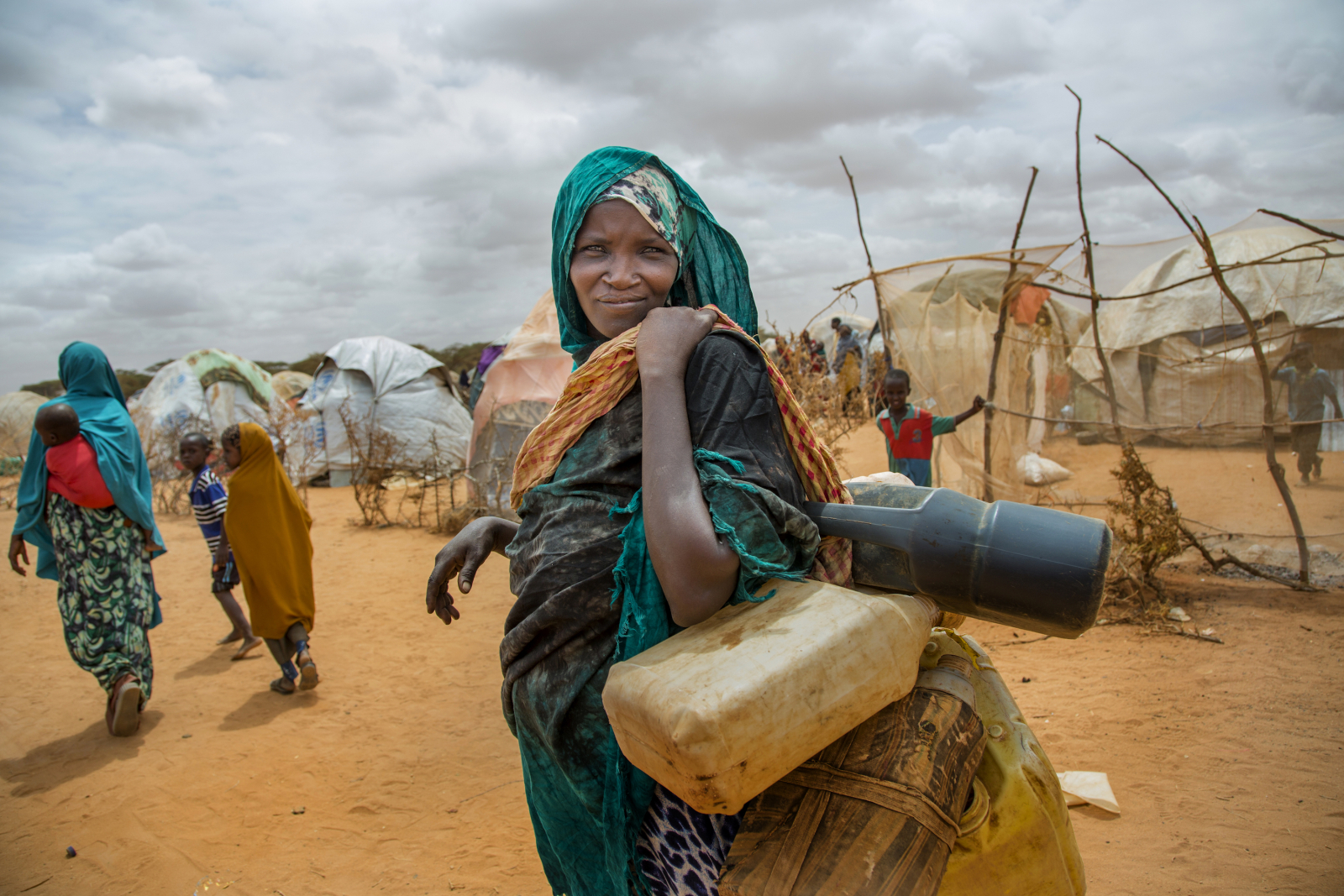 A photo on the Everyday Climate Change Instagram feed shows a Somali woman walking to collect water in Kapasa IDP Camp in Jubaland in June 2017. Photo by Georgina Goodwin
Previous story
Next story

In a poignant sign of the times, the Met Gala was trending on social media on the same day the United Nations issued its first comprehensive global scientific report on biodiversity, warning us of extinction looming over a million species of plants and animals.

Perhaps nothing can better illustrate the mass denial that climate change seems to engender in the West than so much focus on a costume party for the rich while the world around us is burning.

While conservation scientists have sounded the alarm for decades, for many politicians (and many voters) the concept of climate change remains too abstract and too obscure a possibility, for political strategists and corporations – focused on short-term goals and actions that increase electability and/or profitability -- to take on with any real gusto.

And yet, even if countries don’t appear prepared to tackle global warning, it hasn’t stopped many of them from actively preparing for one of its major and dire consequences: climate refugees. And according to author and journalist Todd Miller they’re preparing for it in the worst way possible: not by attempting to mitigate and tackle the root causes, but with increased militarization and tougher immigration policies. Instead of coming together, the world is tragically turning more inward.

According to the Internal Displacement Monitoring Centre, a person is more likely to be displaced in coming years by environmental forces than by war.

“Estimates from the Intergovernmental Panel on Climate Change, the 2006 Stern Review, and other sources predict that climate change will generate from 200 million to as many as one billion migrants by 2050. To date, no international convention has recognized the needs and rights of climate migrants, even though by 2010, according to a Red Cross estimate, they outnumbered the population of refugees from war and violence.”

Man-made climate change is increasingly responsible for storms and floods of increased frequency and volatility, exacerbated droughts and unprecedented sea-level rise. And some of the worst consequences of climate change will be in some of the poorest countries in the world --- countries that already bear the brunt of excessive pollution, deforestation, and biodiversity damage that accompanies Western industry.

Miller, recently in Montreal to give a talk at the invitation of the Université du Québec à Montréal, Raoul Dandurand Chair of Strategic and Diplomatic Studies, has covered the topic of border and immigration for more than 15 years. His book Storming the Wall: Climate Change, Migration, and Homeland Security looks into climate-ravaged communities, climate refugees, and casts a critical eye on the direct result --- increased border militarization.

Living in Tucson, Arizona, next to the U.S. – Mexico border, Miller has seen the effects firsthand, as more refugees from countries where climate change is exacerbating inequality, attempt to cross over. Climate scientists agree Central America will be Ground Zero for climate change, he says.

Miller points to the unprecedented growth of the border security market – in the United States and around the world. “There are 77 border walls right now,” he says. “There were only 15 when the Berlin Wall fell. There has been a massive expansion – ‘exponential’ is how it was described to me -- in border patrol budgets.”

“The Homeland Security and Emergency Management market was valued at over $526 billion in 2017 and is projected to reach $742 billion by 2023. These are budgets that are larger than the FBI and DEA budgets combined," he says, referring to the Federal Bureau of Investigation and Drug Enforcement Administration.

The issue is not confined to the United States and countries that may have an acrimonious relationship with the U.S. It affects all countries, including Canada.

“While much focus has been put on the militarization of the U.S. border with Mexico, there has also been less discussed fortification of the U.S. northern border with Canada, especially in the post 9/11 era,” Miller explains. “While there is no wall per se, there has been a significant increase in border patrol agents and resources, such as surveillance drones flying along the Manitoba, Alberta, and British Columbia borders with the United States, or the pre-clearance sites in Canadian airports that enacts a U.S. border in many major Canadian cities. In one such site, Canadian journalist Ed Ou on assignment for the CBC was blockaded at the Vancouver airport and not allowed to fly after he said he was going to cover Standing Rock in the fall of 2016.” These are the worrisome signs of an increasingly militarized security state.

A climate clash is coming

Instead of tackling the root cause of climate refugees, those fleeing face increased hindrances to their movement, making their journey more difficult and far more dangerous, and therefore far less appealing. It’s no accident that migrant caravans and sea crossings are so dangerous and often end in death, and it’s a deliberate choice to jail migrants in freezing-cold "hieleras' or to prosecute and treat activists who attempt to help migrants as dangerous criminals.

Not only is this approach unethical and inhumane, it’s utterly ineffective. If countries don’t start to truly tackle global warming with the seriousness required, climate-induced disasters will continue to disproportionately expose the most vulnerable in this world to its dire effects, and they, in turn, will seek out alternatives. The world will either learn to work together or face the consequences of selfishness and protectionism that will accomplish nothing.

To date, and despite an exponential increase in displaced communities, no international convention recognizes the needs and rights of climate migrants, even though they currently outnumber refugees from war and violence. Fleeing desertification, floods, major droughts mudslides, saltwater contamination of freshwater supplies, the land they live in has fast become (or is quickly becoming) inhabitable. Though climate change has forced them out, the same way refugees have fled persecution based on race, religion, race, and nationality, they are not legally defined as refugees. The countries that signed the UN’s 1951 refugee convention certainly didn’t have climate change on their radar and many are now afraid to reopen the convention, partly out of fear that it might endanger already established rights for refugees.

In 2018, leaders from 164 countries formally adopted the UN Global Compact for Migration and, for the first time, recognized climate change as a reason for migration. It’s a start, albeit it a slow one, and perhaps one that is too late.

“In the future what is being predicted is the potential that there will be more people on the move than ever before in human history,” says Miller. “This will at least be partially due to climate change events such as sea level rise, extreme weather such as hurricanes, floods, and droughts. These movements of people will not only impact the United States, but the entire globe, including Canada.”

Miller fails to understand why, year after year, budgets are higher and higher for border and immigration enforcement, and why that money isn’t spent on something that could really improve the well-being of humanity.

“While the U.S. president officially tends to be a climate-change denier in the way he talks about the issue, the growth in border security enforcement says something entirely different,” Miller says. “It, in fact, confirms a belief in a serious problem they are anticipating and planning for. Homeland Security and the Pentagon are not climate deniers at all.”

as a green party candidate i

as a green party candidate i could not agree more, but, as you say, most voters, and therefore most politicians, don't really want to know about this.... it seems too abstract to them, except in a reactive way - being proactive is not something most people seem able to do.

How weird that the "leaders"

How weird that the "leaders" and followers of the wealthy parts of the world think they are immune to the devastations of climate disruption while doing so little to curb the greedy behaviour that makes it inevitable.
They can spend trillions on physical protections/military barriers but neither of those are immune to hurricanes, tornados, floods, death dealing heat and drought. Some of the hordes of the displaced may be halted, but walls and soldiers will not keep out the real dangers, uncontrollable weather, disease, destruction of agriculture, ecocide....