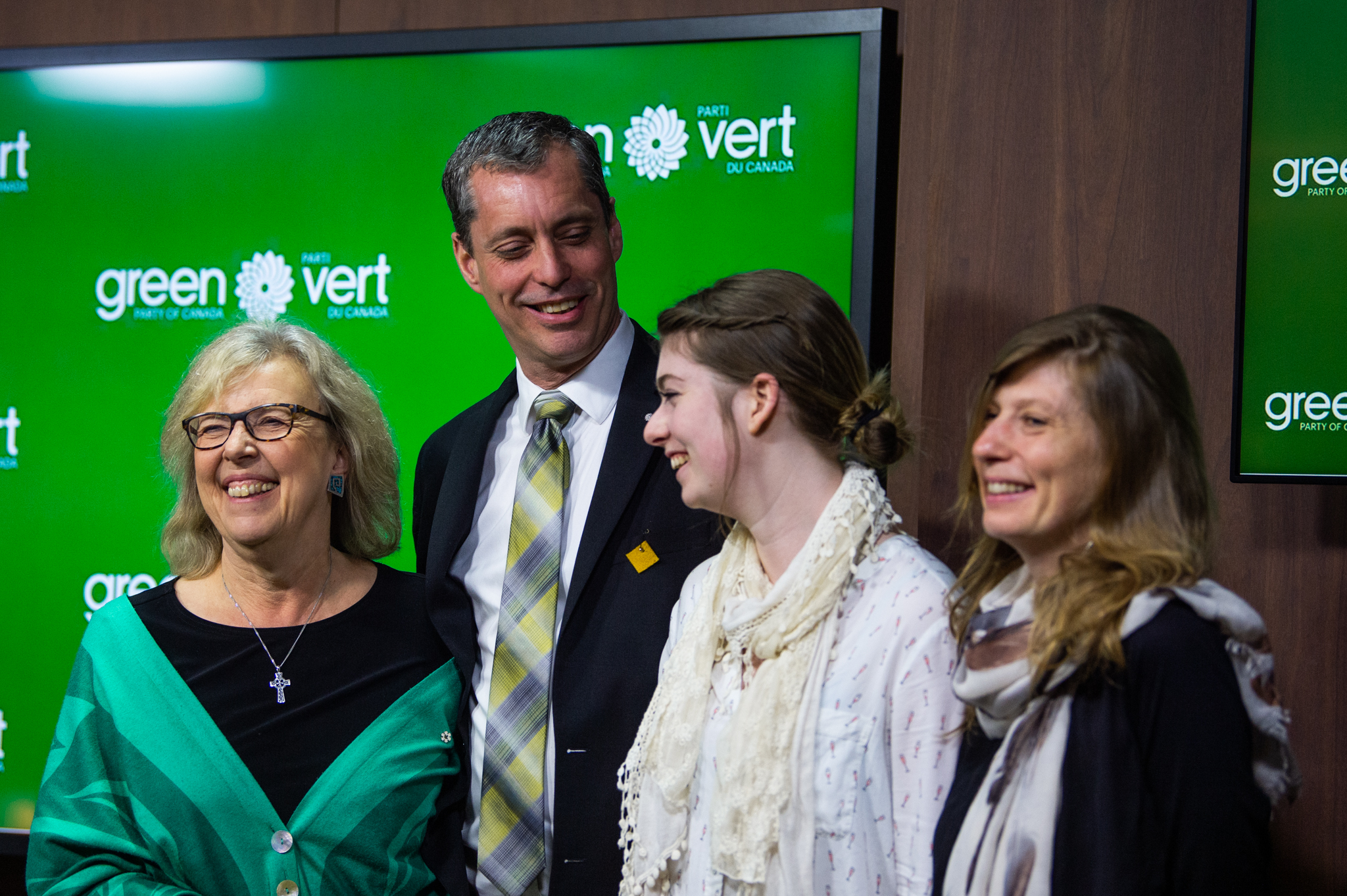 Green Party Leader Elizabeth May stands next to Paul Manly, who won the Nanaimo-Ladysmith byelection for the Green Party, Manly's daughter Aven and wife Samantha at a press conference on Parliament Hill on May 10, 2019. Photo by Kamara Morozuk
Previous story
Next story

The Green Party of Canada has introduced a sweeping climate change plan that promises to stop foreign oil imports, create a non-partisan federal cabinet and turn Canada's economy carbon-free by the end of the 21st century.

Leader Elizabeth May unveiled the 20-point plan on Thursday in Ottawa, pledging that a Green government, if elected would immediately ramp up action, including new infrastructure initiatives to spread renewable energy as well as programs to save and conserve energy.

"Some might think it's mission impossible to do what's required," May said at a news conference on Parliament Hill. "But we've costed the numbers. It's mission possible, we can do it."

She said further details would be released in the lead-up to the 2019 election campaign and that she would allow the numbers to be reviewed by Parliament's independent budget officer.

May unveiled her plan as Liberals and New Democrats pushed for MPs to declare that Canada is facing a climate change emergency that threatens the country's economy and ecosystems. She is also riding a wave of momentum that follows a stunning byelection victory by Green candidate Paul Manly in the B.C. riding of Nanaimo-Ladysmith, as well as a strong showing for provincial Greens in an April election in Prince Edward Island that saw the party form the official Opposition in a minority legislature.

The party's support has risen, nationally, to double-digit support, but still trails in fourth place behind the Opposition Conservatives, the governing Liberals and opposition New Democrats in most public opinion polls.

May said that her party's plan would require Canada to take a war-like stance to address climate change, by appointing a federal cabinet made up of politicians from different parties.

"We are in a climate emergency," she said. "Climate change is not an environmental issue. It's a massive security threat and it must be dealt with by government at all levels as a security threat that requires taking bold action. It's best done if we can possibly do it in a non-partisan way, which is why in a time of war, the opposition parties were invited in the inner cabinet to make sure that decisions that were taken were not subject to becoming political footballs."

The Green Party's plan aims to achieve a 60 per cent reduction in Canada's annual greenhouse gas emissions, below 2005 levels, by 2030, and zero emissions by 2050. This would double Canada's existing target for 2030, which May said was necessary.

"We are facing a larger threat than human species has ever been faced with before," she said.

The party also pledges to modernize Canada's electricity grid to improve transmission lines between the east and the west. In addition, the party is promising to create millions of well-paying jobs through a national building retrofit plan that would improve energy consumption in buildings across the country.

May's plan also calls for an end of imports of foreign oil, requiring instead some new investments in upgraders to turn Canada's vast resources of bitumen in Alberta's oilsands into gas, diesel and other products, while supporting jobs.

The Green Party plan also calls for the government to invest significant resources to improve adaptation, particularly for economic sectors such as agriculture, fisheries and forestry, which are vulnerable to climate change.

"Elizabeth May's Greens pledge to end foreign oil imports"
"May's plan also calls for an end of imports of foreign oil, requiring instead some new investments in upgraders to turn Canada's vast resources of bitumen in Alberta's oilsands into gas, diesel and other products, while supporting jobs."

Very odd. Does that mean the Greens support an "Energy East" pipeline?
Upgraders turn bitumen into synthetic crude oil (SCO). Refineries turn crude oil into gas, diesel and other products.
Whether Elizabeth May wants to send dilbit*, SCO, or refined products to Central and Atlantic Canada, the product needs to get there somehow. Atlantic Canada isn't connected to the West by pipeline. So the Greens will have to build one. TransCanada is no longer interested.
Eastern Canada refineries have limited capacity to refine bitumen. Complex heavy-oil refineries are hugely expensive.

"WHY CANADA’S EAST COAST REFINERIES HAVE LITTLE APPETITE FOR ALBERTA CRUDE
"Although shipping Canadian crude to Canadian refineries on the East Coast sounds like a no-brainer, logistically, it can be very expensive and impractical.
"...Since New Brunswick is 1,000 km further than the Gulf Coast, displacing 100% of Canadian foreign imports with Alberta crude is therefore unlikely to happen, even if Energy East eventually gets revived.
"Oil Price Differentials Explained: Why Alberta crude sells at a deep discount" (Oilsands Magazine, 13-Dec-18)
• https://www.oilsandsmagazine.com/market-insights/crude-oil-pricing-diffe...

Mark Sherman, plant manager at the Irving refinery, stated Energy East would send "way more than we would ever use at this refinery, so the bulk of it would all be exported".
"Energy East should be scrapped" (Edmonton Journal, Jan 31, 2016)
• edmontonjournal.com/opinion/columnists/opinion-energy-east-should-be-scrapped
"According to TransCanada’s own application, up to 90% of crude oil from Energy East would be shipped unrefined out of Canada via tankers."

"But [Ian Whitcomb, president of Irving Oil Ltd.] said his refinery would continue to purchase foreign oil even if Energy East goes ahead because it wants access to diverse suppliers.
"Imports from Saudi Arabia, which started when the refinery opened in 1960, are compelling because of the low cost of transportation on large tankers, he said.
“'We will add Western Canadian crude to our portfolio as the economics dictate, but probably not at the expense of our Saudi barrels,' he said.
"Irving Oil supports Energy East because of its job creation potential and because it would boost Atlantic Canada, a region that continues to lag economically, he said.
"The company has partnered with proponent TransCanada Corp. to build a marine terminal to enable exports of Canadian oil to foreign markets."
"Irving Oil's president says it would keep Saudi imports even if Energy East goes ahead" (Financial Post, Apr 12, 2016)
• business.financialpost.com/commodities/energy/irving-oils-president-says-it-would-keep-saudi-imports-even-if-energy-east-goes-ahead