Do any of the parties have a climate plan that matches the scale and urgency youth need? 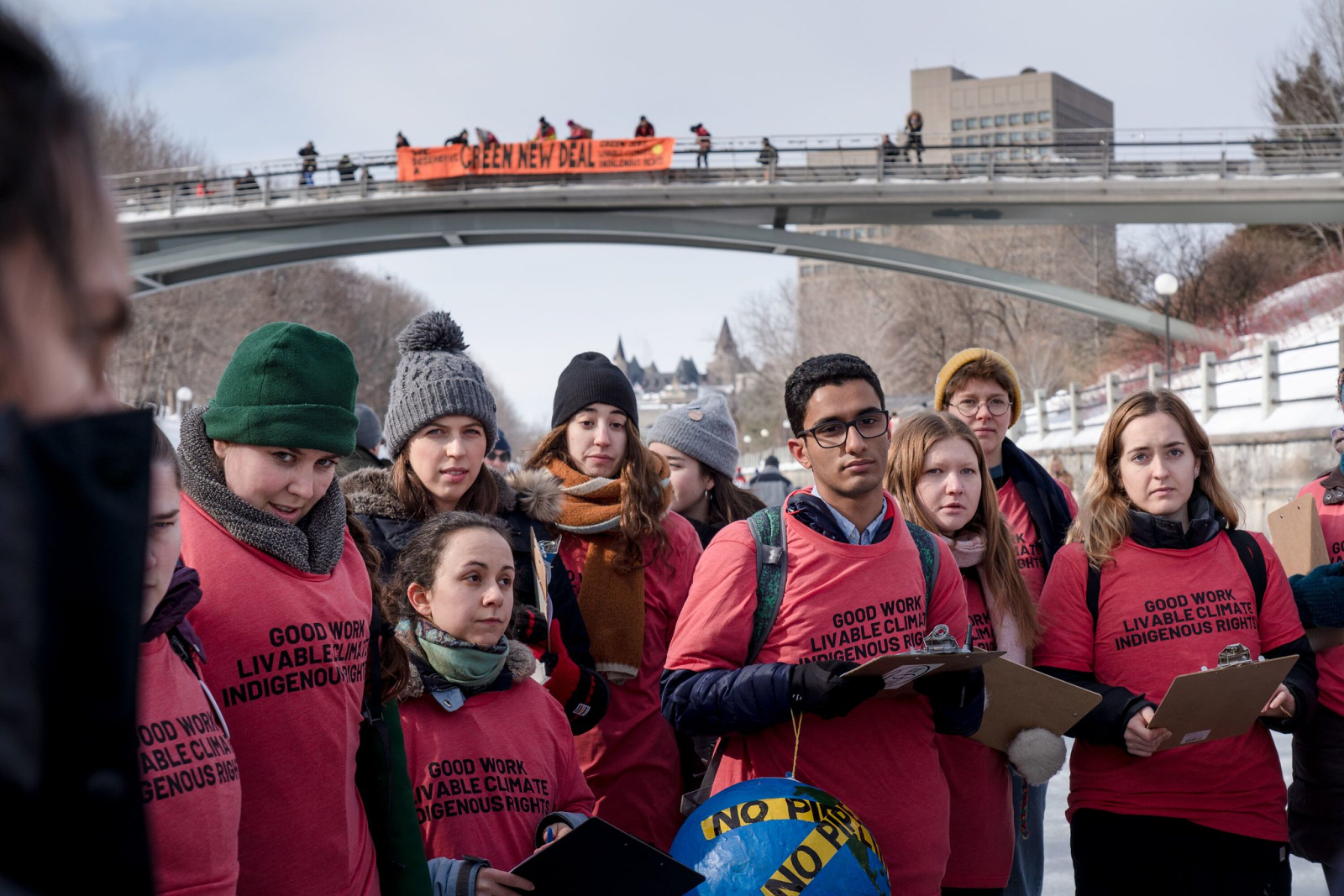 Our names are Monica and Niklas. We’re two young people who have grown up with austerity our entire lives while inheriting a dying earth. With climate change on every party’s agenda for the 2019 election our question is simple: do any of the party leaders have a climate plan that matches the scale and urgency youth demand?

Over the past few weeks, extreme flooding across Ontario, Quebec and New Brunswick has pushed climate change to the forefront of the political news cycle. As waters rose, so did calls for real action, with an intense debate this week in the House of Commons sparked by the introduction of two competing climate emergency motions introduced by the Liberals and the NDP.

The Liberals have been on hard defence, calling the NDP climate emergency motion “problematic” while simultaneously introducing their own. They also spent the last few weeks goading the Conservatives for lacking a climate policy while ignoring their own $4.5 billion pipeline purchase, as well as continuous reports that they are miles away from meeting their Harper-era climate targets, let alone coming close to Canada's Paris Agreement committments. The Liberals went as far as to suggest that something they call a “Clean New Deal” certifies them as climate leaders.

Meanwhile, Jagmeet Singh again promised bold climate moves from the NDP, becoming the first party leader to name a Green New Deal as an election priority, but he has been not been able to articulate a strong stance against projects like LNG Canada, seemingly in denial that we just can’t afford to invest in any more fossil fuel infrastructure, period.

Throughout Canada, climate change is polling as a defining election issue across the political spectrum. But, for young people like us, living in climate and economic precarity, the critical question is: how do we distinguish between climate policies that are superficial corporate handouts — like giving $12 million to Loblaws for energy efficient freezers and throwing $400 million at corporations for “low-carbon innovation” — from policies that actually meet the scale of the crisis?

As young people who have seen failed climate policy after failed climate policy from our federal governments, we know that incremental free market solutions such as carbon taxes, clean tech innovation, and tax rebates aren't working to prevent the damage we are already seeing and only exist to support a status quo that exploits the most vulnerable in our society.

Our names are Monica and Niklas. We’re two young people who have grown up with austerity our entire lives while inheriting a dying earth. Do any of the party leaders have a climate plan that matches the scale and urgency youth demand?

The IPCC has given us just over a decade to get our act together on climate change, and we need political parties to seize this moment. The current line of “economy and environment” is empty rhetoric, and people know it. Buying a pipeline and then taxing the average person at the pumps is hypocritical.

We need large-scale government action to tackle large-scale problems, and that’s why a Green New Deal is so inspiring. Through it, we could meet the scientific imperative laid out by the IPCC and tackle the mass economic, racial and social inequality our generation also faces. But a Green New Deal plan needs to be more than just a buzzword.

It needs to check the corporate power of the oil sector, which generated $13.5 billion in profit in 2017 while cutting 50,000 jobs and creating dangerously toxic air pollution for adjacent Indigenous communities. It needs to change Canada’s reliance on boom and bust extractive industries that leave workers in the dust when prices drop. It needs to combat a widening wealth gap and increasingly precarious employment that fuels growing racism and white supremacism.

A Canadian Green New Deal could create publicly owned energy utilities with high paying, low carbon jobs. It could fund initiatives like a national green energy grid, a federal jobs guarantee for care and other low carbon work, and truly universal healthcare. And those are just a few examples because a Green New Deal would retool our entire economy to tackle climate change and inequality.

That’s why we’re excited that Jagmeet Singh is starting to talk about a Green New Deal and declaring a climate emergency. But, our generation needs more than compromise on subsidizing an unprofitable LNG industry in B.C. or piecemeal solutions like taking 31 years to retrofit all buildings in Canada. We need to be bold, and leave behind the marginal, unprincipled and uninspiring ideas that the political establishment — whether it’s Notley, Trudeau or Biden — continue to push as “middle ground” climate solutions. If any politician hopes to capture the youth vote, they need to propose a truly inspiring vision for the future.

This is very exciting!

This is very exciting!

Apparently The NDP needs to become the Green Party!

Uh, so why not just vote Green, then?

That's my plan. I have

That's my plan. I have downloaded the Green Party's Climate Plan: "Mission: Possible" in PDF format. And you can access Green New Deal Canada, which supports two of the major policies promoted by the authors: combating climate genocide and inequality. As we quickly transition to renewable energy, the financial beneficiaries of the fossil fuel industry need to be heavily taxed (income tax and wealth tax) so that our governments can support workers affected by the hypocrisy and greed of their employers. Vote Green! Just look at NDP Alberta and NDP B.C., supporting fossil fuel mega projects.

This message needs to be

This message needs to be directed at Doug Ford and Justin Trudeau. Both governments are spending money on advertising, promoting their position that could be used to fight day to day problems and help achieve reduction of the carbon foot print.

The power of change is in our youth - us old geezers have run out of steam.

Yes, I think more Green Party MPs in the Commons would force more political action. It's possible with a good result that they might become the King Makers like they did in BC. My belief is that a Liberal vote is a wasted vote on Climate Action. Centrist policies are too little too late, and besides, the Liberals renege on their lofty promises the minute they get back in office. The NDP has been purposefully missing in action for the last 4 years, until it's time to get elected, showing that's all they're interested in, and so anything they say can't be trusted any more than the empty promises of the Liberals. The Conservatives, well, why vote for Climate Deniers? The only real opposition to the status quo seems to be the Greens. A realistic ideal outcome would be a minority government with the Greens holding enough seats to defeat/support any bills proposed by the minority government. If we get another majority government, we're out of luck for another 4 years.

While I agree that cutting Canadian oil production is futile, given that other nations will simply fill any void created, I would suggest that any plans to expand Canadian production through new pipelines and LNG should be stopped, and government incentives, including the 4.5 billion spend on Trans-mountain would have been better to diversifying local economies with new sustainable industries and related new jobs. Further, we need to actively discourage car traffic in favor of public transit now with major investments, reduce commute volumes through incremental work-at-home programs, encourage EV purchase, make immediate changes to the cement industry and agriculture, reinitialize programs to increase the energy efficiency of existing buildings, revitalize the electrical grid for decentralized sustainability, and so on. Much to do, much that can be financed with private capital looking for a home outside of Oil and Gas, along with leadership government seed money, and many new jobs to be created doing all of that. So, all very doable; it just requires moving away from the status quo. It's no wonder young people are getting madder and madder as our politicians blather on and on, yet accomplish nothing substantial. I hope young people get out there and vote a difference!
Here's an alternate strategy: Since the flatulence stemming from animal husbandry is such a significant greenhouse gas producer, perhaps we should put limits on the gas output of politicians. In fact, if we attached a carbon tax to political speeches, we might be able to save the environment and reduce income taxes for the rest of us. If only.

To finance these good things

To finance these good things the government should borrow from the Bank of Canada, at a near zero interest rate. The Canadian government used to do that for financing such things as the St. Lawrence Seaway. This kind of thing ended in the era of Pierre Trudeau, and nobody seems to know why.

Why on Earth is there no

Why on Earth is there no mention of the Green Party in this article? Duh, young people!