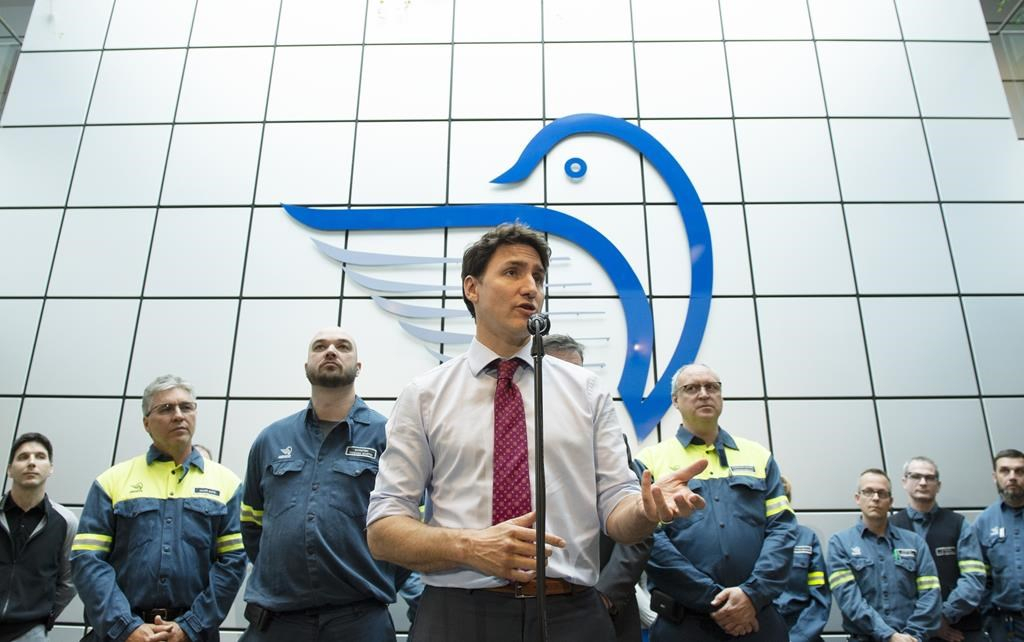 Prime Minister Justin Trudeau speaks during a visit to the Alouette aluminum plant in Sept-Iles, Que. on Tuesday, May 21, 2019. Photo by The Canadian Press/Jacques Boissinot
Previous story
Next story

"I think one of the things that we saw very clearly, and the Americans learned, is that Canadians were going to stay firm," Trudeau said at Aluminerie Alouette, in the town on the north shore of the Gulf of St. Lawrence.

"We strategically put a significant number of American products and produce under tariffs and that had an impact on governors, on members of Congress, who continued to talk to the president and to members of the administration about lifting these tariffs."

The U.S. imposed import taxes of 25 per cent on Canadian steel and 10 per cent on aluminum a year ago as a pressure tactic when negotiations on a new North American free-trade agreement got difficult.

Canada responded by putting taxes on similar U.S. goods, but also on a range of other products — from cucumbers to coffee to whisky to playing cards to lawn mowers. In many cases, these were grown, processed or manufactured in districts represented by key American politicians.

Canada, the United States and Mexico signed the new trade treaty at the end of last year; it awaits ratification in each country's national legislature.

"With the full lift of the steel and aluminum tariffs, the last major barrier against ratification has been taken away — on both sides, because it was also a barrier to the American ratification process," Trudeau said. "(The agreement) is a good deal for Canadians, for workers, for businesses on both sides of the border."

Time is short, though, with just a few weeks left before the House of Commons breaks for the summer and a federal election scheduled for October.

Trudeau said he's not worried that a closer relationship with the United States under President Donald Trump will make resolving tensions with China more difficult. The two economic giants are in a fight of their own, with Canada in the middle since the RCMP arrested an executive of China's Huawei Technologies last December on a U.S. extradition warrant.

"I speak to global leaders who are all very concerned about some of the decisions and some of the positionings that China has taken recently," said Trudeau, who was asked about reports that Canada has sent a parliamentary delegation to aid in securing the release of the two men.