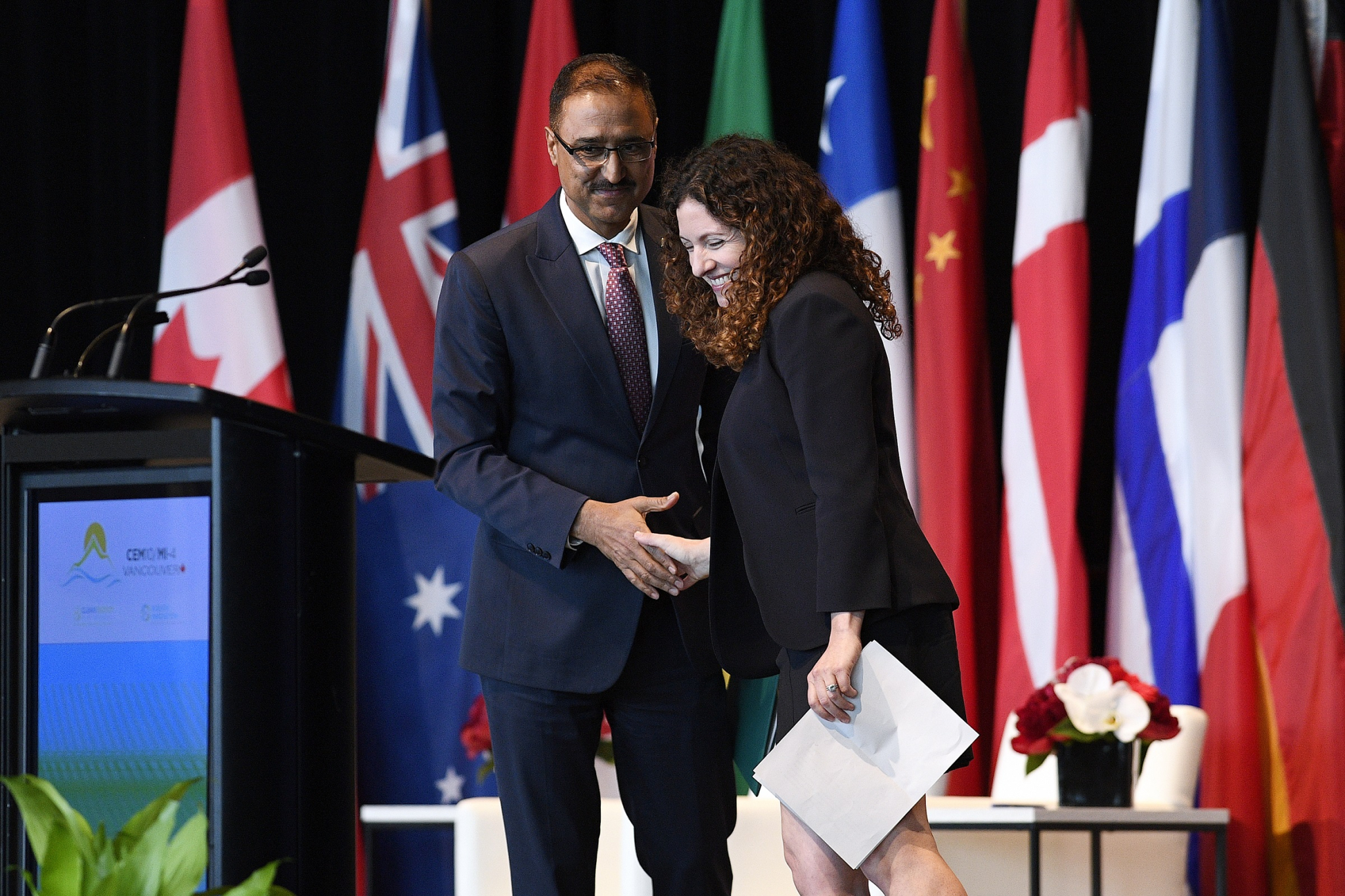 Natural Resources Minister Amarjeet Sohi and Trisha Miller, senior director of advocacy and government relations at Gates Ventures at the Clean Energy Ministerial in Vancouver on May 27, 2019. Photo by Jennifer Gauthier
Previous story
Next story

Canada is helping to fund a new initiative connected with a group of wealthy donors like Bill Gates, Mark Zuckerberg and Jeff Bezos to help startups finance new energy technologies that can lower carbon pollution.

Breakthrough Energy Solutions Canada is expected to be a “public-private” initiative orchestrated out of Natural Resources Canada, and will involve annual pitch events where entrepreneurs can perform for investors, Dragons' Den-style.

The new group is associated with a fund started by the Breakthrough Energy Coalition, which includes people like Gates, Zuckerberg and Bezos, as well as Michael Bloomberg, Richard Branson, George Soros and others who all want to use some of their vast riches to finance clean energy infrastructure.

“We are hopeful that this Breakthrough Energy partnership with Canada will be a model for developing more collaborations that will help reach this goal,” said Bill Gates in a prepared statement.

Natural Resources Minister Amarjeet Sohi said the federal government itself would be putting forward “up to $30 million” for the new group. He made the announcement at the opening of the Clean Energy Ministerial in Vancouver, B.C.

“Canada is joining Bill Gates to launch Breakthrough Energy Solutions Canada,” said Sohi. “Climate change is not only the challenge of our generation, it is also the opportunity of a lifetime.”

Prime Minister Justin Trudeau also addressed the assembled crowd via a video presentation. “I look forward to working with you as we build the clean energy economy together,” he said.

Government officials and business leaders from 25 countries are gathered in Vancouver this week to talk about issues like the adoption of electric vehicles and other technologies that leaders hope can cut carbon pollution and fight climate change.

The department will oversee calls for additional funding. The new initiative is being housed under the department’s Energy Innovation Program.

This article was produced as part of National Observer's series on Canada's Clean Economy. The series is produced in collaboration with the Ivey Foundation and I-SEA. It tracks Canada's progress to a low carbon future. National Observer retains full and final editorial control over the reporting.

Overall, I expect this to do

Overall, I expect this to do more harm than good. Where Capitalism isn't the touch of death, it becomes a wasting disease. We need co-ops, not corps.
I was quite involved in the GE Ecomagination contest. It gave them advance warning of all disruptive technology, and the opportunity to promote non-viable entries over them.

Thank you Bob for your

Thank you Bob for your comment. The government needs to put coops and community ownership forefront when they talk about renewables. The biggest enemy of widespread renewable energy (and all energy development) is the 'not in my back yard (NIMBY)' views of people that have to live with the 'development'. Through community ownership, people will be more inclined to support projects in their neighbourhood. Rather than NIMBY, people will be more inclined to say 'Yes, Please In My Backyard', because the rotating wind-turbine will be paying them and their neighbours a dividend; jobs, electricity and profits can stay local.

Everyone interested in this issue should look for a cooperative in their own community/province. there are over 30 renewable energy cooperatives in operation across the country.
ie: Alberta solar cooperative, Solar Share (Ontario), the Ottawa Renewable Energy Cooperative and CoEnergy Coop, etc.....

I'm curious if Premier Kenney would consider this to be a foreign-funded environmental group, of the sort he has vowed to remove from the Canadian political scene.

I wonder if he is including

I wonder if he is including donations from the Koch brothers and other oil-invested rt. wing foreign sources that contribute to the Fraser Institute, Homeland and other Canadian groups.