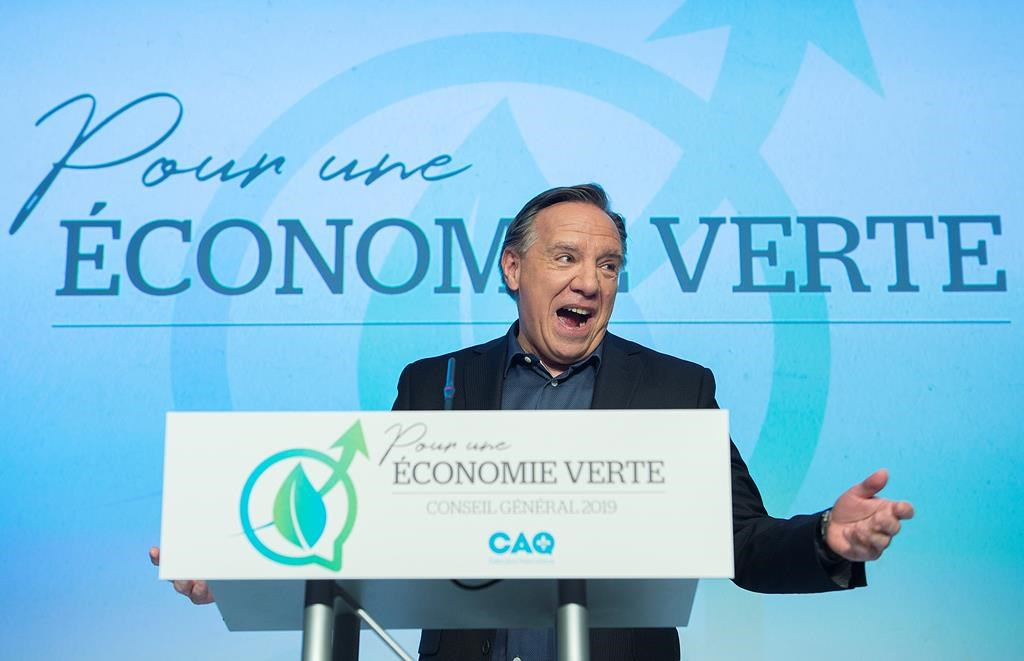 Quebec Premier and CAQ leader Francois Legault speaks during the party's general council meeting in Montreal, on Sunday, May 26, 2019. Photo by The Canadian Press/Graham Hughes
Previous story
Next story

The Quebec government will reduce oil consumption in the province by 40 per cent by 2030 through a vast program to shift transportation systems, buildings and businesses to hydroelectricity, Premier Francois Legault announced Sunday as his party held a general council meeting in Montreal.

Legault said his plan to "electrify Quebec" will require massive investments, which he said could be unlocked by reviewing the management of the government's Green Fund and by increasing funding for infrastructure planning.

He said that from now on his government will only finance public transit projects that are electric and that are built mostly in Quebec, and will take steps to ensure that all new public buildings be powered by clean energy as of 2020.

"I want that in four years, it will be said that no government has realized as many public transit projects as the Coalition Avenir Quebec government," Legault said in a speech to 1,300 party members.

Legault said he's tasked his transport minister with seven different projects, including the expansion of an existing subway line and a light-rail system being built in Montreal, as well as tramway projects for Quebec City and Montreal's South Shore.

The premier told reporters after the speech that he would look for a way to increase the involvement of local companies in these projects, pointing out that the United States requires 65 to 70 per cent local content.

"We have to see what the laws allow," he said.

Quebecers who live outside major urban centres and who do not have access to public transportation will benefit from further incentives to buy electric vehicles, he added.

The government estimates that a million electric vehicles could reduce oil consumption by six per cent.

Legault said his government would also put incentives in place to encourage owners of residential and commercial properties, as well as those in the industrial and agriculture sectors, to switch from heating oil to hydroelectricity, and called for more innovation and new technologies to aid in the transition.

The premier, who has sought to position Quebec as the "green battery of North America," also said he was confident he'd be able to reach deals to sell Quebec hydroelectricity to Ontario and New York City.

He said he would offer Ontario "a deal they can't refuse: cheaper energy and clean energy."

Last fall, Legault proposed a plan to sell Quebec hydroelectricity to Ontario so the province could avoid costly repairs to its nuclear power plants, but the proposal was rejected by Doug Ford's government.