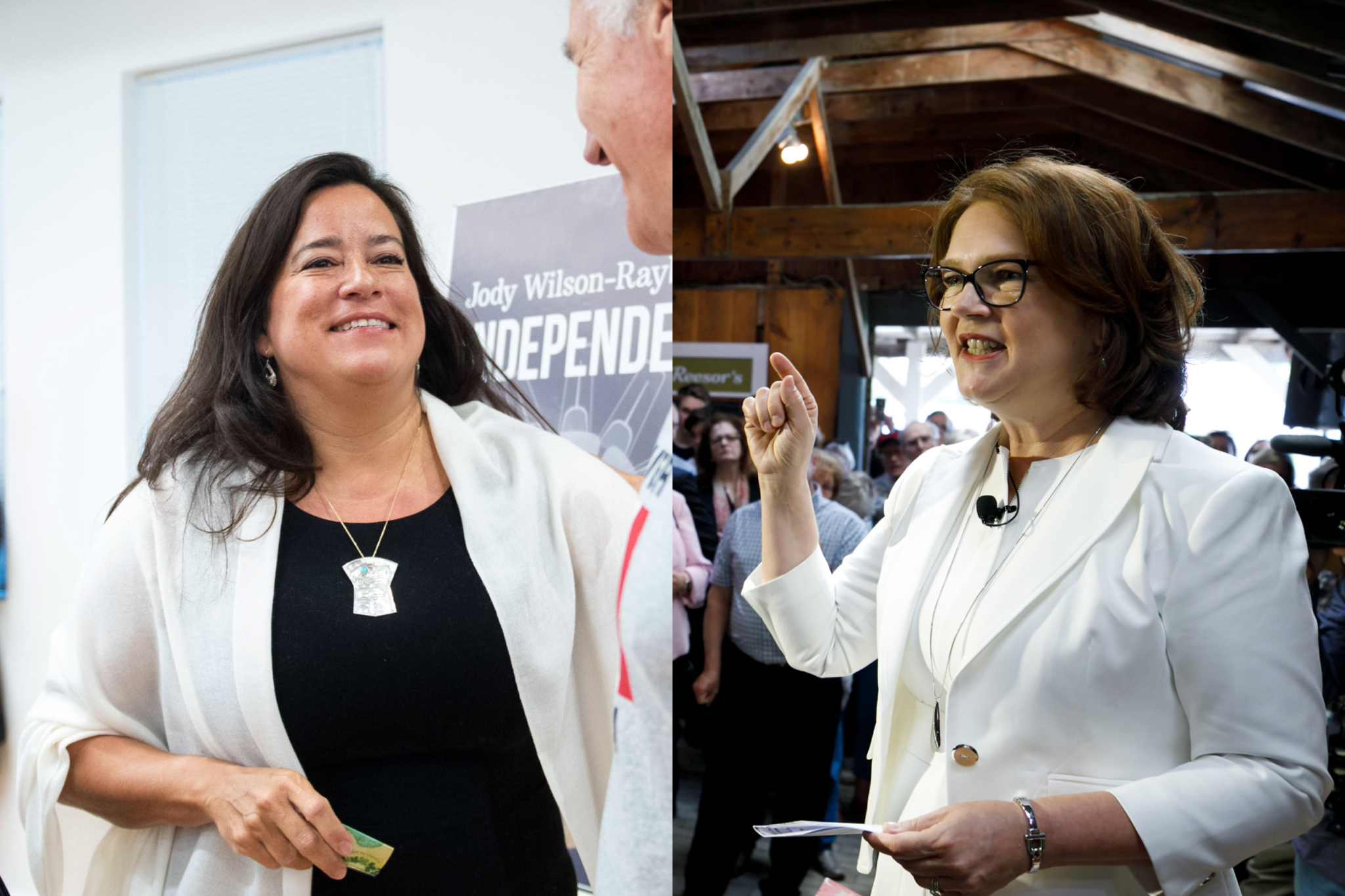 Jody Wilson-Raybould (left) and Jane Philpott (right) announce they are running for re-election as an independent in Vancouver and Toronto on May 27, 2019. Photo by Jimmy Jeong and Cole Burston
Previous story
Next story

Former Liberal cabinet ministers Jody Wilson-Raybould and Jane Philpott have announced they will be running as independents in this fall’s federal election, and promised to be allies with the Green Party on the issue of climate change.

The pair made separate but synchronized announcements in their ridings — Wilson-Raybould, the former Justice minister, at a small community centre in Vancouver and Philpott, the former Treasury Board president at a farm market outside Toronto.

Both urged the need for Canadian politics to include local representatives who are not beholden to a central authority.

"I know that it will not be easy to run a campaign as an independent. There will be challenges,” Wilson-Raybould told a crowd of locals and media gathered at the Marpole Neighbourhood House in a leafy residential neighbourhood in Vancouver's south end.

Philpott, too, hinted at the challenges of running as an independent at her announcement on the other end of the country.

"We're going to do it, together, all of us together, independent,” she said in front of constituents at a farm market in her riding of Markham-Stouffville, which straddles farmland and parts of Markham, a city on Toronto's outskirts.

"What people want most of all is someone who is willing to collaborate with others to help solve the problems our country is facing," she told National Observer in an interview after the announcement. "I'm not unaware of the challenges of running as an independent but the time has come to work beyond party lines."

Wilson-Raybould on Greens: 'I considered it very seriously'

Wilson-Raybould said she believed environmental, economic and security challenges are “deepening” everywhere, and the same “attitudes and practices” can’t be used to address these “great challenges.”

She said she has been thinking about how we tackle climate change. “On this issue in particular, I see my friend and colleague Elizabeth May and the Green Party of Canada as natural and necessary allies,” she said.

“Climate change is the issue of our generation, and we need to move the conversation forward and develop a plan that is non-partisan, multi-generational, one that will survive the life of any government.”

The political futures of Wilson-Raybould and Philpott had been an open question ever since they were kicked out of the Liberal Party caucus in early April by Prime Minister Justin Trudeau.

The two former ministers have been tight-lipped about what they had in mind. There had been anonymous sources in media suggesting that either or both would be joining the Green Party.

Wilson-Raybould held "many conversations" with May, the leader of the federal Greens, and she also spoke with NDP leader Jagmeet Singh about potentially joining either party. She said she considered May a friend and colleague.

"We share so many similar approaches to politics, wanting to move beyond partisanship. She was very actively seeking for myself and Ms. Philpott to run for the Green Party. Believe me, I considered it very seriously," she said.

"For me, personally, I know who I am, and I’m not a party person. I’m not one that looks to take a square peg and fit it into a round hole."

Having said that, she added, "that does not mean that I do not align quite closely with what the Green Party has put forward in terms of their approach to issues such as democratic reform, parliamentary reform, looking at Indigenous reconciliation, but most importantly looking at climate change."

"So yes, I think there’s a lot that the Green Party and myself, as an independent, and all parties can do together to address, for example, climate change. They have a comprehensive plan, the Green Party, around addressing and tackling in a bold way, climate change and I believe everyone should check it out.”

'I didn’t lose my voice, I found my voice': Philpott

Wilson-Raybould was thrust into the centre of a firestorm of controversy in Ottawa after The Globe and Mail first revealed Feb. 7 that she "came under heavy pressure" from the Prime Minister's Office to "persuade" the public prosecution service to cut a deal with the Montreal construction and engineering company, SNC-Lavalin.

In February she told the House of Commons justice committee that she was subject to heavy pressure for months over the issue.

Philpott, also a former health minister and Indigenous-services minister, resigned from cabinet in March, saying she had “lost confidence” in how the government had dealt with Wilson-Raybould and the fallout from the issues her situation had raised.

At her announcement Monday, Stuart Young, 61, a former chair of the Liberal Party's riding association for Markham-Stouffville, said he watched these events unfold "with great discomfort."

Philpott was "one of the most capable cabinet ministers that the Liberal Party had," Young said, citing her efforts to negotiate a health accord with all 10 provinces and three territories and her work on boil-water advisories and how she built "some great relationships within the Indigenous communities.”

“(She is) one of the most capable, brightest, well-regarded individuals, and to see what transpired after that was just incredibly painful and incredibly sad on a number of fronts, both for her and for the party and for the country," Young said.

When Philpott announced she was running as an independent, and promised to work collaboratively in an increasingly partisan political landscape, Young was in the room as a member of her new political team.

“I didn’t lose my voice, I found my voice," Philpott said, noting that many people had told her that her story has had a significant impact on their daughters.

"People in this community really care about the fact that there are huge socio-economic gaps for Indigenous peoples, and I believe that there is much more that we should be done to address those inequities."

Philpott also said that as an independent she would be beholden to no political party telling her what to say, or a political staffer telling her how to vote. “There are no longer corporate lobbyists that are influencing the direction that I would go," she said. "The only people that are the boss of me right now are you.”

"There are no rules. We're going to paint outside the party lines," she added.

Wilson-Raybould said her decision to run as an independent was motivated by the support she has seen from members of the public and by a desire to better tackle the challenges facing Canada.

“Many places in the world have chosen to erode democracy, traffic in fear and promote division, naively thinking that the response to the interconnected challenges that affect us all is to try and protect a few and put up barriers. The truth is, we have to do the opposite,” she said.

“I take great pride in what we have accomplished in the last four years. Many important initiatives were advanced both locally and nationally. But I wonder what more could have been accomplished on the big issues of our time, if it was a less partisan environment.”

She said independents can get a lot accomplished by working together, particularly “working as a first priority to change the way the Parliamentary system operates" and ensure all 338 MPs can relay the views of their constituents, "participate more fully in committee meetings, and to participate in debate in the House of Commons."

“We can support others to run as independents or to act more independently," she said. “There are more MPs than you might think that see a need for a different way of doing politics, and who do not like the current limitations of the party system, what some of us like to call independent partisans."

While Canada does not have a long history of independent parliamentarians, Philpott said other democracies including Ireland and Germany have sizable numbers of such players.

Philpott said she plans to avoid the hyper-partisan nature of much current political debate by focusing on policy solutions on issues like climate change.

"I think the thing that had been lacking is bold initiatives on the transformation of energy sources," she told National Observer. "If we are are going to be able to see a world where greenhouse gas emissions are cut at the pace that they need to be cut, then we need to be massively investing in wind and solar and wave energy."

"The technology is not the gap, the political will is the gap to this date. But we can create jobs and we can rapidly transition to renewable energy sources if people will stop arguing and start working together."

The keenly-awaited announcements on Monday is expected to complicate the broader re-election efforts of Trudeau and members of the Liberal Party. Trudeau's standing has been bruised by the infighting that led to Philpott and Wilson-Raybould's departures.

The Liberals have been badly stung by the resignation of two of its star female ministers, and some recent polls have shown them trailing the Conservatives ahead of the October election.

Editor's note: This story was updated several times on May 27, 2019 (most recently at 4:42 p.m.) to include additional quotes from Jody Wilson-Raybould and Jane Philpott.

Why anyone with their

Why anyone with their thinking neurons intact would think that a Scheer government, or any Conservative government, would be a good alternative to the Liberals is extremely baffling. What Canada needs is a Coalition government, where no political party has a majority!