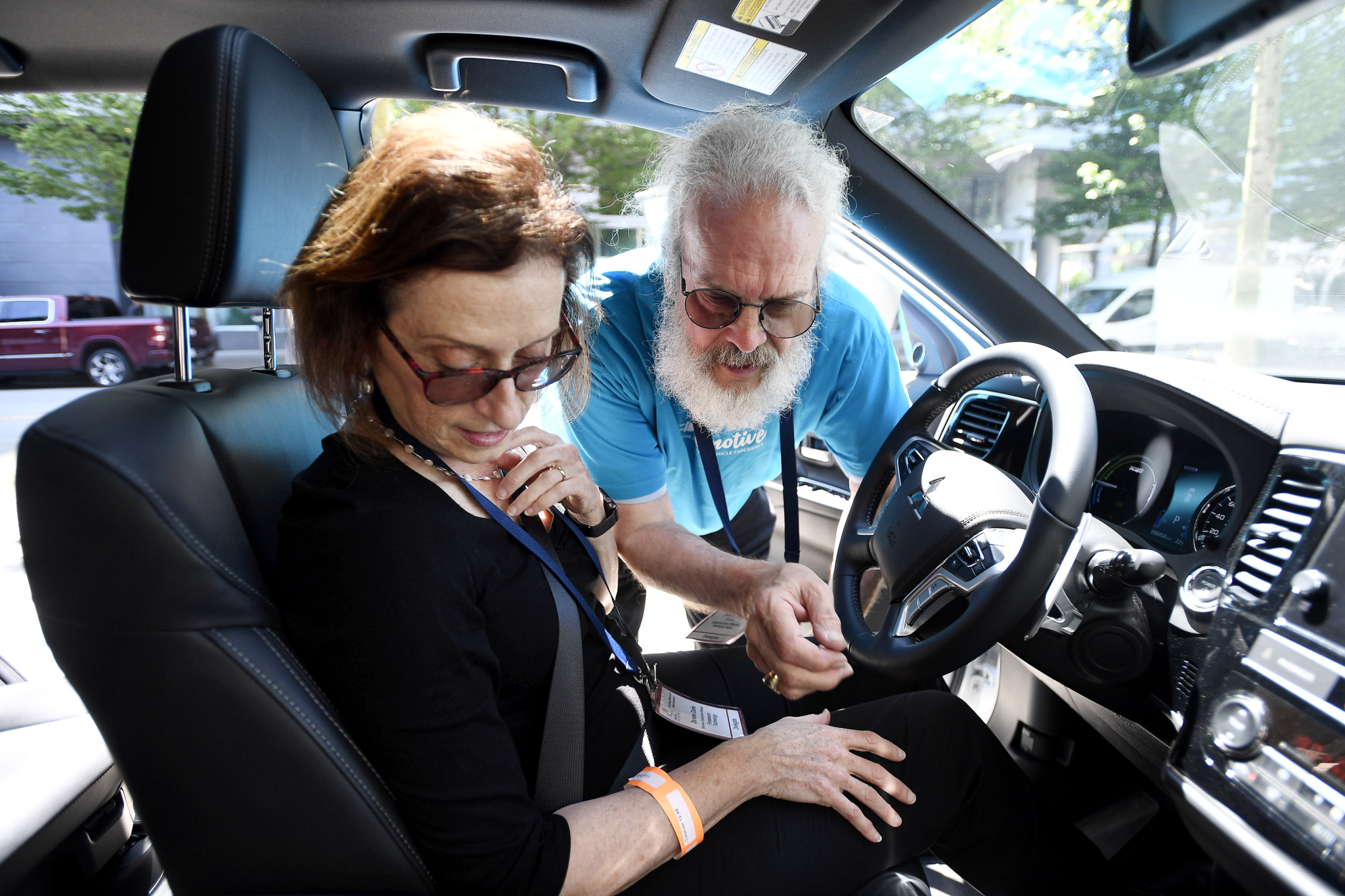 Testdriving ZEVs at the Clean Energy Ministerial in Vancouver. May 27, 2019. Photo by Jennifer Gauthier
Previous story
Next story

Zero Emission Vehicles now make up over one per cent of all passenger vehicles in Metro Vancouver. National Observer estimates that approximately 15,000 of the roughly 1.5 million passenger vehicles in Metro Vancouver are now Zero Emission Vehicles (ZEVs) based on data from ICBC, the Province of B.C., and the CEV for BC rebate program.

It’s worth emphasizing that this one per cent statistic describes all passenger vehicles driving on Metro Vancouver roads. Usually, Zero Emission Vehicle statistics are presented as a percentage of new car sales. For example, ZEVs represented more than 6 per cent of new passenger vehicle sales in B.C. in the first quarter of 2019.

Vancouver has one of the highest rates of EVs on the road among major Canadian municipalities. Stay tuned to this series for upcoming stories comparing cities and regions across the country.

ZEVs may reach one per cent of passenger vehicles province-wide by B.C. Day in August, depending on automakers’ ability to meet supply. This will happen around the time the 25,000th ZEV rolls onto provincial roads, as there are roughly 2.5 million passenger vehicles in the province. As of late May, there are currently about 22,000.

Norway is far and away the world leader in ZEV adoption, with ZEVs representing 58 per cent of year-to-date new vehicle sales. (The linked article refers to PEVs, or plug-in electric vehicle sales, comprising battery electric and plug-in hybrid electric vehicles. Fuel cell electric vehicles are currently produced in very small volumes. Toyota and Hyundai are expected to ramp production one hundred-fold by 2030, and the government of China has committed the full might of its industrial policy to back the technology, which is expected to flourish in larger vehicle segments.)

ZEVs reached the “1% of all passenger vehicles” milestone in Norway a bit more than five years ago, in April 2014. It took five and a half years to reach for ZEVs to become 10 per cent of the national fleet, but enthusiasts are cautioned that the transition may be much slower in British Columbia.

In Norway, ZEVs are exempt from value-added tax (similar to our GST) and from long-standing purchase taxes on automobiles which date to when Norway was among the poorest countries in Western Europe and personal vehicles were indeed luxuries. This means that ZEVs don’t just enjoy sticker price parity with combustion vehicles, but are considerably cheaper at point of purchase. Barring new policies, it will be many years before this is the case in British Columbia.

"ZEVs now make up over one per cent of all passenger vehicles in Metro Vancouver," calculates @ElectronComm

It’s also worth keeping in mind that while the VW Golf has been the perennial sales leader in Western Europe, the most popular vehicle in North America is the Ford F-series pickup truck. Electrifying these larger vehicles will require battery packs two to three times as large as those used in sedans, pushing sticker price parity several years away. The time when battery electric SUVs and pickups will be significantly cheaper to purchase will be further away still.

Finally, while there is now a relative abundance of ZEV sedan options, this selection has yet to arrive for larger vehicles. As a result, cost-conscious drivers who prefer large SUVs and pickup trucks may opt for plug-in hybrids and even conventional hybrids, where available. Per NRCan, the fuel efficiency of the Toyota RAV4 hybrid, at 6 L/100 km, is about one-quarter better than that of a typical Honda Civic. These factors all point to British Columbia’s automobile fleet transitioning to zero emission vehicles more slowly than Norway’s.

The combination of recently-introduced federal ZEV incentives (stimulating demand) and the province’s Zero Emission Vehicle mandate (stimulating supply) should allow B.C. to surpass Washington state in 2019. Leapfrogging California will be a tougher challenge, but one which the province’s ZEV advocates and enthusiasts will be eager to embrace.

Conventional hybrids such as the regular Toyota Prius are very fuel efficient, but only refuel with gasoline, so are not considered ZEVs. (However Toyota does sell the Prius Prime, a plug-in hybrid ZEV version of the Prius.)


Details of the 1% calculation

In late April, there were approximately 19,900 ZEVs on the roads in British Columbia. Approximately $6.5 million in CEV for BC purchase incentives were dispersed in early May before the program was topped up. Since then, a further $4.8 million has been dispersed, for a total of $11.3 million.

This is equivalent to 2,260 purchase rebates of $5,000 apiece. (This will be an underestimate, because some vehicles only qualify for incentives of $2,500 incentives, while more expensive ZEVs don’t qualify at all. It’s more likely that 2,500 or more ZEVs have been purchased in the province since May 1st.)

ICBC has published data about vehicle insurance policies around the province, revealing that at the end of 2017 there were 8,500 ZEVs in the province, of which 6,100 were in the Lower Mainland/Metro Vancouver. In other words, 68.5 per cent of ZEVs in the province were registered in Metro Vancouver. This ratio has held steady for several years, and is likely to have increased slightly with the arrival of the Tesla Model 3 last year, to 69 per cent.

Since the very conservative estimate of 15,200 ZEVs in Metro Vancouver is 1.02 per cent of the estimated 1,484,000 passenger vehicles in the region, it is likely that the actual number of ZEVs (and the actual percentage) is still higher.