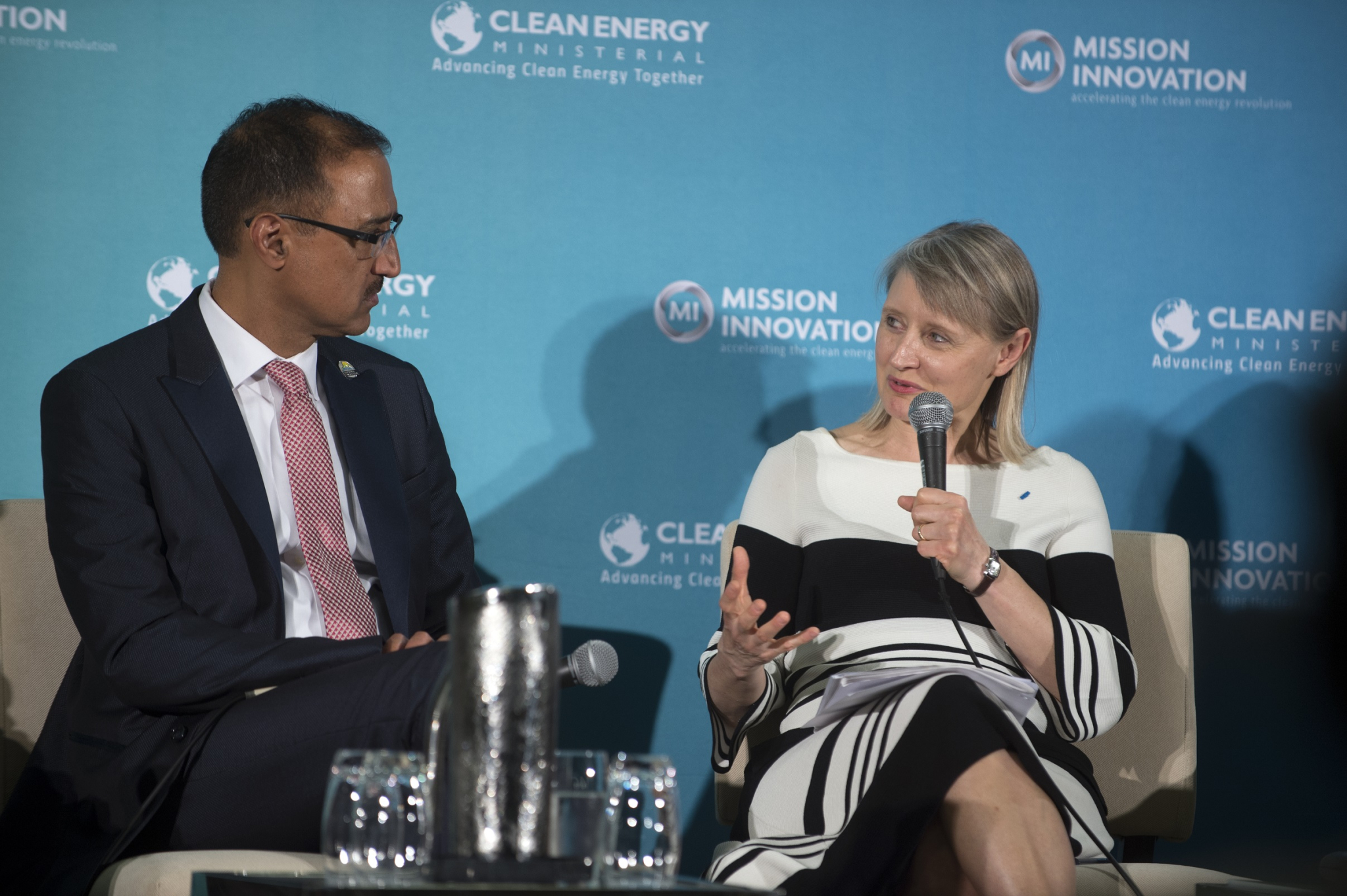 Natural Resources Minister Amarjeet Sohi speaks with Analytica Advisors president Céline Bak at a panel held at the Clean Energy Ministerial in Vancouver on May 28, 2019. Photo by Taehoon Kim
Previous story
Next story

One of the top officials at the European Union’s lending arm says investments connected with the climate crisis and the low-carbon transition are “clearly going to stay.”

Ambroise Fayolle, vice president of the European Investment Bank, was asked about the issue by National Observer while on stage at global clean energy talks hosted in Vancouver.

“It’s clearly going to stay. The needs are huge. We know that in Europe only, we would need to invest 400 billion euros ($602 billion) every year to catch up on the needs of energy efficiency,” Fayolle told National Observer managing editor Mike De Souza at a panel hosted at the Clean Energy Ministerial.

“So for this reason only, I think that they will stay. They (investors) need support from the public sector in order to finance very big projects or to take more risks. Often private investors say they would like to be more active, but it is either too costly for them in terms of capital, or they would need to have something more.”

The Clean Energy Ministerial conference, the 10th of its kind, brings together energy ministers from 25 countries as well as other officials from government, industry and non-governmental organizations that represent the bulk of clean energy investment.

The European Investment Bank (EIB) describes itself as the world's largest multilateral lender. It lent out 55.63 billion euros ($83.8 billion) in 2018. It is distinct from the European Central Bank, which carries out EU monetary policy.

The EIB has a requirement that at least a quarter of its investments must be related to climate change mitigation and adaptation. In 2018, it directed 16.2 billion euros ($24.4 billion) to this effort in 2018, or close to 30 per cent, which is above its target.

The bank is trying to generate new low-carbon markets, said Fayolle, though initiatives such as its Climate Awareness Bond, the first green bonds which began about a decade ago.

This month, Canada's central bank listed climate change as one of six vulnerabilities in the Canadian financial system, marking the first time the Bank of Canada has examined the issue as part of its regular analysis of risks to the nation's financial stability.

Fayolle's comments come on the heels of a different message delivered by Alberta Premier Jason Kenney, who told The Globe and Mail editorial board Friday that investor concerns over climate risk are the “flavour of the month."

Kenney, the newly-elected premier of a province that contains the world’s third largest reserves of crude oil after Saudi Arabia and Venezuela, said investors should focus as much on labour rights and other issues in non-democracies.

He repeated his assertions to reporters on Monday, according to The Star Edmonton, saying that focusing on one issue excludes other ethical issues worth considering.

Without climate promises, 'I will not vote for you'

This week, Europe saw a surge of popular support for Green Party representatives in elections for the European Parliament. Far-right parties also made gains in the election.

The Greens group gained 19 seats, going from 51 to 70, in the 751-seat assembly, The Guardian reported. The German Greens finished second with over a fifth of the vote.

European Commissioner for Research, Science and Innovation Carlos Moedas, another member of the panel, told attendees at the conference gathered on Monday evening how struck he had been with the voter turnout, which was the highest in 20 years according to Deutsche Welle.

“It makes me proud of my people, the people of Europe,” he said. “It gives me a responsibility as a politician, as a man, as a person that really believes you have to go from words to action.”

Moedas served in the Portuguese legislature and in Portugal's national government before assuming his position as commissioner in 2014.

On Tuesday, Moedas, who is a member of Portugal’s Social Democratic Party, relayed a story to the panel about going to vote in the European elections with his 18-year-old daughter, when he realized the state of public opinion.

The Social Democratic Party came in second place in Portugal with six seats and 22 per cent of the popular vote, similar to their performance in 2014, Politico Europe reported.

“On the way to voting — and she knows what my party is — she was going, ‘dad, I really don’t know, because I really want to vote for a party that the first priority is about climate change...can you promise me? Because if not, I will not vote for you.’”

The Paris Climate Agreement calls for financial flows to be aligned with the agreement, noted founder and president of Analytica Advisors Céline Bak, another panel member.

There are several ways this is being carried out, Bak noted: the G20’s Task Force on Climate-related Financial Disclosures, for example, focuses on making companies more transparent for shareholders to determine the impact of climate change on their operations, and the impact their business is having on the environment.

The Government of Canada acknowledged this as a priority in this year’s budget, she said, and an “expert panel” is expected to present its findings on the matter next month.

Another is the work of the International Energy Agency, said Bak. The group’s World Energy Investment report shows the true scale of investment required in order to kickstart real sustainability. A third element is the Network for Greening the Financial System. The Bank of Canada recently joined this effort.

'We were working in a parallel way' with Gates

Moedas also discussed a new 100 million euro ($150 million CAD) fund that was announced on Tuesday — part of a new partnership between the commission and Breakthrough Energy, an initiative connected with wealthy donors like Bill Gates and Jeff Bezos that aims to help finance clean energy technologies.

This marrying of public and private investment is needed to help further the low-carbon economy, argued Moedas.

Natural Resources Minister Amarjeet Sohi made his own announcement on Monday of a Canada-focused version of the initiative, dubbed Breakthrough Energy Solutions Canada.

It is also expected to be a “public-private” initiative that will be run out of Natural Resources Canada and involve annual pitch events. The Breakthrough Energy Coalition includes people like Mark Zuckerberg, Michael Bloomberg and Richard Branson.

Moedas and Sohi both said they were unaware of each others’ announcements. “Minister, you announced something on the first day that I thought was curious, that we were working in a parallel way with the Bill Gates foundation,” Moedas said, grinning.

“I didn’t know either,” Sohi replied with a smile. He said it showed the need for closer co-operation.

The minister announced over $15 million in clean energy funding for projects largely on the island of Haida Gwaii on the west coast of British Columbia, including $10.4 million to the Skidegate Band Council and the Old Massett Village Council for the island to go 100 per cent renewable.

On the panel, he said he felt that “Canadians are ahead of their politicians when it comes to taking action on climate change, because they see the impact on their daily lives.”

Sohi also said countries need to make sure that the low-carbon transition doesn’t leave behind workers, using a term — “just transition” — that the government has previously applied narrowly in its phase-out of coal-fired power plants nationwide by 2030.

“The only thing I would caution is that, as we move forward, we just can’t lose sight of the fact that there are people who are being impacted as we transition to a new economy. We cannot afford to leave those people behind, we need to bring those people along,” said Sohi.

While the minister did not explicitly refer to oil and gas workers, some environmental advocates have been looking to the government to expand its “just transition” approach to all fossil fuel workers along with just those in the coal industry.