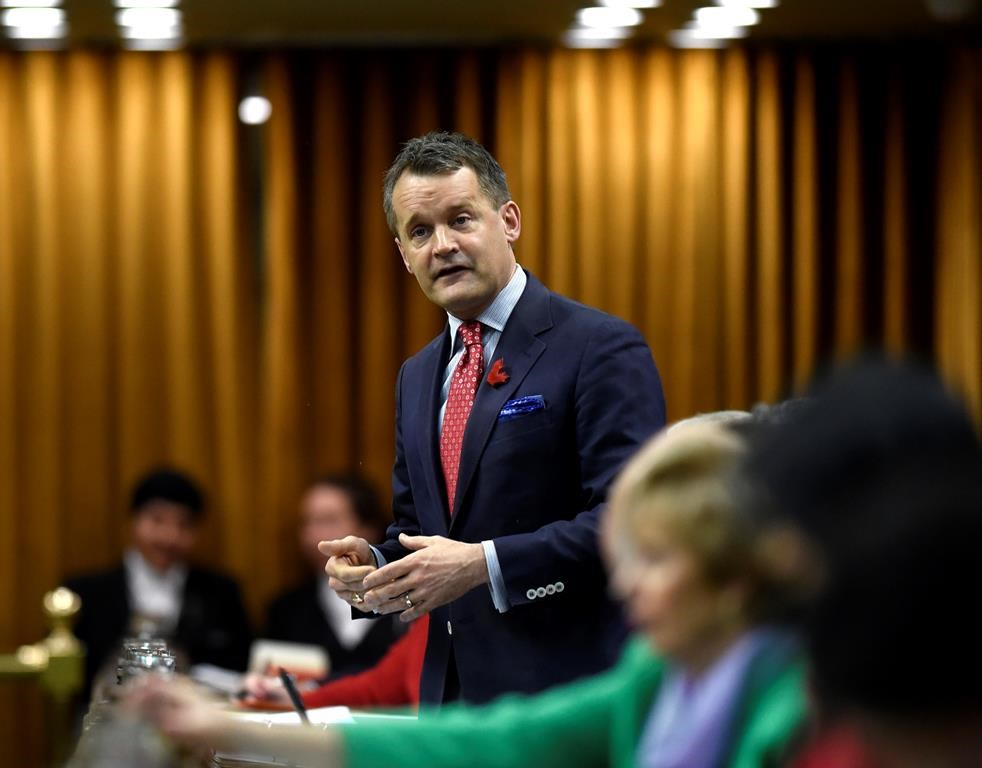 O'Regan, then-Minister of Veteran's Affairs, rises during Question Period in the House of Commons on Parliament Hill in Ottawa on Thursday, May 16, 2019. File photo by The Canadian Press/Justin Tang
Previous story
Next story

The federal government failed to reach a planned agreement Wednesday on a specialized health facility with a northern Ontario First Nation plagued by mercury contamination.

Ottawa had expected to sign a memorandum of agreement during a much-anticipated visit to the community by Indigenous Services Minister Seamus O'Regan but the chief of Grassy Narrows First Nation said it wasn't possible because he needs action his people can rely on.

"I am disappointed, but we are not done," said Chief Rudy Turtle after lengthy negotiations with O'Regan.

"We need to be certain that our loved ones who are hurting from mercury poisoning will finally have a place where they can be cared for with dignity. I will not rest until I am sure that the promise of the mercury home will be kept."

A news advisory issued earlier this week ahead of O'Regan's visit to the community said there would be a memorandum of agreement "outlining a path forward to meet the long-term health needs of the community which has been impacted by exposure to mercury."

The minister's office generated much anticipation for the visit by promoting that there would be a signing ceremony, the community said in a statement.

Ultimately, a deal could not be reached.

On Tuesday, Turtle told The Canadian Press that discussions were still underway with Ottawa on the contents of the proposed agreement, which would not be legally binding.

The proposed mercury home is envisioned as a specialized medical facility where members of Grassy Narrows First Nation who live with lasting impacts of mercury poisoning, including impaired peripheral vision, hearing and speech, can seek treatment in the community.

The contamination stems from when a paper mill in Dryden, Ont., dumped 9,000 kilograms of the substance into the English-Wabigoon River system in the 1960s.

Help for the community seemed to be on the way when the federal government promised a specialized treatment facility in November 2017 and a feasibility study was produced last fall outlining costs and design ideas.

Turtle has urged the federal government to put $88.7 million — the estimated 30-year cost for the facility, according to the feasibility study – into a trust fund for the community to ensure the project moves ahead no matter the results of the October federal election.

In a statement late Wednesday, O'Regan said he is "obviously disappointed" an agreement was not signed, but stressed the federal government has made progress.

"Building a health facility in Grassy Narrows is our priority; that's why Chief Turtle and I met in the community today," O'Regan said.

"The people of Grassy Narrows have suffered for over 50 years. We're working in close partnership in the best interest of the community. And we're committed to getting this right."

In January of 2017, a spokesperson for the prime minister said he would deal with the mercury crisis "once and for all", the community said.

"Grassy Narrows has invited Trudeau to visit five times, but he has never accepted," it added.

At the end of March, Trudeau apologized for his response to a protester who interrupted a Liberal fundraising event to draw attention to the mercury poisoning in Grassy Narrows.

As security escorted the woman out, Trudeau thanked her for her donation: "I really appreciate your donation to the Liberal Party of Canada."

Isn't it wonderful how often

Isn't it wonderful how often powerful people expose their inner lives and mental workings when their tongues become disengaged from their brains? We used to call these "lapses in judgement" Freudian slips. Or truth forceing its way past the stumbling tongue?

History books are full of the "mis-speakings" of politicians and once revered thinkers, exhumed from the buried archives of official and private correspondence. Now, the unruly fingers have replaced the impulsive tongues on social media. Careful observation by thoughtful people is more essential than ever if we are to survive the annihilating instincts of the powerful, privileged elites.