BC has entered the era of extreme old-growth logging. We must stop it. 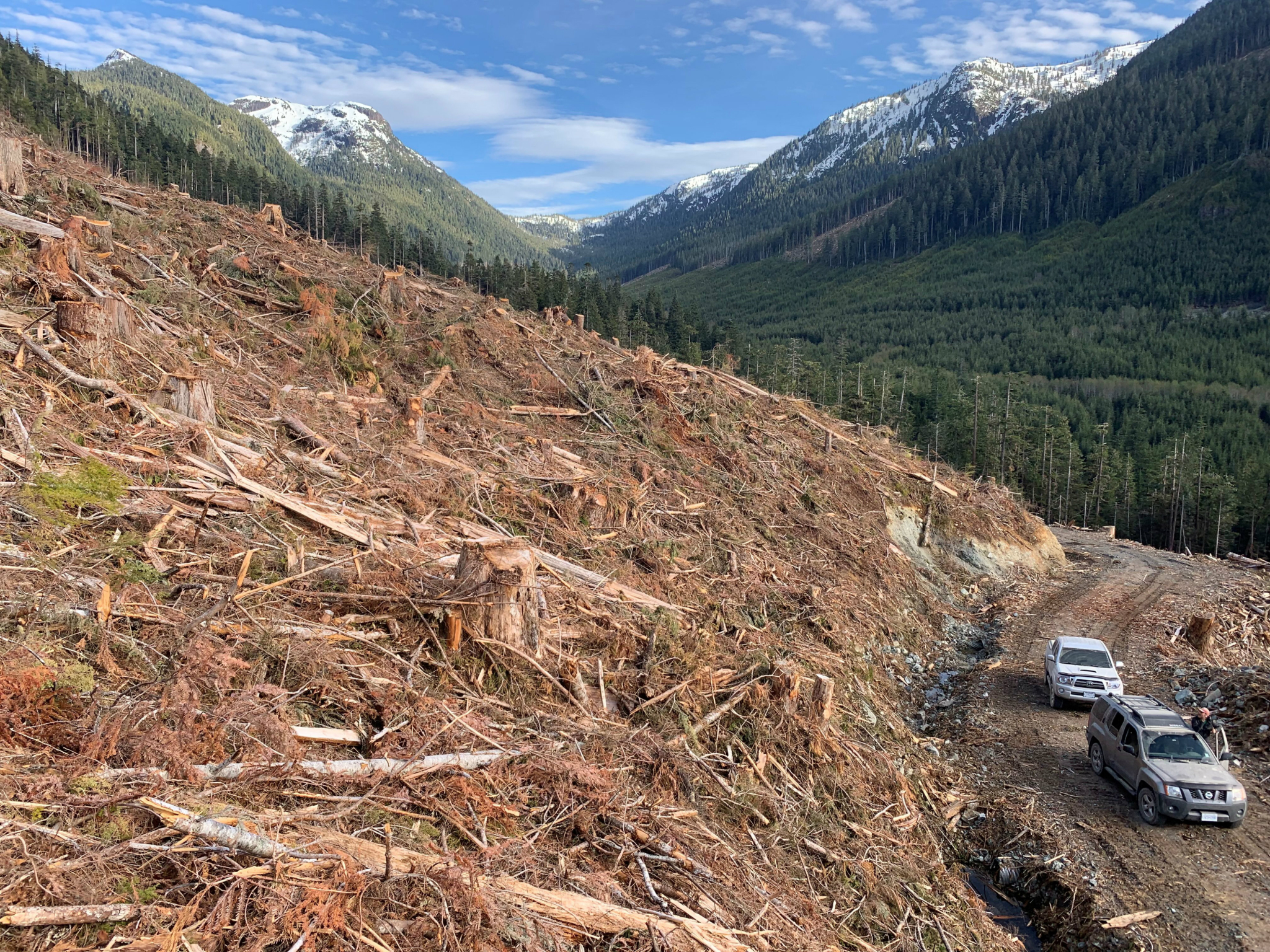 Clearcutting B.C.’s spectacular, globally rare old-growth forests was never a smart idea. Destroying the last of them in the midst of a climate and biodiversity emergency is extreme.

As logging companies can no longer easily find big old-growth trees, they’re pushing into increasingly controversial areas. Many of these targeted ancient forests are extremely endangered. Others are areas where industrial logging causes extreme dangers like landslides, now worsened by climate change-induced extreme weather. Some of these areas hold irreplaceable cultural value for Indigenous nations and many have higher long term value left standing as part of a diverse economy, compared to short term profit from their destruction. All of them provide clean water, clean air and carbon storage.

The term “extreme fossil fuels” has emerged as oil, gas and coal industries push into areas that are harder to extract from. Oilsands, fracking, Arctic drilling and ultra-deepwater oil are just a few examples. These cause greater risks and more damage to the environment and the climate.

We can draw parallels and call what’s happening in B.C.’s forests extreme old-growth logging. In both cases, corporate interests are ignoring the urgent need to stop releasing carbon. Instead, they are targeting both emissions intensive fossil fuels that scientists consider "unburnable" and carbon-rich forests that must be considered "unharvestable" if we are to maintain a safe climate.

Worse still, our provincial government is supporting both extraction and export of an extreme fossil fuel in the form of fracked gas as well as extreme old-growth logging through its own logging agency, BC Timber Sales (BCTS).

"Corporate interests are ignoring the urgent need to stop releasing carbon - they are targeting both fossil fuels that scientists consider ‘unburnable’ and carbon-rich forests that must be considered ‘unharvestable,’" writes @JensWieting

The unprotected, spectacular old-growth stands next to the beloved Juan de Fuca Trail in Pacheedaht territory are an example. These ancient trees are close to the “Big Tree Capital” tourism and recreation destination of Port Renfrew. They’re part of the last remaining patches on southern Vancouver Island, where the majority of people on the island live. And, yet, 109 hectares were recently put up for auction by BCTS.

Instead of taking the resulting public outcry seriously, BCTS only removed these critical areas from auction temporarily to “seek additional engagement.” Their vague response doesn’t help to restore any trust, as concerned citizens expect transparency and will want to know when they might have to be ready to fight this proposal again.

An even less hopeful story is afoot in Schmidt Creek located in Tlowitsis-Ma’amtagila territories, on northeastern Vancouver Island. BCTS has auctioned hundreds of hectares in the area. They are now quickly being clearcut, putting at risk the globally unique orca rubbing beaches of Robson Bight. My colleagues visited in early May and were stunned by the destruction. Clearcutting on steep slopes like these is even more dangerous in the context of our climate emergency, with growing risk of droughts, floods, landslides and fires. This area is part of the last relatively intact old-growth on eastern Vancouver Island.

BCTS is also the culprit in the “Donut Hole” — an unprotected area of spotted owl habitat completely surrounded by Skagit and Manning provincial parks. The international outcry came too late to stop a logging road and several clearcuts there, which now threaten the integrity of one of the last largely intact landscapes close to Vancouver and Seattle. Conservation planners had assumed this area would eventually be added to the surrounding parks. We still don’t know whether BCTS will log even more.

Reviewing BCTS’ multi-year plan Sierra Club BC found that this publicly-funded government agency is preparing to cut another 8,800 hectares of old-growth forest on Vancouver Island. In addition, there are several logging companies on Vancouver Island which — combined with BCTS logging — are clearcutting about 10,000 hectares of old-growth a year, or more than 30 soccer fields per day.

Species loss due to habitat destruction across B.C. is part of a global trend hundreds of scientists warned about in early May. The UN backed report showed that globally, one million species are at risk of extinction, with habitat destruction the primary driver.

The report found that three-quarters of the world’s land has been impacted by human activity. For Vancouver Island, the numbers look even worse. Here, only about a fifth of the original productive old-growth rainforest remains unlogged. Nearly a third of what remained standing just twenty-five years ago has since been destroyed.

Conservation science used in the Great Bear Rainforest shows that destroying more than 70 per cent of old-growth means destroying the web of life that depends on ancient trees. A 2016 Sierra Club BC assessment showed about half of Vancouver Island and the South Coast are beyond this threshold for high ecological risk. By maintaining business as usual and ignoring nature’s limits, the B.C. government is now responsible for extreme, extinction-level logging across vast parts of the province.

The growing public outcry and conflict over the B.C. government’s support for extreme old-growth logging shows that British Columbians want change. Tinkering around the edges is not enough. Vancouver Island and other parts of the province need a bold plan for healthy communities and ecosystems that truly acknowledges our climate and biodiversity emergencies.

The BC government is currently inviting British Columbians to provide input into improving BC’s forestry regulation, until July 15. The improvements must include an end of all forms of extreme old-growth logging. Sierra Club BC is planning a province-wide day of action at MLAs’ offices on Thursday June 6, calling on the B.C. government to protect old-growth forests and improve forest management.

The burning secret in B.C.'s forests

BCTS anf successive BC governments are now risking being compared to the rapacious destruction of tropical forests in Brazil, in Southest asia, in Australia, and Africa. Soon, there will be insufficient forest cover to act as mediators in the feedback loops Climate Scientists are urgently warning against. It appears that those who strip the wealth from the planet are rushing headlong to grab the profits while they can - assuming, I suppose, that their stolen wealth will cushion them against the consequences. Their thinking is deranged as you would expect. They are all exhibiting the perfect storm of terminal panic. Likely they will be among the first to succumb, despite their hoarded wealth.

The logging and clearing

The logging and clearing seems to be a common worldwide accelerated phenomenon, Today more than in the past . The global trend seems to have similarities that reflect neglect . A world community without a say. Seperate states wielding contractual ownership over one world, as their right , harboured by politicians who trust their limited scope, and still depend on nature's lifeblood for success in their limited tenure as rulers. Hoodwinking the masses into believing for just a day more, until whats left is gone forever. Fauna wiped off the face off the Earth, never to be seen even by their children's children's children. Well, done you blokes.

Here in the Central Highlands

Here in the Central Highlands of Victoria, Australia, they are logging Melbournes water catchment areas, and have depleted the water runoff by 30% in 30 years, and now, for the first time, we are having to turn on our desal plant due to 'low rainfalls in the area over the past 2 years'. Our Mountain Ash forests create rain, these enormous trees are actually too tall for water to reach the leaves, so rely on mists to collect water. The tallest flowering trees in the world, some have been recorded taller than the Californian Redwoods. They are unique, and confined only to areas in Victoria and Tasmania, where wildfires recently threatened the oldest standing old growth forest, and killed many trees. Luckily, the Centurion survived. Loggers tell us that these forests are all regrowth, and yes, fires have hit many areas of the forests, but, when it is intact, it survives the fires, and even slows them down. These forests, when intact, are wet forests, 100mt trees with tall ferns and rainforest understory. The trees live to over 500yrs, and the tree ferns are probably twice as old, if not older. The crepe myrtles are just as ancient. These forests have history that is older than many civilisations.

I doubt it, considering these

I doubt it, considering these are the descendants of All the oligarchs who came before... This invade, rape, pillage, series of cataclysms, then re-starts has been going on in human history for Much Longer than we know.

It's almost as if people want

It's almost as if people want homes, schools, heat, light, food, hospitals, and libraries. Not you of course, you're living in perpetual "earth hour" shivering in the dark while you starve to death. It's all very virtuous.

Look, it's one thing to promote and lobby for better resource management and alternatives, but it's another to pretend somehow that "others" are doing the raping and pillaging with bad intent and YOU are the innocent, virtuous ones. You and your loved ones don't benefit or NEED those very resources. Sorry you all use these products, you consume earthly resources....full stop. Get off your high horse. I call bullshit.

Hi Mike, here is an excellent

Hi Mike, here is an excellent response to the old, tired argument that people advocating for preserving the natural life support systems of the planet while using some of the same environmentally harmful products are hypocrites. Give it a read
https://ricochet.media/en/535/its-time-to-stop-calling-climate-activists...