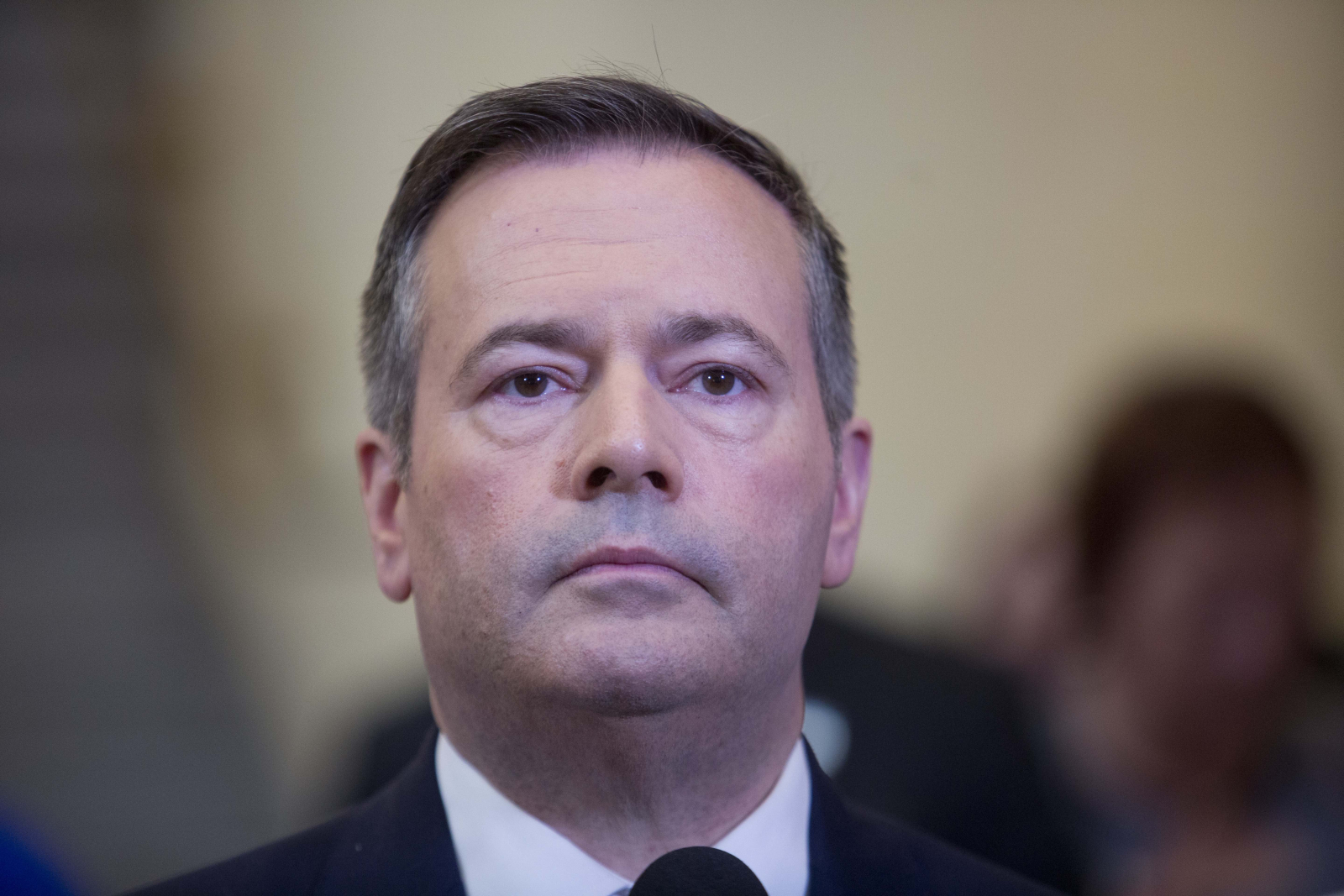 Alberta Premier Jason Kenney appears to frown during a news conference in Ottawa on May 2, 2019. File photo by Andrew Meade
Previous story

Alberta Premier Jason Kenney cancelled a celebratory event at an Esso gas station on Thursday to mark the repeal of the province's carbon tax, due to wildfires that have been raging for days in the Western Canadian province.

“As of today, the NDP carbon tax in Alberta is gone,” Kenney announced on Twitter Thursday morning.

About 5,000 people were evacuated more than a week earlier from the city of High Level and surrounding areas, in the northern part of the province, because of wildfires. The emergency has plunged large parts of Western Canada, including British Columbia, under a toxic smoky haze.

A price on carbon is designed to dissuade the burning of fossil fuels that contribute to the global climate emergency, which is expected to increase the frequency and severity of wildfires in the coming years and decades.

As of today, the NDP carbon tax in Alberta is gone.

Join me LIVE as I speak to Bill 1: the Act to Repeal the Carbon Tax.https://t.co/nSRKpc0tjB #ableg

It is incredibly tragic to walk through this orange haze while careless politicians are in the legislature introducing a bill to kill our - already weak - climate change initiatives. pic.twitter.com/pGBbygab1w

My heart goes out to the families in Paddle Prairie Métis Settlement who have lost their homes. Officials are working around the clock to fight these wildfires. #ableg

Kenney has made the cancellation of the carbon tax and other policies meant to address climate change a top priority of his government, which was elected with a strong majority in the oil-rich province's April 16 general election.

Legislation to cancel the carbon tax was the first law Kenney's government introduced in the Alberta legislature after the election. He had scheduled the celebratory event at the gas station in Edmonton later in the day, but then decided that it might not be a good idea.

*This event has been cancelled so the premier can receive an internal, real-time briefing on the status of Alberta’s wildfires," the government said in a statement.

In other news... The Apocalypse is upon us. #yeg #yegwx pic.twitter.com/Mr2sb8qXaJ

This.
This shows how the #UCP insiders put ideology and petty politics ahead of Albertans.
Her mind could clearly not be further from the families who have been chased from their homes by the actual 🔥.
She has deleted this tweet but there is still no apology. #ableg #cdnpoli https://t.co/VZw9YGrrW8

In its most recent update, Alberta says there are now 29 wildfires burning in the province, including 10 that are out of control. Environment Canada issued a “moderate risk” air quality warning for Edmonton and other communities.

The area covered by wildfires is now larger than 1,300 square kilometres, but the province has started to make emergency funds available for food and other expenses to homeowners who have been forced to flee their homes.

In a May 26 video posted to Twitter, Kenney said leaders near High Level were “optimistic” about the wildfires. “Everyone is working together extremely well,” he said, and thanked firefighters for their work. He also promised financial support to those forced to evacuate due to the fires.

“We’re hoping and praying for the best tonight,” he said.

King Kenney, King of Wilful Ignorance and Self Serving Rhetoric. Thick thick smoke for a thick thick premier. How apropos. That shameful and completely thoughtless tweet from the head of UCP communications says it all about the peanut-brains making policy in Edmonton these days. As incapable of shame as they are ignorant of science.

I used to think the late

I used to think the late unlamented Ralph Klein was the king of the idiots. It looks as if we have a new bozo that will surpass Ralph. We're in for four years of insanity.

Wow if u people want to talk

Wow if u people want to talk ignorance please look in the mirror JK is doing what is best for Alberta and if any of you thought through your climate change rhetoric you would know that costing tax payers the last thread of what they can badly hang on to now ,, will never change the climate what will save our planet is cleaning it up, planting and reclaiming areas of wild forests keeping controlled forestry and making jobs in the clean up world etc etc ,, action !! Not poverty stricken fear mongering ! We need Alberta back on track and jobs to keep our families then and only then do we have the resources to make changes to what the world needs most a responsible people educatenyourselves and stand behind a leader that is setting our Province back o it's feet after a long and hard hunger pain caused by selfish and outlandishly political irresponsibility!

So, the money from carbon

So, the money from carbon taxes go directly into funds for cleanup, cleantech and mitigating these effects as well as making it economic sense for large businesses to move away from a large carbon footprint to a smaller one. Life is hard, and as Canadians we have it easier than almost everyone else in the world. Don't have to worry about starvation daily? You're better off than hundreds of millions of people in the world. Live on more than 3 bucks a day? Congrats! You have a better life than over 3 billion people. Don't have that cottage or that nice new pick up you want? That sucks, but don't say you're hanging on by a thread. An extra 5 cents a litre's not going to kill you.

You reasoning is as

You reasoning is as convoluted as your writing.

Kathy, you are not looking at

Kathy, you are not looking at the big picture, which is that life itself is at risk, unless we drastically and urgently reduce our global dependence on fossil fuels. Not in centuries, not even in decades, but in years. I am not ignorant. I challenge you to read the IPCC reports of the last few decades, or at least their summaries for policymakers. In particular, read the most recent IPCC report, which warned the world that we are approaching triggering a number of tipping points, where the climate will heat more and more quickly, without our being able at that point to mitigate the problem, or even reasonably adapt to all the harms and losses. I suspect you have not read any of these reports, though they are free and easy to access on the IPCC website.

These reports have been provided by the experts selected from the global population of climate scientists. They have been warning of the dangers we face for the last 3 decades, The warning bells are ringing louder and louder, and we are now, many of us, experiencing the harms and dangers of climate change. The changing climate puts at risk everything that is irreplaceable, such as access to clean air and fresh water, food security, wildlife and biodiversity, human physical and mental health, to say nothing of things like land value along coastlines and waterways, international security (as climate refugees increases), access to insurance, many non-energy industries such as tourism, agriculture, fisheries, forestry, and so on.

Focusing on the lack of wealth from one replaceable industry, one that is the chief source of all of the substantial risks I've listed, and for which we now have many potential replacement options, is completely short-sighted and extremely selfish. If you think that Mr Kenney is a greater expert on climate science and its risks and costs than the global population of expert scientists, after reviewing the IPCC reports, as you should if you are going to throw around charges of ignorance, then you really are very wilfully gullible. Mr Kenney may have some types of strengths, but knowledge of and appreciation for science is clearly not one of them. When there is a near-universal consensus on a scientific matter from those most expert in interpreting and reporting it, it is incredibly irresponsible to our children and our planet to pretend as though this matter is debatable.

We can pitch in our money to help oil and gas workers find a new career. We can't pool our money to buy back extinct species, vanished glaciers, submerged coastlines, clean plentiful water, or pleasant livable temperatures.

So what you are saying is a

So what you are saying is a carbon tax IS THE ONLY SOLUTION to environmental protection? A carbon tax will not solve the problem. Pressuring those countries who are the largest polluters, china, india, the USA, as examples, into changing their environmental policies and actions by way of tariffs or boycotts would be a better start. Taxing canadians will not save the planet. Enforcing laws already in place, legislation regarding new industrial buildings, expansions or upgrades to adhere to stricter environmental impact regulations including emissions, water use & pollution and energy consumption would also be a better solution. "The businesses would just raise their prices" you might say, thats fine. At least those using those products would be the ones paying for pollution instead of punishing ALL canadians by forcing canadians to pay yet another tax that affects everyday living expenses not just fuel, and at the same time letting those largest industrial/commercial polluters off the hook for their far larger "carbon footprint". There are better ways of reducing canadas pollution and emissions levels than a tax.

I have to agree sebc. Not

I have to agree sebc. Not looking like UCP is showing a lot of leadership. The carbon tax... if the province has it, the province gets all the tax money. If the Feds put the tax on Alberta because Alberta won't put the tax on the money goes to Ottawa. It's a no brainer as to who should do the taxing because everyone is going to have to pay. But this shouldn't be on their agenda as long as these fires are out of control. Right now they should be trying to shore up inter provincial relationships and getting help. I wish the UPC luck, they are going to need it.

Facing constant "natural" disasters might be the only thing that might persuade Albertans that we so called "green zealots" are not the bad guys and that we need urgent action to mitigate these disasters before its too late.

... while emaciated whales wash up on the shores of the Pacific Coast

... as corporate bastards seek opportunities to drill for oil and gas at the expense of the extinction of 1 million species!

... I shop in a grocery store in Toronto that sells "organic" salmon in April 2019. Raised without hormones, anti-bacterials. But caged in a small pen with thousands of similar species with no room to swim and develop muscles and protein. Not organic!!!;;

Kenney is channeling the

Kenney is channeling the emperor Nero who fiddled while Rome burned..........

The global climate emergency isn't just expected to "increase the frequency and severity of wildfires," it already has.

The global climate emergency isn't just expected to "increase the frequency and severity of wildfires," it already has.