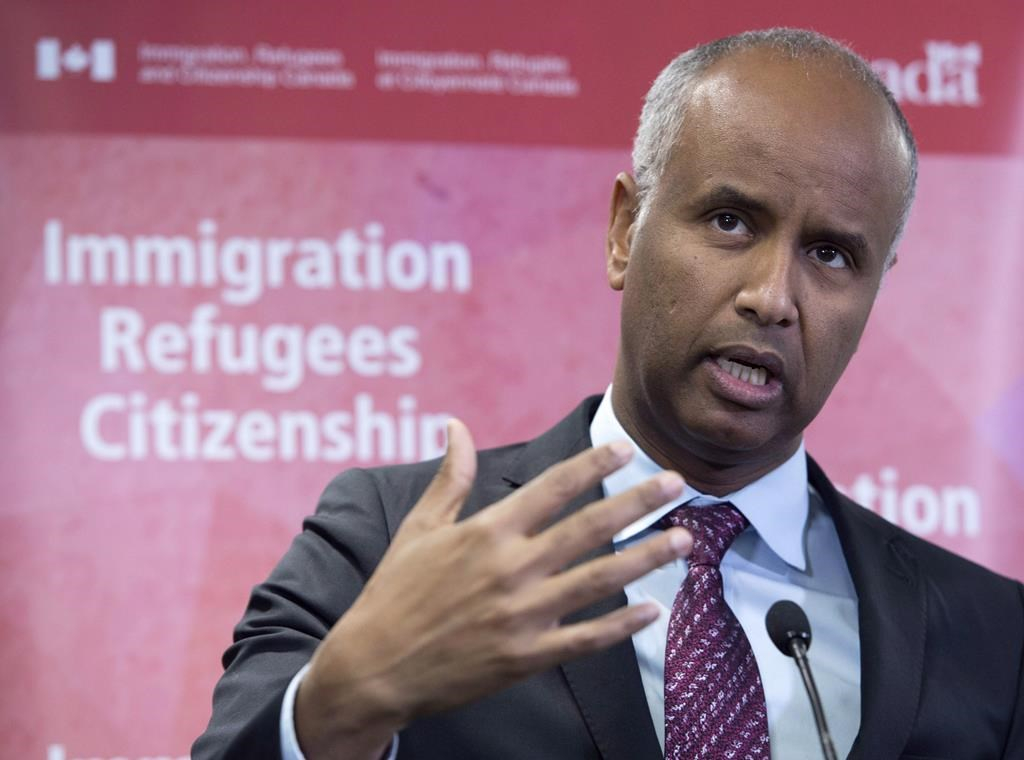 Minister of Immigration Ahmed Hussen makes an announcement of support for pre-arrival services at the YMCA in Toronto on January 14, 2019. File photo by The Canadian Press/Frank Gunn
Previous story

The Liberal government is rolling out several new measures to protect vulnerable migrant workers and immigrants living in Canada.

Starting next week, temporary foreign workers who find themselves in abusive job situations in Canada will be able to apply for open work permits, which will allow them to find other work in Canada.

This is meant to address a number of documented cases across the country of migrant workers facing labour exploitation, human-rights abuses and squalid housing situations.

Immigration Minister Ahmed Hussen said Friday that no worker should fear losing any chance at employment when they are being mistreated.

Earlier this month, the Migrant Workers Alliance for Change issued a policy document created by a national coalition of advocacy groups calling for open work permits to be granted to all migrant workers in Canada.

Closed work permits that tie workers to a single employer are a modern form of indentured labour, the alliance said, which bars migrant workers from the same rights to labour mobility as other newcomers in Canada. It also ensures only the needs of employers are met, at the expense of the workers' rights.

Syed Hussan, co-ordinator of the alliance, said while he is pleased to see the government offering open work permits for migrant workers who are being abused, many questions remain about how this policy will work in practice.

"Who defines abuse? Immigration officers are not trained in labour law, so will they be trained?" he said.

He also noted this will only apply to a certain segment of migrant workers — not all.

Ultimately, he believes it's a step in the right direction, but is calling for greater protections and rights for migrant workers.

"The solution must be permanent-resident status on arrival for all workers, not just open work permits for some after they have been abused."

Another new policy, which kicks in July 26, will allow newcomers experiencing family violence to apply for fee-exempt temporary-resident permits that will give them legal immigration status in Canada, which includes work permits and health-care coverage.

Hussen said this is being done to address safety concerns facing some newcomers who fear jeopardizing their immigration status more than they fear abusive spouses or partners.

In addition, the government is speeding up the process for newcomers who are victims of family violence to apply for permanent residency on humanitarian and compassionate grounds.

A third initiative will see a new two-year pilot that will allow anyone who failed to declare all family members when they first emigrated to Canada to sponsor those undeclared immediate-family members.

Currently, when a person applies to immigrate to Canada, they are required to declare all of their family members. It they don't, that person cannot sponsor that family member in the future.

The new rules for this pilot come into force Sept. 9.