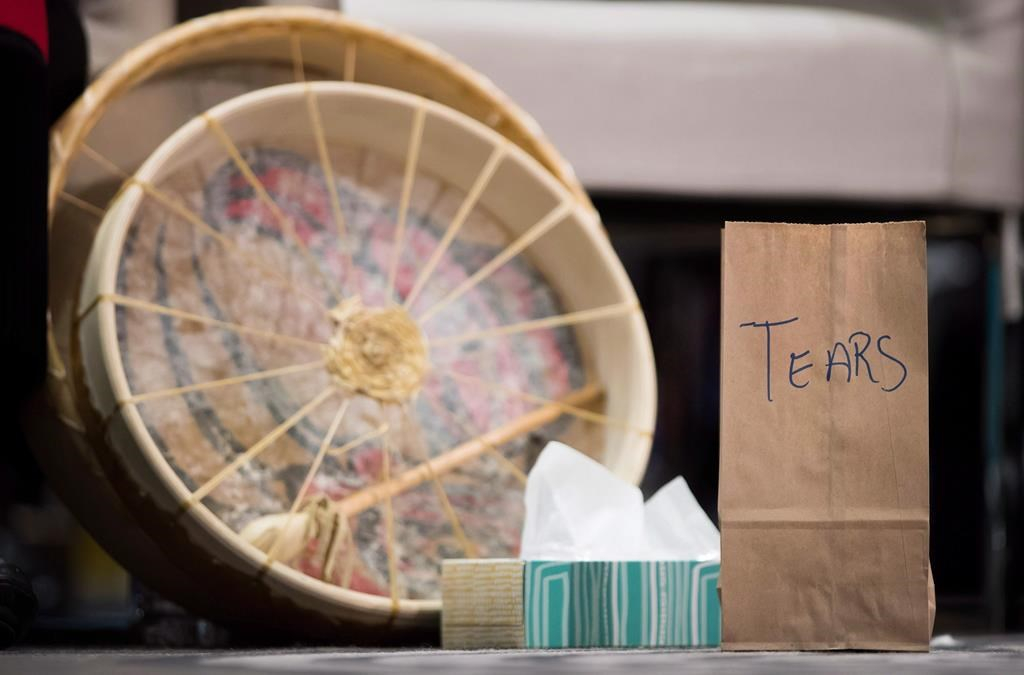 A paper bag used to collect the tears of those testifying, to then be burned in a sacred fire, is seen at the final day of hearings at the National Inquiry into MMIWG, in Richmond, B.C., on Apr. 8, 2018. File photo by The Canadian Press/Darryl Dyck
Previous story
Next story

The final report of a national inquiry into missing and murdered Indigenous women and girls is calling for broad and widespread changes to the way the justice system handles cases, including standardized response times, better communication with family members and strict protocols to ensure investigations are thorough and complete.

The report is scheduled for release Monday, but a leaked copy was obtained by The Canadian Press, as well as other media outlets. It's the result of a years-long inquiry into the systemic causes of violence against thousands of Indigenous women and girls in Canada, and includes — like the Truth and Reconciliation Commission into residential schools before it — a lengthy list of recommendations to address them.

Canadian society has shown an "appalling apathy" towards addressing the issue, say the inquiry's commissioners, who reach the explosive conclusion "that this amounts to genocide."

The report urges all actors in the justice system, including police services, to build respectful working relationships with Indigenous Peoples by "knowing, understanding, and respecting the people they are serving."

Actions should include reviewing and revising all policies, practices, and procedures to ensure service delivery that is culturally appropriate and reflects no bias or racism toward Indigenous Peoples, including victims and survivors of violence, says the report.

During the course of the inquiry, it notes, policing representatives acknowledged the "historic and ongoing harms" that continue to affect First Nations, Metis and Inuit families, as well as the need to make changes to how non-Indigenous and Indigenous police work to protect safety.

The office of Crown-Indigenous Relations Minister Carolyn Bennett declined to comment on the contents of the report until after Monday's ceremony.

"The commission will publicly present its findings and recommendations on June 3rd, and we very much look forward to that," Bennett's office said in a statement. "Out of respect for the independent national inquiry and the families, we won't comment on the details of the final report before then."

Families, however, are finally getting the answers they have been looking for after decades of demanding a national inquiry, the statement noted.

In an interview earlier this week, Bennett said the need to ensure families and survivors weren't let down has always weighed on her. She said the release of the final document will in no way mark the end of the journey.

"You can't hear the stories, you can't sit with them in ceremony without just knowing we have to prevent this," Bennett said. "This is too much hurt and the patterns were there for a long time. We just want to thank the people that started pushing."

Monday's formal release of the commission's findings is sure to be an emotional trial for the families of victims, survivors and advocacy organizations, who called for years for an inquiry to be conducted.

In 2005, the Native Women's Association of Canada created a database tracking cases, and it produced a 2010 report documenting 582 missing and murdered Indigenous women. In 2014, the RCMP released a national overview and pegged the number at nearly 1,200 between 1980 and 2012. Other estimates suggest the true number is far higher.

The inquiry report says that despite best efforts to gather information related to missing and murdered Indigenous women and girls, it concludes that "no one knows an exact number."

"Thousands of women's deaths or disappearances have likely gone unrecorded over the decades, and many families likely did not feel ready or safe to share with the national inquiry before our timelines required us to close registration," the report says.

It says, however, that one of the most telling pieces of information is the amount of people who talked about either their own experiences or their loved ones' publicly for the first time.

"Without a doubt there are many more," it says.

The office of Crown

The office of Crown-Indigenous Relations Minister Carolyn Bennett declined to comment on the contents of the report until after Monday's ceremony.
The silence of the lambs.