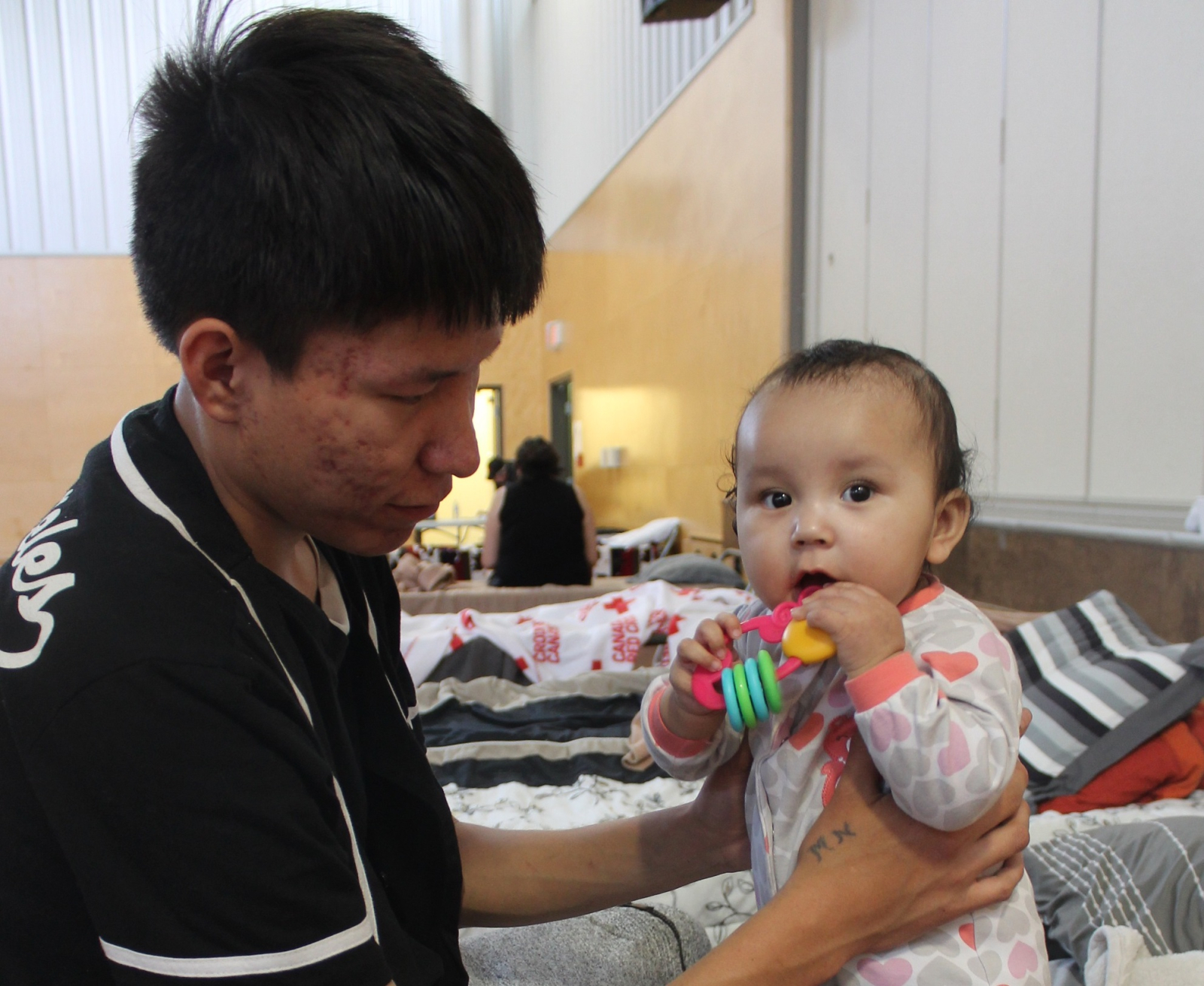 Nathaniel Wapahoo holds his eight-month-old daughter Brielle on the cot their sleeping on at the Calling Lake recreation centre in Alberta on June 2, 2019. Photo by Brandi Morin
Previous story
Next story

There were clear blue skies in the lakeside hamlet of Calling Lake where over 800 northern Alberta wildfire evacuees from Wabasca and Bigstone Cree Nation were staying on June 2. But, just a 45-minute drive northeast of there, access to Wabasca was closed off with fires burning nearby.

“Alberta Forestry built a fire wall then did backburning towards the fire. They’re trying to protect our community as best they can,” said Yellowknee, who is grateful that fires, burning less than 5 km away, didn’t reach Wabasca.

“No structures are damaged. Thank God it rained Saturday night and there’s a west to east wind which could blow the fire away from our community.”

When community members were first evacuated last Wednesday, Yellowknee and Marcel Auger, the reeve of the Municipal District of Opportunity, conducted a Facebook live session to help get the word out. Wabasca is located within Opportunity.

The encroaching danger caused some locals to panic and disburse to different locations like High Prairie, Slave Lake, Sherwood Park and Edmonton. The evacuee registration station was in Calling Lake where most members are staying at the recreation center, elementary school and camping out in tents where they can find space.

“People are lost, my phone has been going nuts,” said Yellowknee. “But I’ve asked people to pray. If we end up losing our prized possessions back home the one thing we can say is at least our kids are safe.”

The wildfires have become the latest symbol in Canada of the global climate emergency in a spring that has also seen devastating floods in Ontario, Quebec and Atlantic Canada.

“Sometimes you have lots of hope that you can start all over and everything will be ok. But other times it’s hard.” - @songstress28 speaks to survivors of the Alberta wildfires. #ClimateCrisis

It has also forced some changes to the political planning of Premier Kenney.

The premier was scheduled to stage a photo op last week at an Esso gas station in Edmonton on May 30 to celebrate the province's repeal of its tax on the carbon pollution which contributes to global heating. But Kenney was forced to cancel this event as toxic smoke enveloped the provincial capital, leading his office to announce that he would instead get briefed that day on impacts of the wildfires in his province.

Among them, Nathaniel Wapahoo, 18, from Bigstone Cree Nation.

Piles of donations of clothing, baby supplies and toiletries were laid out for evacuees such as Wapahoo, to access in facilities at Calling Lake, including the recreation center and a school

At the center, Wapahoo spoke briefly to National Observer, saying that his family was doing okay. They were sleeping on a cot along with other evacuees and feeling strange about having to stay there after fleeing their homes.

Big Stone elder Roy Cardinal jumped in his truck carrying a few clothes when he left home. He’s been evacuated due to wildfires several times before and said he’s not too worried.

Entire extended families are staying together and say they're being treated well by volunteers and aid workers.

Kim Mcleod grabbed a couple bins of her photos, important documents, and her pets when she left with her teenage daughters late Wednesday night. Leaving home was a blur. It was dark with black smoke and there were hundreds of vehicles ahead and behind in line to get out, she said.

“It was fast,” said Mcleod. “Your mind is not thinking straight. We got out within an hour. But we aren’t prepared to be here.”

Mcleod is staying with her children and mother-in-law in her camping trailer in the Calling Lake Provincial Park with her sister and children in a tent. She helps pass the time by volunteering at the recreation center but says she’s tired and more than ready to go home.

Three hours north of Wabasca the Paddle Prairie Métis Settlement has been devastated by the Chuckegg Creek wildfire burning near High Level. The tight knit community of less than 1,000 is about 75 km south of there. There were at least 15 homes burnt to the ground.

Angie Cardinal, her husband and three children were one of the last families to leave Paddle Prairie on May 26. They didn’t know just how serious the threat was and only took three changes of clothes each, a couple of blankets and one of their four dogs.

The family fled to a hotel in High Prairie and five days later got word that they had lost their home to the fire.

“It’s really emotional,” she said through tears via telephone to National Observer. “Sometimes you have lots of hope that you can start all over and everything will be ok. But other times it’s hard. But our strong community culture puts value on each other and not material things.”

Their beloved cat died in the fire and two of their dogs are accounted for. One is still missing.

Cardinal said her kids are holding up pretty good.

“My kids are very resilient people and I’ve raised them to be really positive. They’re strong human beings.”

Cardinal said although they have the support of their community, they feel overwhelmed knowing there are 14 other families in their position.

The situation has left some evacuees feeling as though the government is not prioritizing First Nations communities as it proceeds with its emergency response.

She added that she’s happy that the town of High Level was saved, but she wishes there were more resources available for the Métis community.

She also said that community leaders are hoping to get additional support from the federal government to help them with their recovery.

After the Alberta government announced it was lifting the evacuation order for High Level, Mackenzie County and Dene Tha’ First Nation on Monday, some people were expecting to return to their homes.

Cardinal is still absorbing the new reality of not having a home or belongings to return to. She said the family hasn’t decided what their next steps will be and is taking the situation one day at a time.