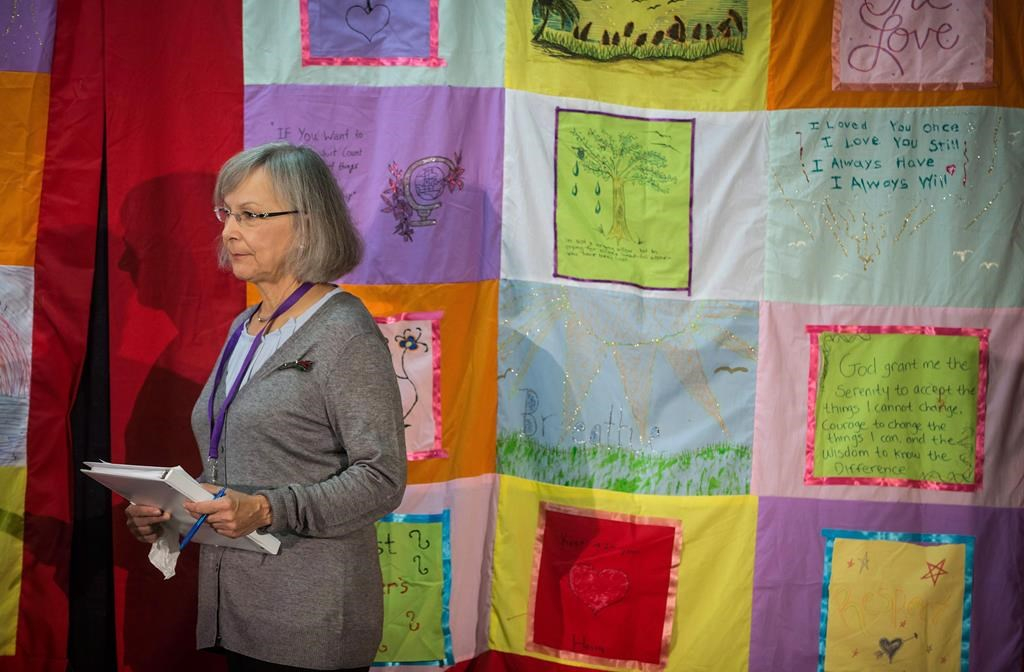 Chief commissioner Marion Buller listens before the start of hearings at the National Inquiry into Missing and Murdered Indigenous Women and Girls, in Smithers, B.C., on September 26, 2017. File photo by The Canadian Press/Darryl Dyck
Previous story
Next story

Geraldine Gauthier clutched a picture of her sister, Lynn, as she heard from the federally funded commission tasked with documenting the causes of violence against Indigenous women and girls.

Lynn was murdered 19 years ago. For Gauthier, the day was emotional and brought back many memories. But it was also filled with a touch of optimism now that 231 recommendations from the inquiry into missing and murdered Indigenous women and girls have been put on paper.

"They are going to hear what we have to say, first of all," she said. "It is a beginning and I hope it does bring change."

Speaking in the grand hall of the Canadian Museum of History, facing Parliament Hill across the Ottawa River, the inquiry's chief commissioner, Marion Buller, said that nothing short of an absolute paradigm-shift is in order from all levels of government and public institutions to address the issue — one her commission labelled frankly as a genocide.

The tragedy, Buller said, is a direct result of a "persistent and deliberate pattern of systemic racial and gendered human and Indigenous rights violations and abuses, perpetuated historically and maintained today by the Canadian state."

The term has instantly become a flashpoint, the subject of arguments over whether it denotes intentionality in the hundreds of killings and disappearances the inquiry examined, whether it's fair if it does, whether the label matters.

For his part, Prime Minister Justin Trudeau stopped short of using the term — despite being directly asked to do so in a call from the crowd — when he spoke after accepting the report.

Instead, Trudeau said violence against Indigenous women and girls is "not a relic of Canada's past," but part of its present, and the justice system has failed them.

"Time and again, we have heard of their disappearance, violence, or even death being labelled low priority or ignored," he said.

He received the report from the commissioners after they performed a traditional ceremony, including coating its pages with medicine.

In a speech later in Vancouver to a gender equality conference with numerous political leaders from around the world, Trudeau did use the term.

"Earlier this morning the national inquiry formally presented their final report in which they found that the tragic violence that Indigenous women and girls have experienced amounts to genocide."

The inquiry report itself uses the term "genocide" dozens of times, starting in the first paragraph of Buller's preface: "This report is about deliberate race, identity and gender-based genocide," she wrote.

After Monday's ceremony, Buller said the commission does not need to hear the word "genocide" out of Trudeau's mouth; it heard the truth from families and survivors. That Indigenous women and girls have been victims of genocide was an "inescapable conclusion" for the commission, she said.

When asked if she agreed with the use of the term, Crown-Indigenous Relations Minister Carolyn Bennett said the Liberal government accepts the findings of the commissioners, adding it has heard for a long time that "racism and sexism kills."

The federal government will leave the discussion of the use of the term "genocide" to academics and experts, said Justice Minister David Lametti. He said the government has a responsibility to the families and survivors to fix the problem.

Conservative Indigenous-affairs critic Cathy McLeod said the discussion around the term was a distraction from the value of the report's findings and would not say whether she agreed with the use of the word.

NDP Leader Jagmeet Singh said he thinks genocide is an accurate word to use for what he calls "a complete system failure" for Indigenous women and girls.

Monday, Buller told the crowd she and her three fellow commissioners are holding up a mirror to the country, reflecting what they heard from more than 2,300 people over two years of cross-country public hearings and work to gather evidence.

Commissioner Qajaq Robinson said the inquiry tested her to her core as a non-Indigenous person, struggling to come to terms with her "role in Canada's genocide."

"Shame, guilt, denial, that urge to say, 'No, no, no, that's not what this is,' " she said. "But it's the truth. It's our truth. It's my truth, it's your truth. The families, survivors, and Indigenous peoples across this country have brought this truth to light."

(Robinson was born and raised in Nunavut, speaks Inuktitut and practises Aboriginal law, but her appointment as a member of a commission that had no Inuk member was questioned when the inquiry began.)

The report's 231 recommendations — framed as "calls for justice" — include developing an effective response to human-trafficking cases and sexual exploitation and violence, including in the sex industry.

These moves are not optional, but constitute legal imperatives, the report says.

The report also focuses on a call for people in the justice system and in police services to acknowledge that the historical and current relationship with Indigenous women, girls, and two-spirit people has been largely defined by colonialism, racism, bias and discrimination.

Missing and murdered Indigenous women are believed to number in the thousands in Canada, but the report says that despite the commission's best efforts to quantify the extent of the tragedy, "no one knows an exact number."

In 2005, the Native Women's Association of Canada created a database tracking cases and produced a 2010 report documenting 582 missing and murdered Indigenous women. In 2014, the RCMP released a national overview and pegged the number of cases between 1980 and 2012 at nearly 1,200. Other unverified estimates are far higher.

Evelyne Youngchief, a survivor of violence who works on the front lines on the Downtown Eastside of Vancouver, said Monday the report may offer closure to some, but not her.

More and more Indigenous women continue to go missing and be murdered, she said.

"It's going to keep happening," she said. "It's not going to end any time soon. When are they going to stop murdering and taking our women?"

I believe the PM is being

I believe the PM is being disingenuous in claiming that the MMIW spate of violence is NOT a relic of Canada's past but a part of it's present - which is certainly true enough, but lethally, refuses to acknowledge that historical contacts between european invaders and the in situ indigenous peoples were stained by violent usurpation but might not have succeeded were it not for the epidemic introduction of european diseases, some of which were deliberatly spread.

It is false to claim that the past is not prologue to the present. It is also false to fail to acknowledge that past Canadian leaders made no secret of their intent to annihilate the indigenous savage, by extermination or forced assimilation. This, the official imprimatur, gave generations of license to white Canadians to abuse, defraud, destroy indigenous society and opened the season on human hunting of the "savage native". Such indoctrination which persists to this day is the proximate cause of the continuing mind set among some whites, that the "natives have to go".
How can we achieve reconciliation when the majority of european Canadians, still cannot accept the indigenous as humans of equal value?

When I get my hands on the

When I get my hands on the report, perhaps my question might be answered. Until then, I have heard that at least one of the recommendations deals with changes proposed for the Indian Act. I would like to know if there is any mention of DELETING that disgusting act altogether!
Like so many refreshing actions, documents, and new information coming out these days, the Green New Deal of the North included, this report proves that we are all ALL guilty if we
do nothing to carry out the required paradigm shift in how we behold indigenous - and ALL - people!