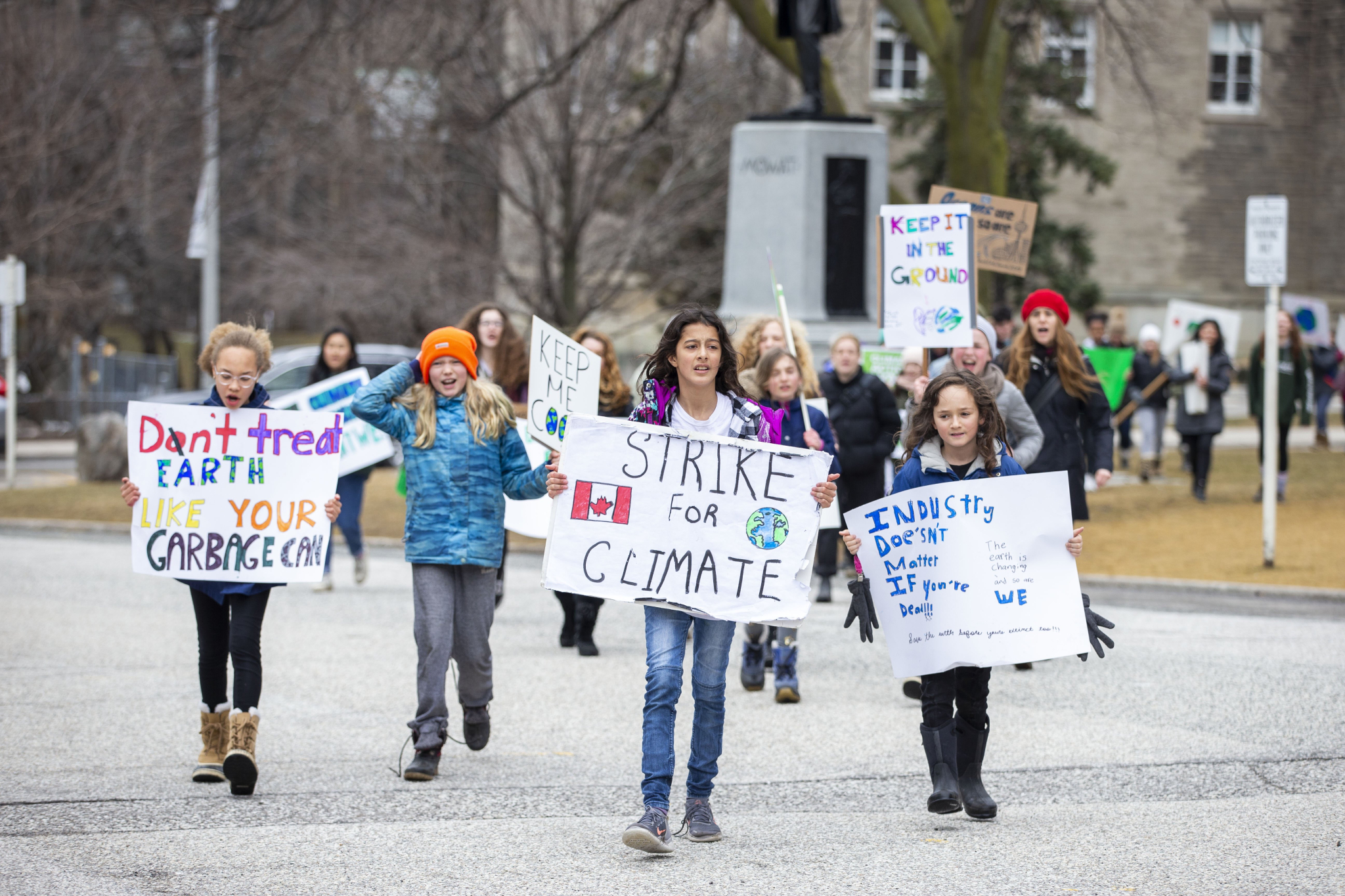 Canadian students take to the streets in Toronto on March 15, 2019 as part of a global student strike to pressure governments to take serious action to address climate change. File photo by Carlos Osorio
Previous story
Next story

I was there at #FridaysForFuture climate strikes in Toronto on March 15th, May 3rd and May 24th, inspired and remotely supported by my mentors and peers who attended at the same time in Europe.

Seeing pictures of their science-themed signs and speeches by professors on social media helped me to have the courage to make my own climate science sign and join the youth. There were a few scientists at the Toronto climate strikes but not enough to show the youth strong support for their science-based demands. So, where were they?

The international movement of youth striking for climate action was inspired by Swedish student Greta Thunberg who started striking from school on Fridays in August 2018 to demand bold climate action from the leaders of her country.

In the leadup to the March 15 global climate strike, more than 26,000 scientists in Austria, Germany and Switzerland signed a statement of support for youth school strikes and shared their support with the hashtag #Scientists4Future. Similar letters circulated in other countries and an international letter was published in Science Magazine.

The truth is hard to ignore

A letter was recently started in Canada, too, by Evidence for Democracy, but compared to other countries the science community in Canada is surprisingly slow in showing their support for the climate action the youth are demanding. As a scientist, this is both surprising and frustrating to see.

It is time to show young Canadians that Canadian scientists are standing behind them, writes UofT scientist @ellengute. #Scientists4Future #climatestrike #Fridaysforfuture

We have known the facts about climate change for decades, and several national and international reports released in recent months have reminded us of these facts and highlighted the urgency to act. Canada’s Changing Climate Report, for example, made the truth hard to ignore.

The reports summarize thousands of research studies and the youth leading the climate strikes are simply demanding that their leaders and the adults, who have the right to vote, take these facts and act accordingly to avoid the worst consequences of the climate crisis.

So many of us are frustrated and depressed by the facts we know about the changing climate, how it will impact us and our kids, especially if inaction continues, which will lead to the worst climate scenarios coming true. But as scientists, we are leaders too, and we are responsible for communicating our science and its value to society. When the German letter was sent around the science community to sign, I was incredibly happy to see so many of my mentors and collaborators had already signed. It was my trust in their expertise that gave me the final push I needed to support the Scientists4Future movement and their supporting letter for the youth strike. I know we can do the same here in Canada, if we, as experts, follow the students’ lead and set an example for our peers.

Many signatories of the letters in other countries and the international letter are leaders in their fields of research and often collaborators and co-authors of Canadian researchers. They have already voiced their support for the youth striking for climate, and we should stand with them. In this historic situation, everyone is needed to change the route we are currently on and avert the worst climate change consequences. We still can change the trajectory, but time is running out fast.

The facts are clear – we must respond now to the climate crisis. As scientists, we must support the youth, not only by signing letters but also by showing up to stand with them at the strikes, and by making our expertise accessible to them. Many of us are excellent science communicators, already engaged to increase the interest of youth in the sciences. Why don’t we all meet on Fridays, share our excitement for science and stand behind the facts our educational and research system has uncovered to support the youth in their demands for a viable future? As Greta Thunberg asks: “...What is the point of learning facts in the school system when the most important facts given by the finest science of that same school system clearly means nothing to our politicians and our society?”

While initiatives and activities ramp up worldwide in the leadup to a big climate strike Sept. 20, 2019, it is time to show young Canadians that Canadian scientists are standing behind them and that their demands are based on profound science.

Ellen Gute is a PhD Candidate at the University of Toronto, where she investigates ice forming processes in clouds. She's been an active supporter of the youth climate strikes, organizing her UofT peers to attend the strikes as Scientists4Future.

By Jonathan Watts | News, Energy, Politics | March 11th 2019
Reports from the Race to a Safer World

Good for you Ellen Gute!!!

Good for you Ellen Gute!!! And how about other people who want their children and grandchildren to be certain to have a life? I am in a wheelchair myself, but most people aren't. I wish these kids could vote! and we've got to do what we can to actually reduce CO2, whatever way we can.

The XR movement is growing

The XR movement is growing and older citizens can show support. Another youth-led story in Nat Observer is inspiring as well, the creation of a new website: https://www.shakeuptheestab.org/
Go have a look.