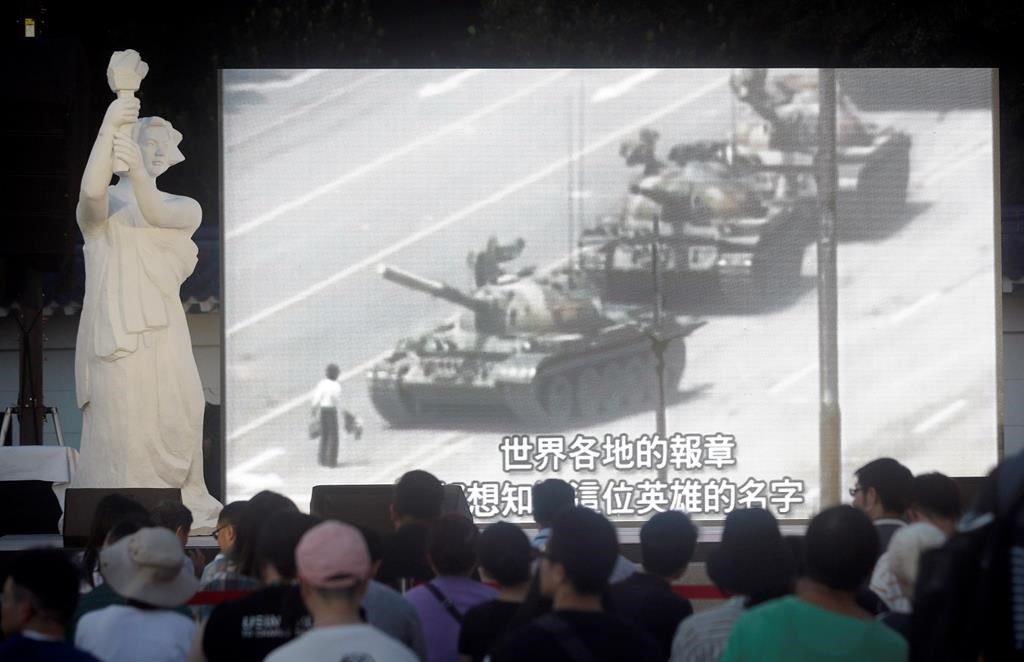 People watch a giant screen as they attend the Tiananmen Anniversary at Democracy Square in Taipei, Taiwan, on Tuesday, June 4, 2019. Photo by The Associated Press/Chiang Ying-ying
Previous story
Next story

Beijing's top diplomat to Canada blasted the Trudeau government for "grossly" violating China's internal affairs Tuesday after a statement singled out his country's treatment of ethnic Muslim minorities on the 30th anniversary of the Tiananmen Square massacre.

Lu's admonishment came as the Liberal government appeared to be walking a fine line between acknowledging the historic massacre and its ongoing effort to win the release of two Canadian men imprisoned in China.

Prime Minister Justin Trudeau cautiously marked Tuesday's anniversary, but took the opportunity to note the repression of an estimated one million ethnic Uighurs in Xinjiang province.

"We continue to call on China to respect human rights, to respect the right to protest, to respect freedom of expression, to cease its actions against minorities like the Uighurs in western China," Trudeau said when asked about the anniversary during an event in Vancouver.

"We have real concerns about China's behaviour in regards to human rights and we'll continue to advocate — both directly with Chinese leadership, as I have every time I have sat down with them, and indirectly with our allies — for better respect of human rights on this anniversary and every day going forward."

The Muslim Uighurs and other minorities are believed to be held in Chinese internment camps, which has sparked criticism from the United States and the United Nations. China denies the existence of the camps but says it is offering voluntary skills training to prevent religious extremism.

Relations with China are at an all-time low following the arrests of Michael Kovrig and Michael Spavor, who were detained in December at the height of the controversy surrounding Huawei executive Meng Wanzhou before being formally arrested last month on allegations of espionage.

The pair are being held without access to lawyers and receive consular visits only about once a month. Ottawa's calls for their immediate release have prompted angry dismissals and admonishments from Beijing.

Foreign Affairs Minister Chrystia Freeland followed Trudeau's comment with a formal statement — well after most of Canada's major allies had weighed in — that said Canada was joining with the international community in "commemorating the 30th anniversary of the violent crackdown against unarmed and peaceful citizens" in and around Beijing on June 4, 1989.

"Canada asks Chinese authorities to break the silence on these events by openly accounting for the Chinese citizens who were killed, detained or went missing," Freeland said, while not explicitly naming Kovrig and Spavor.

"Thirty years later, the struggle for basic freedoms continues for human rights defenders in China, including lawyers and journalists. We call upon China to uphold all of its human-rights obligations and for the release of those who have been unjustly and arbitrarily detained."

The government has routinely branded the incarceration of Kovrig and Spavor as arbitrary. The pair continues to languish in Chinese custody what is widely viewed as retribution for Canada's arrest last December of Meng, Huawei's chief financial officer and the daughter of the company's founder, on an extradition request by the U.S.

"I think that Ms. Freeland and the government have a big challenge in front of them," former Progressive Conservative prime minister Brian Mulroney told The Canadian Press on Tuesday. "I think that we cannot sit quietly by and allow Canada's interests to be either neglected or demonized. This thing has to be dealt with."

Mulroney was Canada's leader during the Tiananmen Square massacre, which forced a rethink on engagement with an emerging China. "And all of a sudden this happened. It was cataclysmic in foreign affairs."

"We urge the Chinese government to make a full, public accounting of those killed or missing to give comfort to the many victims of this dark chapter of history," Pompeo said in a statement Monday.

Mogherini called for the release of human rights defenders and lawyers now in custody in relation to the June 1989 events, saying it "is important for future generations and for the collective memory."

Liberal Sen. Jim Munson, who covered the massacre in Beijing as a CTV television journalist, said he is immensely troubled by "the erasing of history in China by the Chinese government."

"If you are aware, you have been fed a government line through a school system or a government propaganda that this had to be done. Well, no government has to kill its own people."

Lu made no apologies for the use of force by the Chinese military against unarmed protesters.

The Chinese government "has already come to a clear conclusion on the political disturbance in the late 1980s," he explained through a translator at the Chinese embassy in Ottawa.

"The great achievements we have made in the past 70 years since the establishment of People's Republic of China have spoken volumes that we chose the right development path, and it is endorsed by our people.

"The Chinese people will continue to advance along the path of socialism with Chinese characteristics."