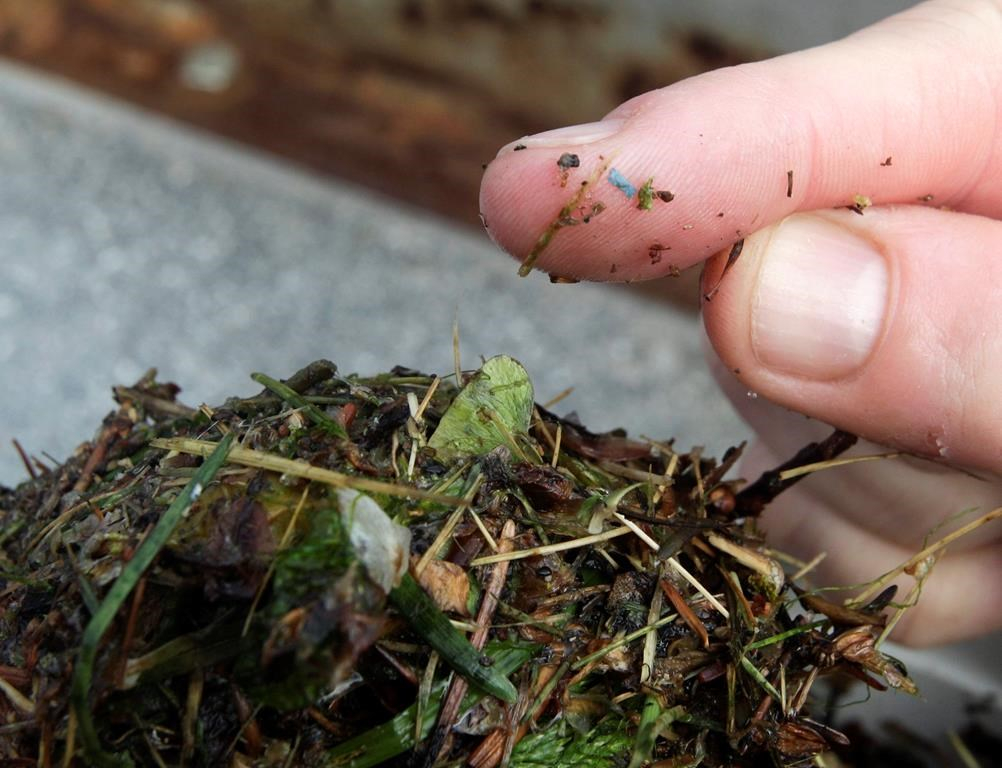 A blue rectangular piece of microplastic is visible on a researcher's finger on Wednesday, May 19, 2010 in Tacoma, Wash. File photo by The Associated Press/Ted S. Warren
Previous story
Next story

University of Victoria biologist Kieran Cox, whose paper was published Wednesday, says what his study shows most clearly is how little is known about the extent or impact of microplastics in people.

"The last thing I want to do is cause some sort of undue alarm over plastics," he said.

"But even if we're considering what I would call a pretty limited literature, we're getting into hundreds of thousands (of particles) a year. That's a non-trivial dose."

Microplastics range in size from microscopic to a grain of rice. They are produced when plastic items of all kinds break down in the environment.

The subject of a growing body of research, they have been detected in oceans, on land and in air. Cox's study is one of the first to try to estimate their presence in humans.

"If you tell people more facts surrounding microplastics in the ocean, they don't seem perturbed by it," he said. "But if you tell them there's a small piece of plastic in their food, they're really connected to that."

Cox and his colleagues began by tracking down every study they could that estimated the plastics load in commonly consumed items of food and drink. Although they found nothing on meat and vegetables, they found 26 studies on fish, shellfish, sugar additives, salts and beer as well as on bottled and tap water.

They estimated how much of those items would be consumed by an average North American following something close to American food guidelines.

The calcuated plastics dose those food items were introducing was between 39,000 to 52,000 microplastics particles a year into every individual. Female children were at the low end; adult males were at the high.

The totals could be higher. Someone who drinks mostly bottled water could be gulping down an extra 90,000 pieces yearly.

Nor does that include microplastics in air. Breathing introduces another 35,000 to 69,000 particles.

And because that estimate only includes about 15 per cent of average caloric intake, Cox said it's likely to be conservative.

"I would say the likelihood that it's an underestimate of your total consumption over the year is pretty high."

Cox didn't find any studies on microplastics in meats, fruits, vegetables or alcoholic drinks except beer. The pathways into food and humans are varied and ill-understood, he said.

"You can think about the middle of the grocery store — you walk through all those middle aisles and the vast majority of those items are going to be wrapped in plastic. Everyone can take a survey of their day and think about the items that they're consuming that have a lot of plastic in them."

The health impacts of microplastics are also mysterious.

Some plastics — BPA, for example, which disrupts endocrine function — are harmful in themselves. There is also evidence they can carry other toxins. Many particles are small enough to pass through cell membranes.

It calls out for more research, Cox said.

"We have this dose. What does it mean?"

Another reason to treat the

Another reason to treat the move away from hydrocarbons as an urgent priority. It will be interesting to watch the reaction of this industry that produces these plastics. Will they work to ensure mainstream media discusses it as little as possible it? Or will it be the tobacco industry gambit: delay meaningful action for many years, until there is "clear proof" of a problem for humans?