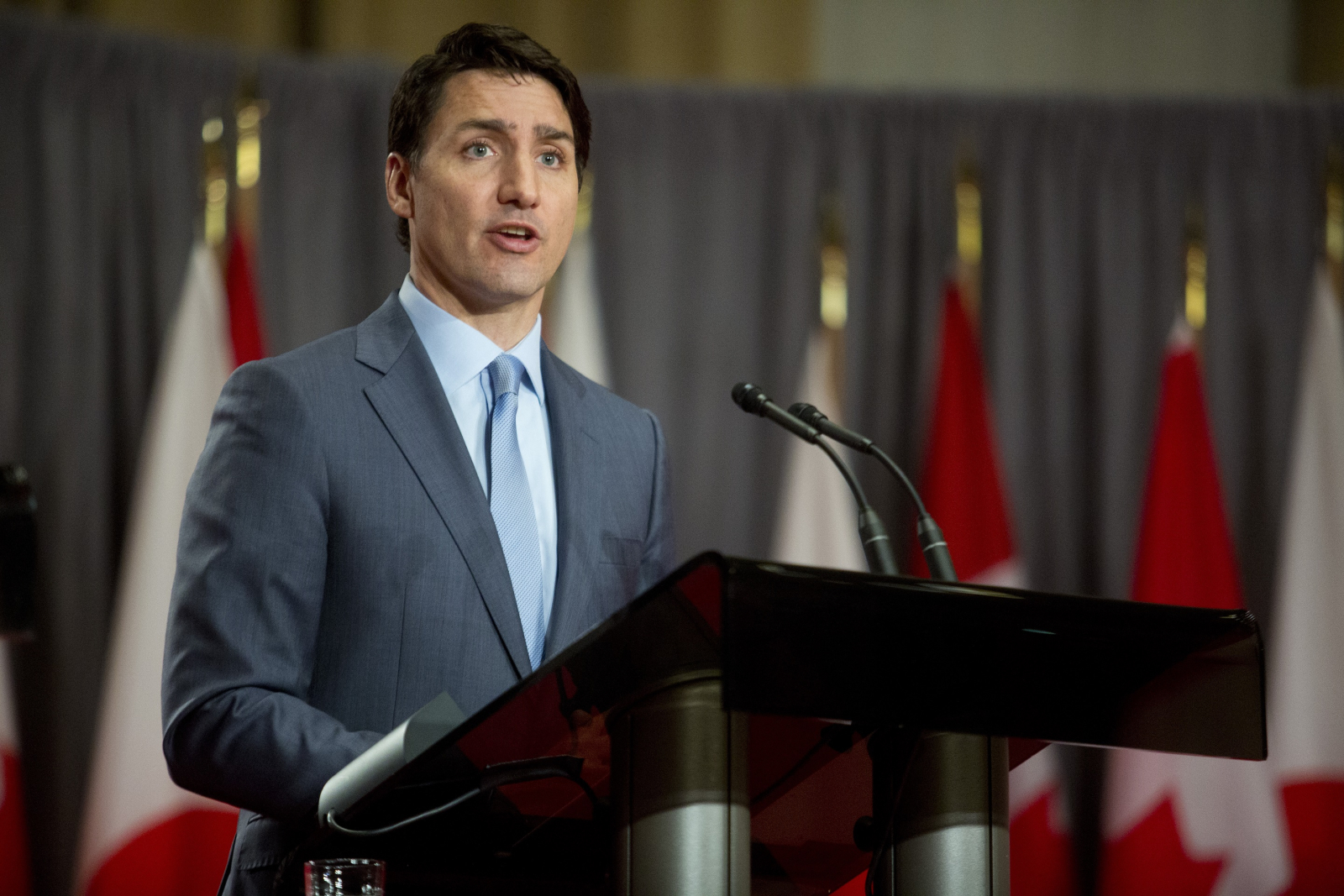 Prime Minister Justin Trudeau said Monday that moving forward on banning 'toxic single-use plastics' by 2021 is something Canadians expect — and expect to be done right. Photo by Andrew Meade
Previous story
Next story

Plastic bottle manufacturers may be required to pay for recycling programs as part of a new Trudeau government plan that would ban single-use plastics in Canada, cut carbon pollution and create tens of thousands of jobs.

Prime Minister Justin Trudeau said Monday morning he wants to move toward a countrywide system that bans plastic products meant to be used once and then thrown out, while at the same time making plastic producers pay for the cost of recycling the waste their products create.

"We are moving forward on banning toxic single-use plastics by 2021. This is something that Canadians expect, they expect it to be done right, and that’s exactly what we’re doing," Trudeau told media in Mont-Saint-Hilaire, Que., east of Montreal.

The plan would ban products including some plastic water bottles, straws, plates, cutlery, bags and stir sticks. At the last G7 summit, Canada and other countries signed a charter promising to phase out single-use plastic by 2040.

It's meant to cut down on plastics polluting the oceans at about a truckload a minute, killing or injuring a million birds and more than 100,000 sea mammals, including whales, dolphins, seals and sea turtles, each year

Plastic waste also accumulates in giant floating garbage piles in the middle of the oceans, including one in the Pacific twice the size of Texas.

Trudeau's move comes 10 days after Canada's New Democratic Party promised to ban single-use plastics across the country by 2022 as part of its environmental platform, released May 31.

The NDP also said it wants to develop legislation "that holds companies responsible for the entire life cycle of their plastics products and packaging."

In parallel with the proposed ban, the federal government said Monday it will also work with provinces and territories to impose new "standards and targets" on plastics manufacturers or firms that sell items with plastic packaging.

Those new rules would require producers to collect the plastic waste from their own products and packaging and pay for it to be recycled. The idea is to incentivize firms to redesign these products to make them more sustainable.

British Columbia requires producers, sellers and importers of blue-bin products to pay for recycling under a law in place since 2014. Trudeau argued the province faces "challenges because it’s just one jurisdiction within a larger country."

Recycling programs differ across jurisdictions in Canada, and bottle manufacturers use a variety of different techniques, including different plastics or different combinations of materials that vary in terms of recyclability.

"That's why moving forward on a national level will oblige manufacturers to think differently about what products they use," the prime minister said.

Single-use plastics take five seconds to produce, five minutes to use, and up to five centuries to decompose. That's concerning for our environment and our wildlife. Across the country, more and more Canadians are stepping up to #BeatPlasticPollution — and we're joining them. pic.twitter.com/GtQunUSSV3

Less than 10 per cent of used plastic gets recycled

The circular economy means a system where plastics are made from renewable resources, in factories powered by renewable energy, and the products made are reused or recycled instead of used once or twice and then thrown out.

That's not remotely the case in Canada today, despite the fact many Canadians dutifully put their plastic containers into recycling bins each week. In reality, less than 10 per cent of plastic used in the country actually gets recycled. Instead, Canadians throw out more than three million tonnes of plastic each year.

Part of the reason so much plastic gets thrown out is that about a third of the plastic used in Canada is for single-use purposes. The plastic containers that hold takeout food, for example, or the plastic straws or cutlery that come with them, are typically thrown out when the person is done eating.

Another is that producing new plastic is cheaper and easier than recycling, according to an analysis by Deloitte and ChemInfo Services commissioned by Environment and Climate Change Canada.

The analysis said the plastics-manufacturing industry in Canada was worth $35 billion in 2017 and supported roughly 93,000 jobs, far larger than the recycling industry, which was worth about $350 million and employed about 500 people.

Vito Buonsante, plastics program manager at Environmental Defence, said the move should be seen as the first step in addressing how landfills are filling up, animals are being killed and waterways are being choked.

"It is extremely promising to see the government committing to a comprehensive plan that can make a difference. Canada is not only banning the most problematic products, but also holding producers responsible for cleaning up the waste they create," he said in a statement.

"What we need now is swift implementation."

Environmental Defence is calling for plastics to be recognized as harmful under the Canadian Environmental Protection Act, so regulations can be developed to ensure widespread bans and recycled-content requirements in products. It wants to see 100 per cent recycling of plastics by 2030.

Buonsante said he expected the "plastics industry will be doing everything in their power to water down these regulations, limit the ban list and lower the collection targets."

Plastic bottles are one of the most-recycled products in Canada & recovery rate is increasing https://t.co/6WZDPPFkPO #RecycleEverywhere

'Large companies' will be 'made responsible'

Trudeau had the larger industry players in mind when he made his announcement Monday morning in Quebec.

"We recognize that it is the large companies — the Coca-Cola Bottling Co.’s, the Unilevers — that will be, and are always, the most significant contributors to plastics around us, that will be made responsible for the full life cycle of the products they sell to consumers," Trudeau said.

He called his plan a "shift away from municipal responsibilities to corporate responsibilities." The government said the combination of actions will create approximately 42,000 jobs, reduce 1.8 million tonnes of carbon pollution and "generate billions of dollars in revenue."

The move would also cut down on waste and ensure Canada can "stay competitive with a world that is increasingly moving toward reducing pollution and being stronger in terms of environmental protection," Trudeau said.

Unilever has already said its plastic packaging will be "fully reusable, recyclable or compostable by 2025." It is part of the Circular Economy Leadership Coalition, a non-profit alliance of NGOs, think tanks and corporations endorsing the concept of taking waste out of the manufacturing process.

The Canadian Beverage Association, which represents juice, water and pop bottlers, added it was "pleased" Trudeau "highlighted that industry-led recycling programs are the most effective way to collect and recycle plastic beverage containers."

But t​​he CFIB wants the federal government to carry out consultations and an economic impact assessment before it puts the full plastics ban in place, president Dan Kelly said.

"It would be irresponsible to put such a sweeping measure into place without fully studying the possible impacts on Canada's small businesses first," Kelly said in a statement. "Today's announcement raises a lot of questions for small businesses."

Restaurants and retailers using single-use plastics, as well as small businesses that produce these products, will have to find alternative products quickly, Kelly said. "If done hastily, this policy could add a whole lot of new red tape to their plates."

He noted the government is seeing the shift as "an opportunity for entrepreneurs and startups to get involved in a new area," as much as a way to give clarity to businesses.

The list of specific plastics that will be banned will be established "over the coming months and year," the prime minister said. Details as to how the federal government will negotiate with businesses, the provinces and territories is also still to come.

In that, DU and DFA pioneered: we got Canadian garbage sent back with the help of the Canadian government. I did not talk; I quietly withdrew our diplomats and got full Canadian cooperation for plastic change. Thanks UK Ambassador Holmes for the round-the-clock attention. https://t.co/XtIoe42Fzp

'You need to take back your rubbish'

As unrecycled plastic builds up in Canada, shippers have been seeking a home for the country's plastic offshore. Some of it has ended up in Southeast Asian locations. The governments there are not happy about accepting containers full of waste.

Canada and the Philippines are now normalizing relations again after a months-long diplomatic battle where President Rodrigo Duterte said he would "declare war" on Canada over the waste. His government restricted official travel to Canada and interactions with Canadian officials, and recalled diplomats.

Malaysia, as well, has declared Canada’s plastic waste exports "irresponsible" and stated its plan to ship Canadian exports back to Canada.

The complaints from Malaysia and the Philippines threaten to undermine the reputation Trudeau has tried to build when it comes to dealing with plastic waste.

Canada made plastics a central aspect of its G7 presidency, for example, culminating in the Ocean Plastics Charter, which now counts 20 countries plus the European Union, although notably missing are Japan and the United States.

Federal, provincial and territorial environment ministers also developed a countrywide Strategy on Zero Plastic Waste, which includes working with plastics manufacturers and bottlers to "shift responsibility to them."

Finally, the Trudeau government banned plastic microbeads, or tiny amounts of plastic found in products such as body washes, toothpaste, skin cleansers and other toiletries.

Manufacturing and importing these kinds of toiletries has been banned as of July 1 last year; other natural health products and non-prescription drugs were given an extended deadline to July 1, 2019.

North Americans eat, drink and inhale tens of thousands of plastic particles every year, according to University of Victoria biologist Kieran Cox, depending on the products they use and where they live. Microplastics are found everywhere, from the inside of water bottles to the air Canadians breathe.

Philippines lifts Canadian travel ban but no return of ambassador yet

Corporate Canada’s lethargy towards protecting Canada’s environment reminds me of a certain weight loss clinic’s catchphrase, “I you could do it alone, you would have done it already.”

Yeah, we may have a pipeline

Yeah, we may have a pipeline to get dilbit to China where all the plastic stuff is manufactured and we may have hundreds of super tankers on our coastline which we have no idea who the shipping companies, their standards, environmental history or quality of ships are, BUT we won’t have plastic straws! Do we feel better Canada? What a crock! But people will vote for it because they think the price of gas is connected to the lack pipelines. But they’ll feel good because won’t use a plastic straw, (2021) ....maybe. WAKE UP!

while bottle makers could

while bottle makers could "pay under federal plan" we all know that any added cost to the bottle makers will be passed along to the consumer. Amen to that brother.