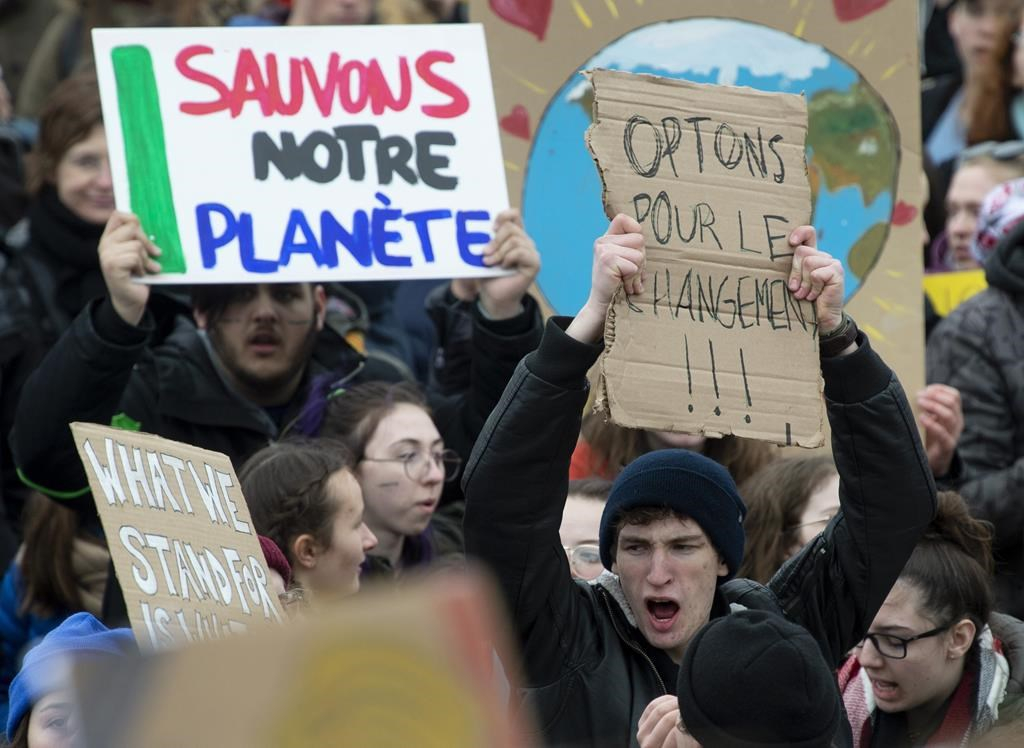 Students gather on Parliament Hill as they protest climate change, on Friday March 15, 2019 in Ottawa. File photo by The Canadian Press/Adrian Wyld
Previous story
Next story

Climate change can seem like a problem too vast for everyday people to influence, but research using computer models suggests that public attitudes and social learning can have a measurable impact on global warming.

"It feels like it's a bit of a hopeful study, in that it is possible for this change to happen," said Madhur Anand of the University of Guelph. "It's a big challenge and a lot of things have to change."

Mathematical models of how climate responds to different levels of greenhouse gases are a mainstay of climate science. Those models, however, don't take into account how humans respond to those changes.

That's a potential feedback left out of calculations.

Anand and her colleagues are among the first to try to bring human behaviour into climate change projections.

Their model was adapted from previous work in the social sciences and simplifies what are complex processes. Anand said it reveals how different factors shape behaviour.

"That's something you can do in a model," she said. "You change each parameter one at a time, or in tandem, and then you can look and see ... some things really affect ... the temperatures and some don't as much."

The model assumes that people learn from each other and change their behaviour accordingly. The rate of behaviour change depends on the rate of "social learning" — the number and kind of public interactions people have on an issue — as well as on social norms, perceived risk and costs to avoid that risk.

None of those factors makes enough of a difference on its own, said Anand.

"We found that we need a combination of different social processes coming together to help mitigate climate change."

Discussions that lay out the causes and risks of climate change are needed, but social learning on its own doesn't seem to be enough to reduce carbon emissions. The cost of those behaviours also has to be reduced, the model suggests.

"These are things like carbon tax breaks or green technologies being developed that are more affordable," Anand said.

"Once the rate of social learning is high and you have a lot of people aware of the problem, that is the right timing to get those sorts of things spreading rapidly throughout the population and for it to actually have an effect, ultimately, on climate change."

"If you look at a lot of the major changes we've had in society, it was almost never because of some governmental policy or some taxation or some penalty," Anand said.

That's when the real results occur. The model suggests that if all the social elements are functioning and factored into climate projections, it's increasingly possible to limit global warming to the 1.5 degrees recommended by the Intergovernmental Panel on Climate Change.

"We really do need to have things like media coverage. Those (climate) marches are useful."

"Policy tends to be a very slow process, but I think we need to respond more quickly and with a larger variety of cost-reduction strategies.

"We don't actually have a lot of time."

Humans are causing climate change, but those who disagree welcome in UCP: Kenney