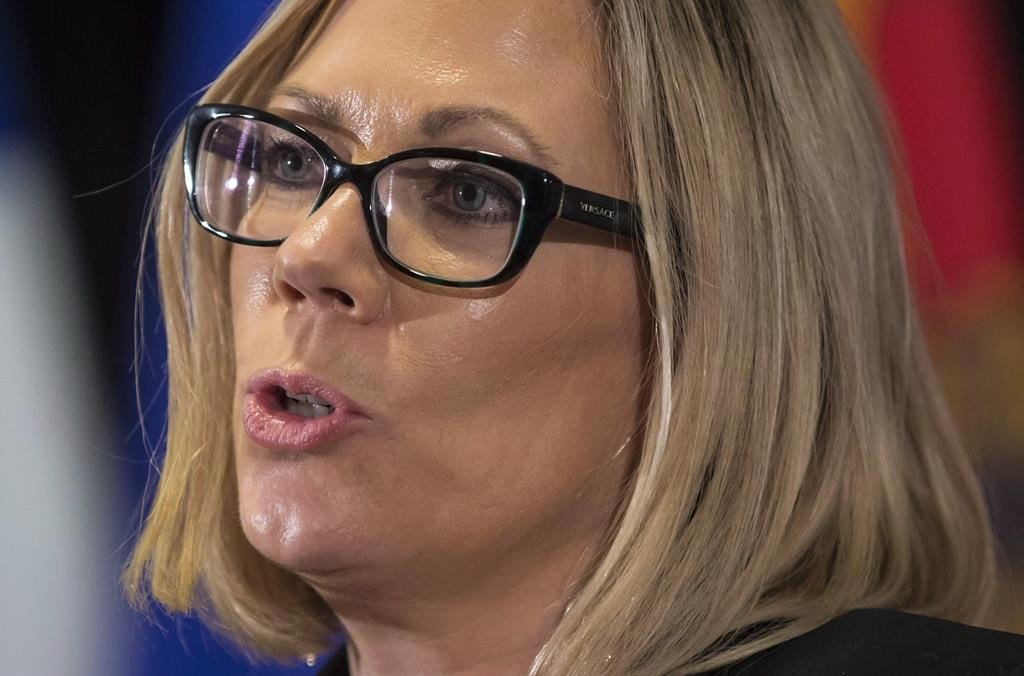 Manitoba Environment Minister Rochelle Squires responds to a question during a news conference after a Canadian Council of Ministers of the Environment meeting in Vancouver on Friday, November 3, 2017. File photo by The Canadian Press/Darryl Dyck
Previous story
Next story

The Manitoba government is watering down its target for reducing greenhouse gas emissions and removing any possible carbon tax from the equation.

Sustainable Development Minister Rochelle Squires announced Monday that the Progressive Conservative government is aiming to reduce annual emissions by one megatonne of carbon dioxide equivalent between 2018 and 2022.

That's less than half the almost 2 1/2-megatonne reduction target the Tories originally announced in 2017.

The main reason for the change is that the province is no longer assuming a carbon tax will be around.

"We've removed the carbon-pricing element from our plan and are moving forward with getting real emissions reductions," Squires told The Canadian Press on Monday.

"(There are) several more initiatives to come that will help us transition to a low-carbon future without imposing a tax on Manitobans."

"Reducing the emissions targets will not protect the environment in the way that we need to for the next generation," Kinew said.

"And it seems like the government, in this announcement, is also agreeing that putting a price on pollution is an effective way to reduce emissions."

The Tory government proposed a flat $25 per tonne carbon tax in its 2017 plan — an increase that works out to just over five cents a litre on gasoline.

The federal government said that was not high enough and insisted the province match the federal level that starts at $20 a tonne and is to rise to $50 by 2022.

Manitoba backed off its tax plan entirely last year, so Ottawa imposed its own levy in April. It has also done so in Saskatchewan, Ontario and New Brunswick, which also refused to meet the federal demand.

The future of the federal tax is in question. Conservative Leader Andrew Scheer has promised to scrap it if his party is elected this fall. Manitoba, Saskatchewan, and Ontario are fighting the tax in court.

Saskatchewan's Court of Appeal ruled in a split decision last month that the tax is constitutional. The province is appealing that ruling to the Supreme Court of Canada.

Squires said the Manitoba government is establishing firm, achievable targets and will meet them through initiatives such as a plan she announced Monday to subsidize the trucking industry for purchases of energy-efficient equipment.

The previous NDP government set emissions targets and failed to reach them — a fact highlighted by the province's auditor general in 2017.

Kinew has promised to make the province carbon-neutral by 2050 if he is elected premier. He has also said he would impose a price on carbon which, like the federal one, would be at least partially offset by rebates.

He is not yet prepared to say what that price would be.

"We will have to look at the federal landscape. We want to get a good deal for Manitobans that balances the environment but also keeping life affordable for people," Kinew said.