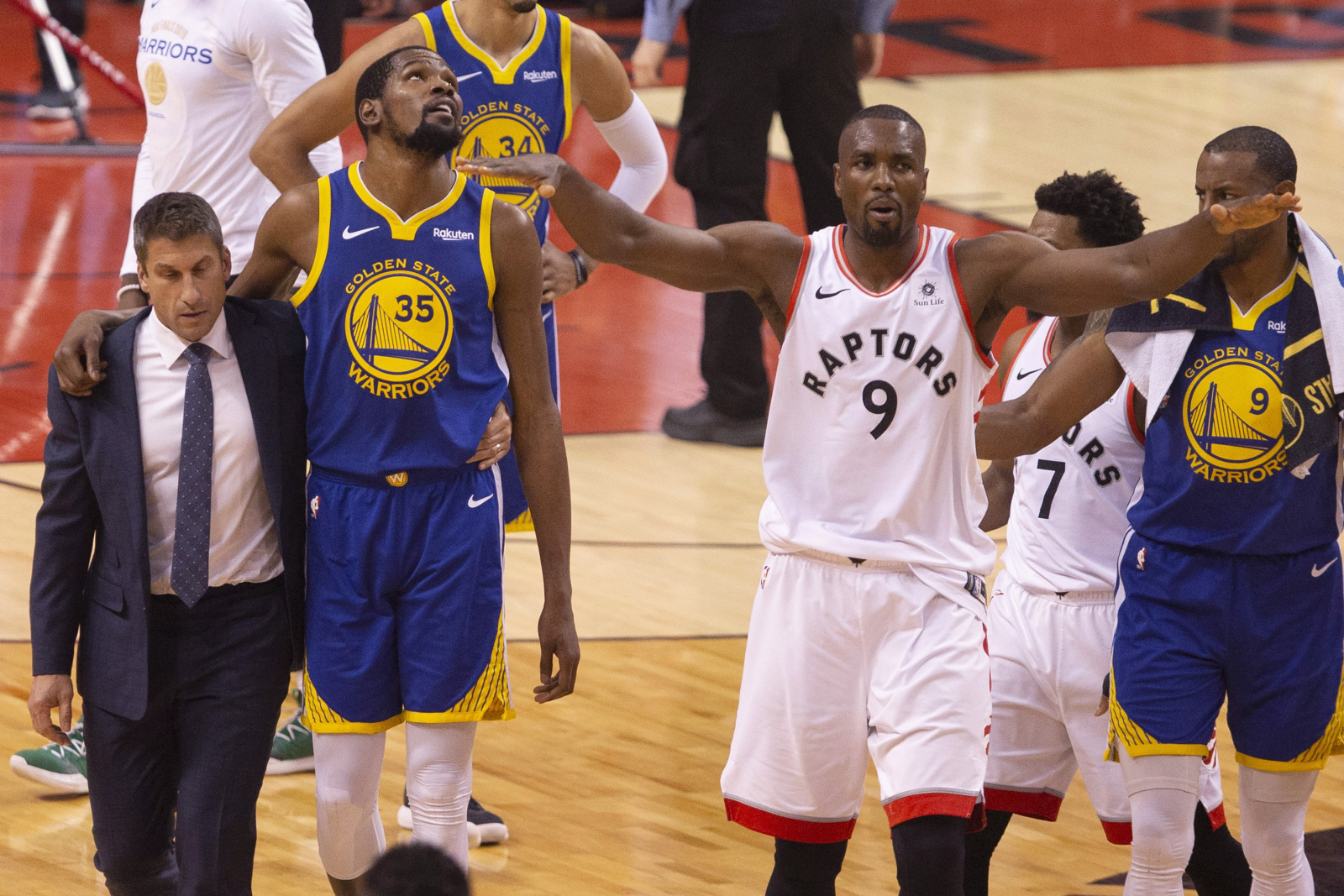 Golden State Warriors forward Kevin Durant (35) walks off the court after getting injured as Toronto Raptors centre Serge Ibaka (9) gestures to the crowd in Game 5 of the NBA Finals in Toronto on June 10, 2019. Photo by Chris Young/The Canadian Press
Previous story
Next story

The video shows a bar packed wall-to-wall with fans watching an NBA Finals game between the Toronto Raptors and the Golden State Warriors as if their lives depend on it.

A few seconds in, the bar erupts into cheers after Golden State player and basketball legend Kevin Durant sinks to the ground, clutching his leg. The entire crowd begins screaming, jumping, cheering and tossing their beverages into the air in what looks like an extremely unsportsmanlike display of joy at a player's injury.

It didn't happen. Some Raptors fans did cheer the injury, but this particular video, posted online Tuesday morning by the American sports and culture blog Barstool Sports, is an edited version of one from 2016.

In fact, the original video has already been used for several widely circulated memes, including two that Barstool Sports also wrote about as if they were real. One was an edit that featured video of the DVD-logo screensaver hitting the corner of the screen. The other, which Barstool Sports tweeted out in April, is edited to show the fans reacting to a pivotal moment in the TV show Game of Thrones​​.

As of midday Wednesday, the Raptors edit posted by Barstool Sports had garnered nearly 22,000 likes on Twitter, 3,300 retweets and 5,400 Instagram comments. The Twitter version alone has been viewed 1.45 million times.

Unlike some of the well-edited fake videos circulating online in 2019, this one is quite sloppy — it shows daylight streaming in through the windows (the game happened at night) no one in the frame is wearing Raptors gear and the edges of the video onscreen waver strangely, among other issues.

Nearly 90 per cent of Canadians have fallen for fake news online, according to a poll released this week by Ipsos Public Affairs for the Centre for International Governance Innovation (CIGI), a Canadian think tank.

Barstool Sports didn't immediately reply to questions from National Observer about the video's origin and whether the blog verifies content before posting it. But in a post on the blog's website, founder Dave Portnoy, who writes under the nickname "El Presidente," said a "reader who was there sent us it."

A blog called Barstool Sports circulated a doctored video claiming to show Toronto #Raptors fans cheering when Kevin Durant got injured. Joke or not, it fooled a lot of people. Fact check by @EmmaMci. #NBAfinals

The post, titled "Raptors Fans Trying to Convince The World This Video is Fake and They Didn’t Cheer For Kevin Durant’s Injury Is Laugh Out Loud Funny," seems to hint at the entire thing being a joke.

"I mean what advantage would Barstool get from doctoring this we'll known meme [sic] and posting it?" Portnoy wrote. "Just for a laugh or a few million clicks? Get out of here."

bUT ThE ScrEEnSaVEr NevER hITs dIRecTLy iN ThE coRnER!!!
*
1. This bar gets bonus points for allowing this foolishness.
2. Who still has a DVD player? pic.twitter.com/Dk9WFQNYZB

Every Game of Thrones fan when Arya took out the Night King #GameOfThrones pic.twitter.com/43HTAnGvDv

Joke or not, plenty of people seem to have fallen for it.

"Our friendly neighbours to the north," wrote an ESPN basketball analyst on Twitter.

In later tweets, Portnoy doubled down on the apparent joke, claiming that the bar showing the game was called the "Toronto Tavern" or the "Triple T." No such bar exists, but someone made a Twitter account for it Tuesday night and tweeted an apology "on behalf of our customers who cheered when an imposing player got injured."

In response to people who pointed out the daylight in the bar, Portnoy claimed the Toronto Tavern has "light-enhancing windows."

Can confirm The Toronto Tavern has unreal light enhancing windows legit thought it was 11:00am when I was in there walked out side BOOM 11:00pm

Barstool Sports' practices have been called into question before. Last year, The Daily Beast wrote about a culture of harassment and misogyny at the media company. Barstool Sports didn't answer The Daily Beast's questions, but in response, Portnoy tweeted out the writer's home phone number.

"Barstool sports" says it all

"Barstool sports" says it all. A perfect oxymoron.
Now the disease of alcoholism becomes a sport!!??

I saw it somewhere on TV _

I saw it somewhere on TV _ CTV or CBC as well -- because i knew about this and I have bnot followed any other media on the Raptors.