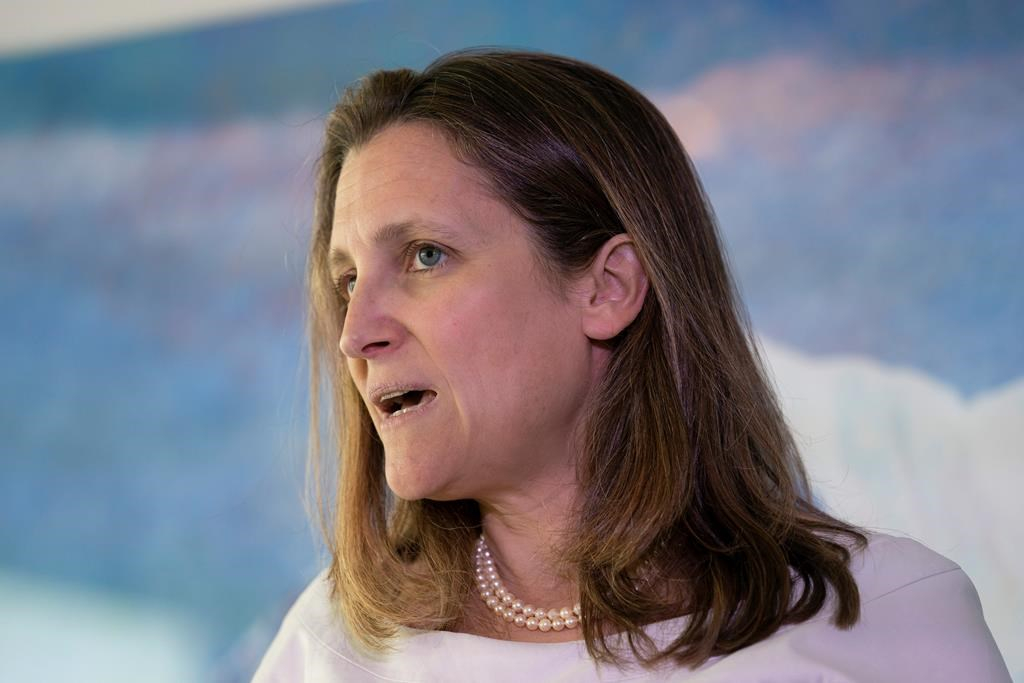 Canada's Foreign Affairs Minister Chrystia Freeland concludes a two-day visit to Washington with a news conference at the Embassy of Canada, on Thursday, June 13, 2019. Photo by The Associated Press/J. Scott Applewhite
Previous story
Next story

Protests raging in Hong Kong are threatening to become yet another irritant in Canada's fraught relationship with China.

China's embassy in Canada on Thursday denounced the Canadian government's recent comments on the ongoing protests as "irresponsible" and "erroneous."

That appeared to be a reference to a statement from Foreign Affairs Minister Chrystia Freeland, which expressed Canada's concern over the unrest and described freedom of expression and assembly as the "bedrock" of society in Hong Kong.

Protesters in the semi-autonomous Chinese territory have been out in force in recent days over a proposed extradition law that would allow suspects to be sent to China for trial.

Thursday's statement from the Chinese embassy accused Canada of interfering in the affairs of the region and urged Ottawa to get behind the proposed law.

"Hong Kong affairs are purely China’s internal affairs, (which) no other country, organization or individual has the right to interfere in," the embassy statement said.

"No country should interfere in the internal affairs of other countries on the grounds of caring for its expatriates. Canada also has many foreign expatriates. What really affects Hong Kong’s business confidence and international reputation is not the amendment of the ordinance, but those acts of violence, which have been incited by external forces and damage social peace and disregard the law."

Hong Kong police reportedly fired rubber bullets and beanbag rounds at the thousands of protesters who broke through barriers outside government headquarters and the legislature Wednesday, leaving 81 people injured, according to Hong Kong's Hospital Authority. Police said 22 officers were among the injured.

Officers at one point "had no choice but to escalate the use of force to disperse the crowd," Stephen Lo, the Hong Kong commissioner of police, told reporters Thursday. "The behaviour of the violent protesters yesterday (Wednesday) imposed a serious threat to the public order."

"The ongoing protests in Hong Kong, which are among the largest in the city's history, demonstrate the deep concern among the people of Hong Kong about their future," Freeland said in a statement Wednesday.

"Canada remains concerned about the potential effect these proposals may have on the large number of Canadian citizens in Hong Kong, on business confidence, and on Hong Kong's international reputation.... Freedom of expression and assembly are the bedrock of Hong Kong's free society. It is vital that any legislation preserve Hong Kong's high degree of autonomy, rule of law, and independent judiciary."

It was the first time Hong Kong police have used tear gas since the 79-day, pro-democracy "Umbrella Movement" demonstrations in 2014, which marked the beginning of a shift to a tougher police approach.

"We are unarmed," said Daniel Lee, a 42-year-old doctor who noted the police wore respirators to protect against tear gas. He said it was the last chance to fight for Hong Kong's future.

"It's expected that we will be hit. There's no way. If no one stands by the kids' side, they will not have any help. This is it."

Canada and China are locked in a diplomatic standoff over last December's arrest in Vancouver of high-tech scion and Huawei chief financial officer Meng Wanzhou, who is the target of a U.S. extradition request on charges of violating American sanctions against Iran. China has detained two Canadians, Michael Kovrig and Michael Spavor, in apparent retaliation.

Freeland firmly rebuffed China's latest demand Thursday to free Meng, saying it would set a dangerous precedent that could endanger all Canadians abroad.

"It would be a very dangerous precedent indeed for Canada to alter its behaviour when it comes to honouring an extradition to treaty in response to external pressure."