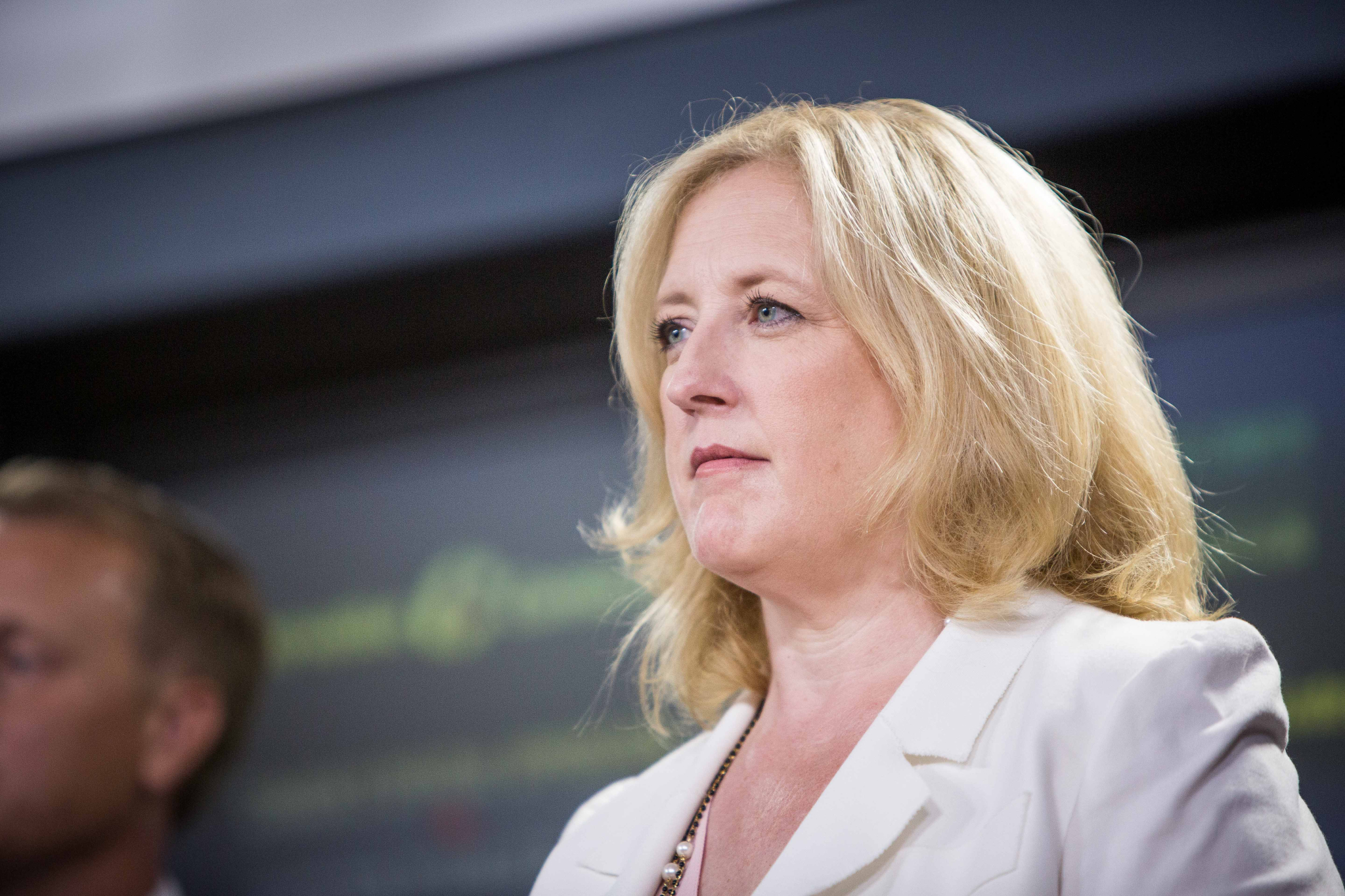 Milton MP and deputy Conservative Party leader Lisa Raitt in a July 20, 2017, file photo. Over the weekend, Raitt deleted a tweet about the connection between extreme weather and climate change after talking with a scientist. Photo by Alex Tetreault
Previous story
Next story

Before going to bed, the Milton MP had tweeted out a Financial Post opinion piece that said, contrary to scientific consensus, “there’s no solid connection between climate change and the major indicators of extreme weather.”

The author of the piece is an economist who has said he does not believe in climate change, a piece of background that Raitt later said she wasn’t aware of at the time. The backlash to her tweet had been swift and overwhelming.

“I did not want to be a lightning rod on this topic,” Raitt said in an interview with National Observer Wednesday. “That was not what my intention was.”

Conversations like the one Raitt found herself in that day play out on social media constantly. They’re usually angry and divisive, and they rarely change anyone’s mind or lead to deepened understanding.

This one, however, was different.

“Hi Lisa — I am a climate scientist,” wrote Katharine Hayhoe, a Canadian researcher who works for Texas Tech University.

"The article you quote above is incorrect and dangerously misleading. For the sake of our shared country, please have the courage and the integrity to update your understanding."

Hayhoe shared links to the latest scientific consensus and YouTube videos that explained it. She also told Raitt to reach out if she had any questions. Raitt read it over, talked with Hayhoe and deleted the tweet.

“(Hayhoe’s) tweet spoke to me, because it was clearly somebody who was giving me the benefit of the doubt that I wasn't trying to make a political statement,” Raitt said.

MP @lraitt explains why she posted that tweet about climate change, and why she took it down after @khayhoe reached out. #cdnpoli

“It wasn't inflammatory, she didn't seek to attack me for being a conservative. And instead, she reached out to provide some of her thoughtful commentary. And I responded by taking a look at it and agreeing.”

Raitt has a science background, holding a master’s degree in environmental biochemical toxicology. She also “fundamentally” believes in climate change and the need to reduce carbon emissions to combat it, she said. Raitt said she didn’t know about the emerging science of attributing extreme weather to climate change, but when she read over the evidence, she realized she had to take down the tweet.

Hayhoe has this type of online conversation a lot. It usually doesn't go so well.

In an interview with National Observer, Hayhoe said she starts climate-science threads on Twitter not for the benefit of the politicians she's reaching out to — “Aside from Lisa, I can't think of a single politician or political appointee who has ever responded, let alone responded favourably" — but for the people who are reading it and questioning their own understanding. People tend to believe political figures and sources they already agree with ideologically, Hayhoe said.

"We assume, 'Well, you know, they're a fairly well-known figure, they must have a team around them who researches this, if this is what they say, then that's probably true,'"

In the end, Raitt shared one of Hayhoe's tweets, saying it was "important" to read through the evidence Hayhoe shared. In another tweet, Raitt also clarified: “Well I’ve learned my lesson in tweeting anything about climate change. I’m not the one to fight with on this because like most I believe that emissions cause climate change and we should reduce emissions."

Hayhoe and Raitt also messaged each other privately, and made plans to get together the next time they’re both in Ontario.

“If all our politicians were like this, we would be in a much better place!” Hayhoe tweeted in response to Raitt’s clarification.

The conversation worked because Hayhoe and Raitt both tried to understand each other's perspective. Hayhoe said her first attempt at this talk happened with her husband, and showed her that most people feel they have good reasons to be skeptical about climate change.

"It's not a case of people doing this largely for nefarious reasons, for selfish reasons, for greedy reasons, for evil reasons," she said. "The vast majority of people say this because they've been given plausible-sounding information by people they trust."

In today's increasingly divisive political moment, whether or not you believe in climate change has also become linked to core values and identity, which means bombarding someone with facts will likely only make them feel defensive, Hayhoe added.

"When it comes to climate change, that means we both lose, because we need to act together to fix this thing," she said. Unfortunately, today, a lot of people are more interested in just scoring points and winning the argument."

Raitt's clarifications didn't end the backlash. Instead, they provoked retaliation from people who believed the Financial Post piece, including a video and post by the far-right media outlet The Rebel that accused Raitt of “grovelling.”

"I wasn't going to win on either side of this," Raitt said. "Me being caught in this crossfire between two different streams of thought on whether or not extreme weather is a result of climate change, that's not an argument I am educated enough to have."

Still, questions over the incident have continued to swirl. An article published Tuesday by HuffPost said that, when asked directly if he believes there’s a connection between climate change and extreme weather, Conservative Party Leader Andrew Scheer instead said he doesn’t believe a carbon tax is the best way to address climate change.

While Raitt said she can’t speak for Scheer, she believes “people are just getting their heads around this kind of stuff.”

“I take my lead from him,” Raitt said. “We're trying to show a path forward together instead of creating division and arguing about what causes what.”

Raitt also pointed to Wednesday’s announcement that the federal Conservative Party will release its plan to address climate change on June 19.

“The reality is we all agree we need to reduce emissions,” Raitt said. “The question is, is your plan going to work? And is it more than just a tax plan?”

You could always ask me, @AndrewScheer. I spoke on this at a US congressional hearing just today. https://t.co/s4wTI9w5UT

In response to the HuffPost article, Hayhoe tweeted to Scheer: "You could always ask me" about how climate change is linked to extreme weather.

"There was no response," Hayhoe said. "That's what I'm more used to."

It seems the ugly truth is

It seems the ugly truth is that major oil companies understood climate change was real and we were causing it by about 1980. Instead of sounding the alarm they have spent hundreds of millions of dollars on denial and disinformation campaigns. Virtually all the denial and confusion over climate change is the result of this. Could this be the biggest case of criminal negligence since big tobacco was telling us their product was healthy?

"While Raitt said she can’t

"While Raitt said she can’t speak for Scheer, she believes “people are just getting their heads around this kind of stuff.”"

That says it all. She and Scheer are too high up in the food chain of our society to get away with saying "I had no idea about all this stuff" with regard to the climate emergency. Sartre talked about "bad faith", which is another way of saying "I don't want to know, because that would inconvenience my career". How much different is that from living next to a concentration camp, seeing lots of trains filled with starving, lice ridden people rolling up to it and then rolling away empty, smelling burning flesh from the giant smokestacks, and, hearing constant propaganda from the govt saying "we must eliminate the untermenschen"---and saying "I had no idea. How could I have known?"

Will any reporter be allowed near enough to ask Raitt that question and have the courage to ask it? That's no "scoring points", that simply trying to figure out what is rattling around in that moron's empty little head.

Raitt is still a member of a

Raitt is still a member of a party that constantly uses falsehoods and innuendo to further their ambitions. To date, I have not seen any member of any Conservative Party state that they do not promote dissension, bigotry, or racism, including hatred to those seeking asylum in Canada.

While she claims to believe

While she claims to believe the facts of climate science we are left to ask, "do we believe Lisa?"

She can prove that she

She can prove that she finally gets it, by leaving the party that is preparing to now pay 'lip service' to what they denied so effectively under Steven Harper.....we do have a climate emergency Lisa, and it predates Trudeau's politically motivated vote on the term by several years.

Any one with a high school education is capable of understanding the science, though perhaps it takes some collage to be realistically terrified by the scientific conclusions. Just one phrase: POSITIVE FEEDBACK LOOPS...keeps me awake some nights.

Join the resistence, and put your considerable political capital to work creating that Green New Deal....even it might not save us at this late hour, but its a slender hope. Raining cats and dogs in parts of Alberta now, a flooding event, if it continues.

Time to stop the posturing, and actually stand up for the earth we all love.