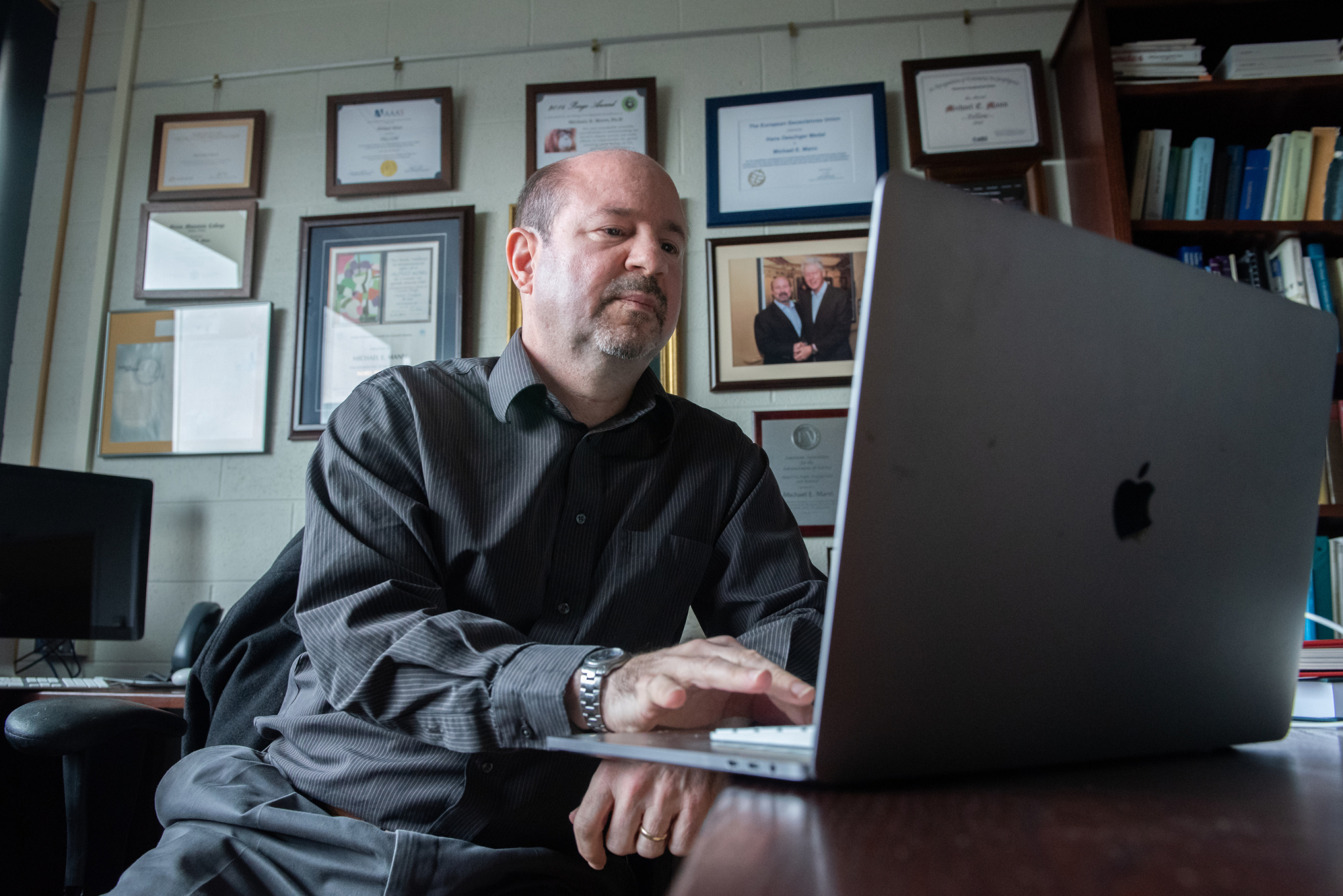 In 2011, renowned scientist Michael E. Mann sued a Canadian think tank that published an interview suggesting his work on climate change was fraud.

"(The apology) gives me faith in our legal system that truth can still win out, even in an era of 'fake news' and 'alternative facts,'" Mann said in an email to National Observer.

In the fight against climate disinformation, experts like Mann, an atmospheric scientist at Pennsylvania State University, are turning to new arenas.

Mann is best known as the lead researcher on a landmark 1998 paper on climate change. He and three colleagues reconstructed global temperatures going back about 500 years, producing a now-infamous sideways-hockey-stick-like graph of global temperatures that showed a sharp upswing beginning in the 1900s.

Mann has spent the two decades since the paper’s publication defending it and his reputation against climate change deniers — sometimes in court. He settled with the Frontier Centre on Friday, but a related case in British Columbia and a similar one in the United States are ongoing.

In a message posted to its website, the Frontier Centre apologized for publishing “untrue and disparaging” comments about Mann.

"Although the Frontier Centre for Public Policy still does not see eye to eye with Mr. Mann on the subject of global warming and climate change, we now accept that it was wrong to publish allegations by others that Mr. Mann did not comply with ethical standards..." the think tank wrote in part.

I've settled my claims in BC Supreme Court against The Frontier Centre for Public Policy Inc. on a basis which includes the following retraction & apology. I have not settled my claims against Tim Ball, who remains a defendant in that lawsuit: https://t.co/3q5YhWoxxQ pic.twitter.com/SMWrD6LxlG

In an email to National Observer, Frontier president and CEO Peter Holle said the group is choosing to address the issue of climate change through its other activities instead of the courts.

Renowned climate scientist Michael E. Mann got an apology Friday from a think-tank that published an interview attacking his reputation. In the fight against climate disinformation, experts like him are turning to new arenas.

“The organization had an opportunity to settle with Mann to avoid further expenditure of time and resources on the matter,” Holle wrote.

Though Mann said the Frontier Centre was smart to retract and apologize, he also pointed out that the case was about untrue allegations of misconduct, not the group’s stance on climate change, making it an outlier.

"Making false and malicious allegations about a scientist is illegal," Mann said by email. "The law is the appropriate recourse, and often an effective one, as this latest episode demonstrates."

Climate scientists should be challenging climate disinformation publicly more often, said University of Calgary climatologist Shawn Marshall, "but it is a matter of picking our battles." Scientists aren't marketers, Marshall added, but now find themselves in the business of convincing the public their findings are real — an especially difficult task in the polarized realm of social media.

One example played out in real-time Saturday when Milton MP and deputy Conservative party leader Lisa Raitt — who has a master's degree in environmental biochemical toxicology — tweeted a link to a Financial Post opinion piece that falsely claimed, against scientific consensus and a report released by the federal government in April, that there's "no solid connection between climate change and the major indicators of extreme weather." The story was authored by an economist who does not believe in climate change.

"Hi Lisa — I am a climate scientist," tweeted Hayhoe, a Canadian working at Texas Tech University, linking to YouTube videos explaining the climate crisis. "The article you quote above is incorrect and dangerously misleading. For the sake of our shared country, please have the courage and the integrity to update your understanding."

Hayhoe shared several more links and invited Raitt to reach out if she had questions. Raitt deleted the original tweet in short order and shared one of Hayhoe's, saying it was "important to read this as well."

Well I’ve learned my lesson in tweeting anything about climate change. I’m going to be transparent & let you know I’m deleting the earlier tweets. I’m not the one to fight with on this because like most I believe that emissions cause climate change and we should reduce emissions

"Well I’ve learned my lesson in tweeting anything about climate change," Raitt posted later the same day. "I’m not the one to fight with on this because like most I believe that emissions cause climate change and we should reduce emissions."

Hayhoe replied with a thank you: “If all our politicians were like this, we would be in a much better place!” she tweeted.

Most people who deny climate change do so because they've received information that lines up with their beliefs from a source they trust, Hayhoe told National Observer.

In an interview with National Observer Wednesday, Raitt said the original tweet wasn't an attempt at a climate change-denying political statement — she was sharing an article she'd read, and wasn't aware of the author's background. Once Hayhoe and others pointed out the clash between the article and scientific consensus, she realized she "didn't want to be a lightning rod on this topic" and deleted it, Raitt said.

"(Hayhoe's) tweet spoke to me, because it was clearly somebody who was giving me the benefit of the doubt that I wasn't trying to make a political statement," Raitt said. The two later had a conversation in private messages and made plans to meet the next time Hayhoe is in Ontario.

The science of attributing extreme weather events to climate change is an emerging one, and Raitt said she's just learning about it now. However, she said she "fundamentally" believes in climate change and the need to reduce greenhouse gas emissions — something she then took flack over from climate change deniers on Twitter.

"Me being caught in this crossfire between two different streams of thought on whether or not extreme weather is a result of climate change, that's not an argument I am educated enough to have," Raitt said. "I wasn't going to win on either side of this."

Earlier in his career, Marshall said, he used to engage more with online climate-change denial, something he's since given up on. "I used to try to respond to it and give proper sources to support the truth and facts, but then they just came back with more rant and often it turned to harassment and bad language."

Marshall also participated in two public debates with representatives of Friends of Science, a climate change-denying nonprofit, but said he worries it didn't help — climate change deniers can confuse the facts with false information, while scientists must stick to research that might be difficult for non-scientists to fully understand.

"On the other side there's no rules," he said. "It's hard to win against that."

Instead of fighting with climate change deniers directly, Marshall said he now prefers to spend time arming his students with the information they need to combat climate myths.

"I'm feeling defeated," Marshall said. "I feel like we have to fight this in a different way than having arguments with people who don't want to have a discussion."

Another climate change-related legal dispute happened in 2009, when scientist Andrew Weaver, who’s now a B.C. MLA and leader of the province’s Green party, sued the National Post over a series of four articles he said attacked his character. The articles also expressed skepticism about climate change.

In April 2017, a B.C. judge overturned a previous ruling, which was in Weaver’s favour, and ordered a new trial. Weaver’s lawyer didn’t immediately respond to a request for an update, and Weaver said in a phone interview that he couldn’t comment on the case.

A spokesperson for the Post’s parent company, Postmedia, declined to comment as the matter is still before the courts. One of the reporters named in the suit, Kevin Libin, was promoted on Monday to become executive politics editor for the entire Postmedia chain, including local dailies like the Edmonton Journal and Ottawa Citizen.

Climate change court cases remain rare — the best way to combat garden-variety denialism is to try to understand where the person is coming from on an individual basis, Weaver told National Observer. That can allow you to make arguments that appeal to the person’s values, rather than making them feel attacked.

"I don't think it helps to belittle,” Weaver said. “People talk all over each other. Unless you know where someone's coming from you don't know how to address their arguments.”

Though public figures rarely, if ever, back down on climate change denial publicly, Hayhoe said she continues to try to have those conversations for the sake of others who are reading along and might be unsure what to believe.

"Every single one of us, what we do in areas that we don't know too much about is we look to (thought leaders) to form our opinion," she said.

"I do them more for other people who want to know what is the truth."

Editor's note: This article was updated on June 14, 2019 at 2:30 p.m. to include comments from climate scientist Katharine Hayhoe.

Today the Climate Feedback website published its review of Ross McKitrick's latest error-filled article in the Financial Post. The panel of scientists "estimated its overall scientific credibility to be 'low’. A majority of reviewers tagged the article as: Cherry-picking, Flawed reasoning, Misleading."
https://climatefeedback.org/evaluation/financial-post-commentary-misrepr...

Deniers like Ross McKitrick have no interest in clarifying the science. Their purpose is to muddy the waters, confuse the public, and manufacture doubt.
Climate Feedback scientists provide a timely antidote.

There is a reason Ross

There is a reason Ross McKitrick gets published in The Financial Post and not in legitimate climate science journals.

Climate scientists should be

Kate Marvel of Columbia University is a most effective climate scientist-communicator. See her interview on TVO's The Agenda: (aired May 28, 2019).

I'll check this out, thank

I'll check this out, thank you!

We should all be standing up

We should all be standing up more often and challenging climate nonsense. The science is not that difficult. Perhaps National Observer could furnish us some talking points, but the connection between fossil fuel production and use and rising CO2 is a key reality. As is the fact of positive feedback loops...such as extreme fires, torrential rains and sudden flooding..and the way in which a warming earth increases those feedback loops.

Understanding that greenhouse gas emissions have a delayed effect (what we're spewing now, will effect the weather 10 year down the pipe), and that increased emissions trigger other contributing factors (melting permafrost for example, releases large amounts of methane, a greenhouse gas more deadly than CO2, in the short run) isn't hard to grasp once its explained.

We need to talk science....as if we were presenting the material to a grade 9 class....and do it consistently. The scariest thing about climate change (and climate denial) for me, if the complex set of triggers waiting in the wings.....to be turned on suddenly by rising temperatures.
Thinking in terms of two sides...two realities......can't be called thinking any more. We all need to understand the science of Chaos......reducing the variables to 2...true or false....is the modern equivalent of Plato's old myth of the thinkers inside the dark cave, opining on what was real.