Premier refuses to back down on plan to scrap 18,000 immigration applications 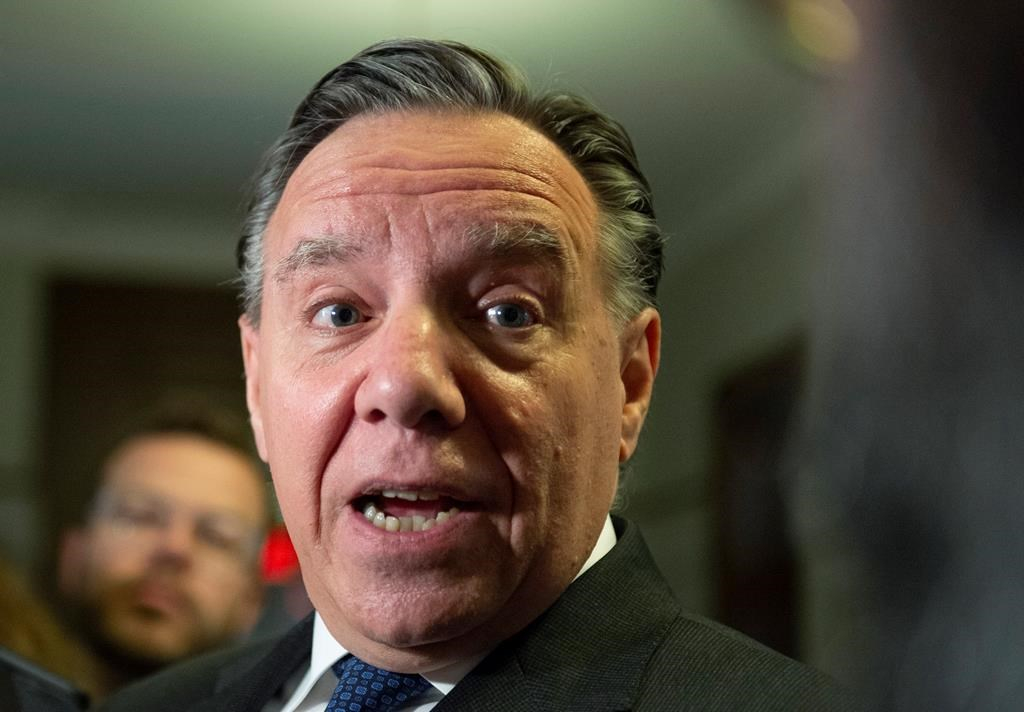 Quebec Premier Francois Legault responds to reporters questions over his meeting with Alberta Premier Jason Kenney, on Wednesday, June 12, 2019 at the legislature in Quebec City. File photo by The Canadian Press/Jacques Boissinot
Previous story
Next story

Quebec Premier Francois Legault is holding firm on his plan to scrap thousands of pending immigration applications, meaning 18,000 applicants would have to restart the process from scratch.

Legault's comments Saturday came before the Coalition Avenir Quebec government's immigration reform bill was expected to pass in the wee hours of Sunday morning, despite pleas from the opposition.

"The old (selection) criteria do not meet the needs of the labour market," Legault said, speaking with reporters at the National Assembly before starting to fast-track Bill 9 in a rare weekend session likely to carry on past midnight.

"Everything that had to be said has been said," he added, stressing employers' concerns over a labour shortage.

The legislation would give the immigration minister more authority over who receives permanent residency in Quebec. It would also allow the government to cancel roughly 18,000 immigration applications, some from people who waited in limbo for years as their files languished in the old system.

Those affected would have to submit another application under a new system, known as Arrima, put in place by the former Liberal government last September. Including the applicants' families, the total number of people affected by the legislation amounts to roughly 50,000.

The three opposition parties sought to derail the legislative session Saturday, but the Speaker rejected arguments that a motion introduced by Coalition party house leader Simon Jolin-Barrette does not respect the spirit of 2009 reforms stipulating a parliamentary gag order can target only one bill.

Before breaking for the summer, the legislature is slated to sit through the weekend to debate Bill 9 and, on Sunday, Bill 21, a controversial secularism bill that would ban public servants including teachers, police officers, Crown prosecutors and prison guards from wearing religious symbols on the job.

The legislative mechanism of closure allows the government to end debate and use its majority to force a vote.

Liberal immigration critic Dominique Anglade said that, since filing Bill 9 in February, the government has provided "no credible explanation" to eliminate the 18,000 applications. She denounced the gag order as an outgrowth of the "stubbornness" of Legault and Jolin-Barrette, who serves as immigration minister as well as house leader.

The Parti Quebecois and Quebec Solidaire said the applications of the 3,700 immigration candidates who have already settled in Quebec should be given priority under the new rules.

During question period in the House, Quebec Solidaire co-spokesperson Manon Masse implored the premier to show "humanity" and "compassion" for the immigration candidates. Quebec Solidaire MNA Andres Fontecilla begged the government to perform a "last gesture of humanity."

Gabriel Nadeau-Dubois, the party's other co-spokesperson, said the government had moved more swiftly than its predecessors to enact a gag order.

"Contrary to the claims of the government, there was no obstruction, there was no blockage, there was no sneering, but an authoritarian coup de force," he said in a scrum before the start of the weekend session.

This is so sad and cynical.

This is so sad and cynical. Doesn't meet the needs of the labour market? I call BS. They can show some respect for others and make the changes for future applications only.