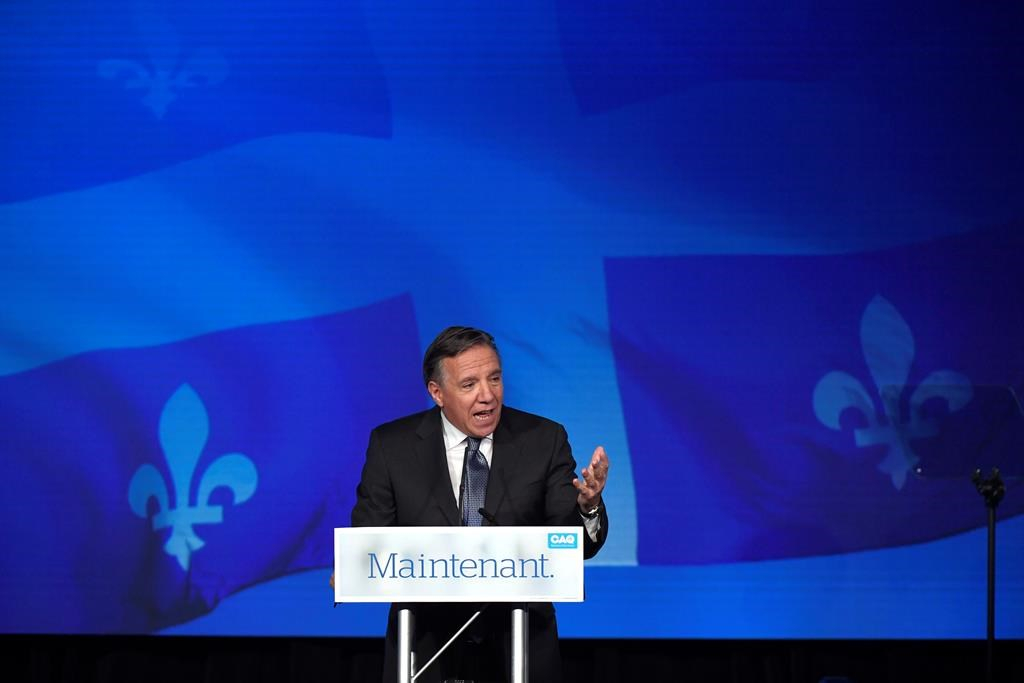 Coalition Avenir Québec leader and premier-designate François Legault speaks to supporters as he celebrates in Quebec City after winning the provincial election on Monday, October 1, 2018. Photo by The Canadian Press/Paul Chiasson
Previous story
Next story

The Coalition Avenir Québec's resounding election victory could clear the way for the party to make good on its vow to cut immigration, a position that worries Quebec businesses and experts who nonetheless see the party's fiscal conservatism as a plus.

Leader François Legault, a former businessman, pledged during the campaign to chop the number of immigrants to 40,000 a year from 50,000 and require them to pass a language and values test after three years in the province.

The target number would mean a 24 per cent drop from the roughly 52,400 immigrants Quebec accepted last year.

"We are concerned about any proposal to reduce the number of immigrants," said Montreal Board of Trade president Michel Leblanc.

Leblanc said many areas of the province are now "beyond full employment," with a demand for more qualified workers in sectors from hospitality to transportation to Quebec's flourishing tech scene.

Legault, whose party won Monday's election with 74 of the province's 125 ridings, has said he wants to increase efforts to integrate immigrants and ensure they learn French, rather than ramp up the number of new arrivals.

"We think we can walk and chew gum at the same time," he said.

Mia Homsy, director of the Institut du Québec, a public policy think tank, said one-third of Quebec's workforce will have to be replaced in the next decade.

"It's already starting to affect investments and production, with a direct impact on GDP," she said in an interview.

To better align graduates' skills with employers' needs, Leblanc and Homsy stressed there should be more funding for education, which Legault has vowed to increase by 3.5 per cent annually — an extra $400 million each year — at the elementary and secondary levels without raising taxes.

The incoming premier has also promised to create a sort of Silicon Valley along the St. Lawrence River, turning the region into a research and innovation hub in collaboration with universities to feed the surging tech and artificial intelligence sectors.

Quebec's on-time high-school graduation rate was the lowest of all the provinces in 2015 at 64 per cent, 13 points behind the national average, according to a May study by the Institut.

Martine Hebert, a vice-president at the Canadian Federation of Independent Business, called the labour shortage a "big problem" but said the solution lies largely in tapping the pool of uneducated immigrants.

"The immigrants who came to Quebec in the past have been very educated, with university degrees," she said.

The vast majority of businesses are looking for less skilled workers with little more than a high school diploma, she said.

Despite labour constraints in some sectors, Quebec is basking in a 15-year high of economic growth with a near-record low unemployment rate, a buoyant Montreal housing market and a string of provincial budget surpluses.

Legault has promised to maintain a surplus for the next four years, as the outgoing Liberal government did in four of the past five budgets.

To help balance $700 million in planned stimulus spending, the Coalition promised it would avoid fee or tax increases above the rate of inflation.

It also said it would slash the debt and save Quebecers $1.7 billion via efficiencies, rejigged programs and 5,000 fewer public-sector jobs through attrition.

"They see them as being more conservative. Although, I think in economic terms, the Liberals have done quite well."

Legault has pledged to put $10 billion toward the debt immediately and to keep the debt-to-GDP ratio below 50 per cent. It had climbed to 54 per cent when Liberal Leader Philippe Couillard came to power in 2014, but now is expected to fall to 49 per cent by the end of the current fiscal year.

Still, Jain questioned whether a Coalition government could dole out $2.6 billion in election promises without dipping into the red and amid forecasts of a mild economic downturn over the next few years.

"Everybody's promising to cut, cut, cut, but nobody's saying where it's going to come from."

Legault acknowledged in September that negotiations with Ottawa would be required to drastically cut down on immigration.

The unemployment rate among newly arrived immigrants remains high, according to a recent study by the Institut du Québec. It sits at 15 per cent for people aged 25 to 54 who have been in Quebec for five years or fewer, compared with 9.3 per cent in Ontario and 7.3 per cent in British Columbia.

Legault has pointed to a supposed exodus of immigrants from Quebec as another reason to invest more heavily in integration programs.

But the Institut's study, using data from Statistics Canada, indicates that more than 84 per cent of immigrants who came to Quebec in 2010 were still living in the province in 2015, while the retention rate in Ontario was 90.7 per cent.