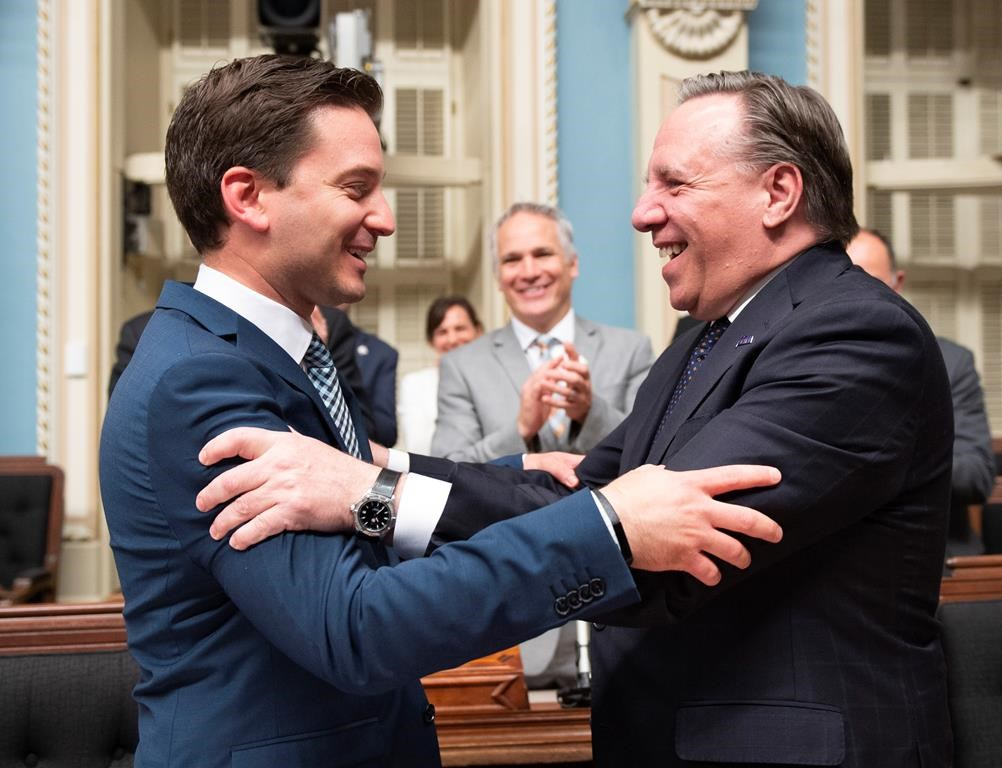 Simon Jolin Barrette, left, is congratulated by Francois Legault after they voted a legislation on secularism, at the National Assembly in Quebec City, on June 16, 2019. Photo by The Canadian Press/Jacques Boissinot
Previous story
Next story

Less than 24 hours after it became law, groups representing Canadian Muslims and civil liberties advocates sought Monday to have Quebec's secularism legislation struck down as unconstitutional.

The National Council of Canadian Muslims, the Canadian Civil Liberties Association, and Ichrak Nourel Hak — a Universite de Montreal education student who wears a hijab — are listed as plaintiffs in the case.

They are seeking an immediate judicial stay on the sections of the law that prohibit public sector employees from wearing religious symbols at work. They are also seeking a stay on the section that requires people to give or receive state services with their faces uncovered.

Their lawyer, Catherine McKenzie, said she'll be in Superior Court Thursday arguing for the stay application. The end goal is to have a judge strike down the entire law, known as Bill 21 — but she says the obvious legal avenues to fight it were blocked.

Bill 21 invokes the notwithstanding clause of the Canadian Constitution. That clause prevents citizens from challenging the law for violating fundamental rights and freedoms protected by the Canadian charter.

The legislation passed by a vote of 73 to 35 Sunday night after the Coalition Avenir Quebec used the mechanism of closure to end debate on the bill. The new law prohibits public workers in positions of authority — such as teachers, police officers, judges, prosecutors — from wearing religious symbols on the job.

"Do I agree that this law is discriminatory? Absolutely," McKenzie said in an interview. "But that's not necessarily the argument that's available to me."

Instead, the stay application argues Bill 21 is invalid because it violates the Constitution in several other ways. For example, it says the law encroaches on federal jurisdiction by attempting to legislate the religious observance of Canadians.

"The courts have long recognized that only Parliament may adopt laws with the moral purpose of enforcing religious observance," it says. "The same must be true of laws that seek to enforce religious non-observance."

The application filed in Superior Court also argues the law is "impermissibly vague and impossible to apply consistently."

The third and final argument in the court application states Bill 21 violates the "Constitutional architecture" of the country. Canadian law, it argues, protects the rights of people to participate in their institutions.

But Bill 21 "excludes visibly religious individuals from participating in a range of important public institutions, and thus keeps Quebec's public institutions from reflecting the communities they are meant to serve," the application reads.

Immigration Minister Simon Jolin-Barrette, who sponsored the bill, told reporters Monday he is not worried about the court challenge because the law is shielded by the notwithstanding clause.

"I am extremely confident in the validity of our law," he said. "All the more because we took all the judicial tools to ensure the secularism law applies and remains valid."

Jolin-Barrette said the government would defend the law "with conviction and firmness" if it were to be challenged.

Representatives from the National Council of Canadian Muslims and the Canadian Civil Liberties Association held a news conference outside the Montreal courthouse to condemn the law.

Farooq said Hak wasn't able to attend the news conference because she was in final exams. She is described in the court application as someone who moved to Canada from Morocco in 1994 and who is completing a bachelor's degree in teaching French as a second language.

She wears a hijab, and therefore according to Bill 21 will not able to teach in a Quebec public school after she graduates.

The application states "Nourel Hak is shocked, hurt, and insulted that the Government would tear her sought-after career away from her simply because she wears the hijab."

Another prospective teacher attended the news conference. Amrit Kaur, 28, said she recently graduated from university and doesn't know whether to remain in Quebec.

Kaur, who wears a turban, told reporters: "Asking me to take it off, is like asking me to do a strip search. Or to go to work feeling upset and not in the best mental health .... Who is the state to tell me what I can and can't put on my body?"

In Ottawa, several Liberal members criticized the province Monday for passing the law.

"This a sad day for Quebec," Montreal Liberal MP Anthony Housefather, chair of the justice committee, wrote on Twitter. "This law violates individual rights and shatters some people's dreams. It represents a fundamental misunderstanding of what the separation of church and state is supposed to mean."