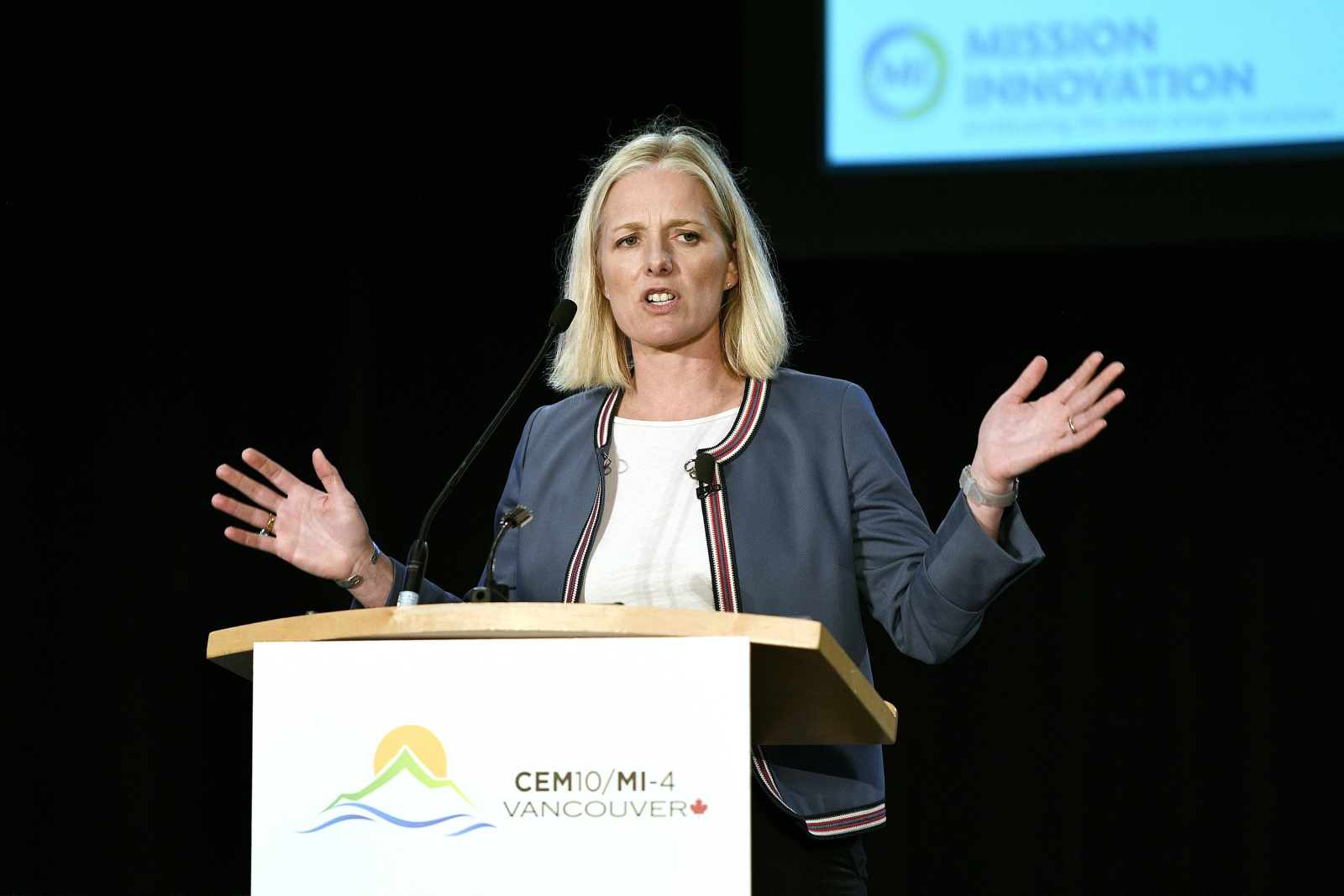 Environment and Climate Change Minister Catherine McKenna speaks at a clean energy summit in Vancouver on May 28, 2019. File photo by Jennifer Gauthier
Previous story
Next story

A pair of senators urged their colleagues Monday evening not to dig in on rejected amendments to the Trudeau government's environmental assessment overhaul.

Their comments came after the head of a Canadian manufacturing lobby group called on the Senate to do precisely the opposite for Bill C-69.

​Non-affiliated Sen. Grant Mitchell, who was appointed Government Liaison in the Senate, moved a motion to accept the bill as it currently is, following the government's decision last week to accept 99 amendments either verbatim or with alterations, while rejecting dozens of others.

Hours earlier, Dennis Darby, president and CEO of Canadian Manufacturers and Exporters (CME), had told reporters in a press conference in Ottawa that the Senate should stick to their guns on three areas: more consideration of job creation in the bill, the importance of local consultation in assessments and hard caps on assessment lengths.

As the government liaison, Mitchell is one of the government's representatives guiding its legislation through the chamber, and also provides a bridge between senators, ministers and staff to discuss legislative matters.

The position of government liaison replaced the previous role of government whip that had enforced votes along party lines. Mitchell is one of three senators who form the Government Representative Office in the Senate.

In a lengthy speech, he explained the government's thinking behind accepting or rejecting the Senate's many amendments. He said he was "very confident in recommending that we accept the government’s message."

The debate adjourned before senators could vote on Mitchell’s motion. Debate is set to resume this week.

Earlier in the day, Darby spoke alongside representatives from the Newfoundland and Labrador Oil and Gas Industries Association, the Canadian Chamber of Commerce and the Lax Kw'alaams Band from B.C.

He said their appearance together represented "one more try” to get the government to change its mind.

CME represents several members in the oil and gas industry, as well as businesses that benefit from the expansion of fossil fuel infrastructure, like pipelines, in Canada.

Darby said his members refine and upgrade natural resources and produce materials used in pipeline construction, such as the steel casts, bolts and concrete.

"Our members across Canada rely on the successful expansion and improvement of energy projects," he said, adding they've worked on other infrastructure like airports, highways and hydro dams, all of which fall under C-69.

National Observer has examined how the government treated the Senate's amendments related to the three areas that Darby had highlighted:

Who should be allowed to partake in reviews?

In 2012, the Harper government tore up Canada’s environment assessment system. Its replacement included a narrower definition of who should be allowed to participate in reviews of major projects like pipelines and oil drilling sites.

This definition became known as the standing test. It restricted public participation to those “directly affected by the carrying out of the designated project” and to those with “relevant information or expertise.”

The National Energy Board (NEB) has used this test to determine whether it would grant standing to people seeking to comment on projects that fall under the federal environmental assessment system.

The process excluded Canadians who, for example, were opposed to broader aspects of a project, like the carbon pollution it might generate, but didn't live close to the site or have other such direct connections.

The changes in the law were followed by a swell of protests and legal action against big carbon-intensive resource projects, a consequence that many pointed to as proof that the assessment system wasn’t serving its intended purpose.

In 2015, the Liberals campaigned on a promise to introduce a new process that would provide ways for Canadians to “express their views” and experts to “meaningfully participate” among other changes.

Bill C-69 calls for the NEB to “ensure that the public is provided with an opportunity to participate meaningfully” within the time period specified by the regulator.

One amendment from the Senate attempted to bring back a version of the standing test. It would have given the regulator the option to “establish the manner that it considers appropriate” for the public to participate, taking into account “the degree to which a member of the public is directly affected” and “whether a member of the public has relevant information or expertise.”

The government rejected this amendment. Darby argued Monday that, without it, Bill C-69 will create conditions in which “local voices can be drowned out by professional activists from abroad.”

But Stephen Hazell, director of policy and general counsel at Nature Canada, said in an interview Monday that restoring public trust in environmental assessments wouldn’t be possible if public participation were limited.

“We think that’s just wrong. It doesn’t matter where you live, or whether you’re directly affected or not. Any Canadian should have the opportunity to participate,” he said.

“If pipelines are so important for national unity, then certainly all Canadians should have an opportunity to express their views on it.”

Mitchell explained Monday evening in the Senate that the government rejected the amendment because it was contrary to the recommendations of an expert panel that looked into the NEB's modernization.

The panel said they were "sympathetic" to the view that allowing too many people to participate runs the risk of "becoming unmanageable," but also felt strongly that mass participation could be permitted "while respecting the integrity of the inclusive hearing process."

Mitchell added since the bill "already specifies that public engagement must occur within legislative timelines of an impact assessment," consultations couldn't be used as a reason for extending time limits.

How long should an assessment take?

Darby said manufacturers are concerned about “the length of time it takes to get approvals” with C-69. He suggested investment dollars would flow elsewhere in the world before projects could see the light of day.

“Capital has been and will continue to go elsewhere if we don’t do something,” he said.

The Harper government made it clear it wanted to fast-track fossil fuel projects in Canada with its changes to the assessment system, stipulating that assessors were “not to exceed 24 months” in reaching a conclusion.

Bill C-69 introduces a new pre-assessment period, called “information gathering,” a kind of scoping exercise where proponents can hear about support and opposition to their project without having to generate the kind of paperwork that an official assessment requires.

The bill tightens the time limit imposed on one common portion of the assessment process, which involves a panel being struck to evaluate the environmental elements of a project. A minister can strike such a review panel if it serves the public interest. Those would be limited to 600 days, or about 20 months, four fewer than under Harper.

However, the minister also has the power to extend the time limit “up to a maximum of 90 days” and they can recommend time extensions “any number of times.”

Mitchell said a lack of flexibility to extend a decision "could result in an arbitrary rejection of a project."

"The bill’s significantly shorter legislated timelines in every category of review and supporting regulations, in addition to the amendments I have just described, will ensure a timely and efficient process without the need for a maximum timeline," he argued.

Hard caps for timelines, Hazell said, can actually be counter-productive in getting projects completed.

“If you don’t have people more or less on side, then you run into problems,” he said. “If you look at the history of Northern Gateway, or of Trans Mountain, they had firm timelines they had to meet⁠ — but the projects ran into problems for other reasons.”

How should ‘economic issues’ be defined?

“Economic issues” constitute one of the areas that experts are required to advise the regulator on during impact assessments. The others being scientific, environmental, health and social areas.

"(Bill C-69) doesn’t give enough weight to job creation, and increased investment here at home for the purpose of project reviews," Darby said, arguing, “it’s too easy for the benefits to be lost in a sea of negativity.”

Peppering the bill with additional economic considerations, however, is missing the point of an environmental assessment law, countered Hazell.

He said forcing regulators to give some consideration to environmental sustainability instead of entirely focusing on economic matters was a good thing.

“The reality is that we have impact assessment laws because economic benefits were the only things that government looked at historically,” Hazell said.

One rejected amendment that had been proposed would have been to add “economic conditions” as an additional area for the minister to consider in environmental assessments, as well as reports from review panels and other “public interest” factors that concern issues like how sustainable the project is, and how it impacts Indigenous groups and their constitutional rights.

The government did accept an amendment that recognizes the positive economic impacts of projects in the bill's "purpose" section, according to Mitchell, although it also changed its wording.

The amended wording "clarifies that the agency must set out the scope of factors to be assessed by the end of the early planning phase, early in the process," he said.

"The agency will be able to tailor assessments so as not to overburden proponents, while still allowing the public and Indigenous peoples to raise any matter of concern to them in the assessment and have those concerns heard."