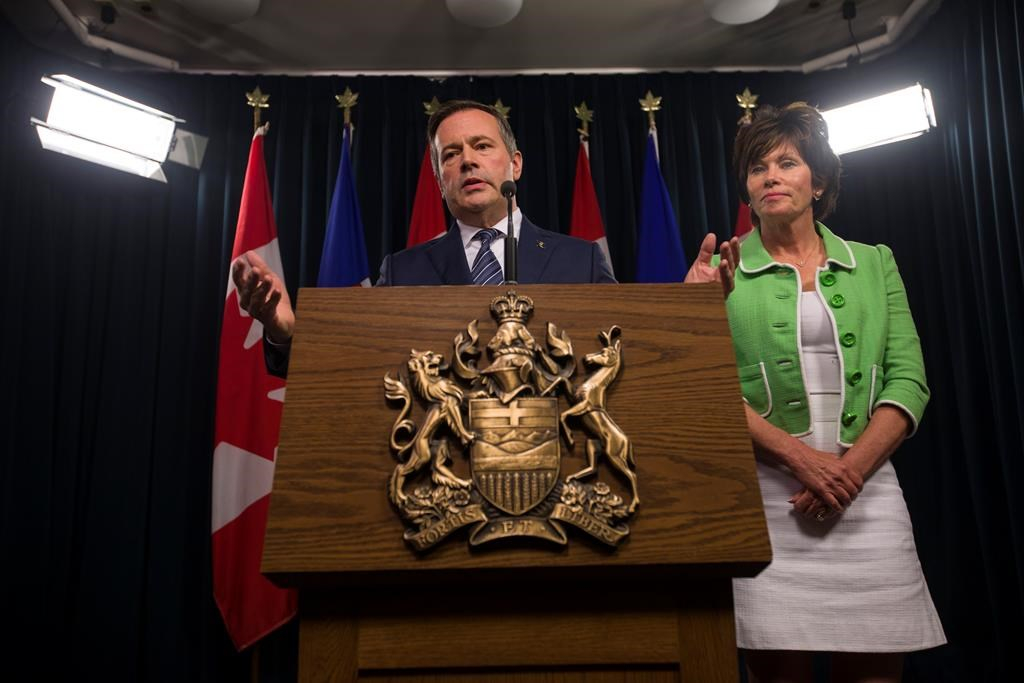 Alberta Premier Jason Kenney and Minister of Energy Sonya Savage respond to the federal approval of the Trans Mountain Pipeline in Edmonton, Alberta, on Tuesday, June 18, 2019. Photo by The Canadian Press/Amber Bracken
Previous story
Next story

Alberta Premier Jason Kenney is lauding the federal government's decision to approve for a second time the construction of the Trans Mountain oil pipeline expansion project.

But Kenney says he won't be celebrating until shovels are in the ground and the project, which triples the capacity of the existing line, is built.

Kenney also says Prime Minister Justin Trudeau needs to do more on other fronts to the get more Canadian oil to global markets.

He reiterated his call for Ottawa to accept amendments on Bill C-69, which changes how energy projects are assessed.

Critics say the bill, as it stands, would make it very difficult for energy mega-projects like pipelines to get built.

The Trans Mountain project will take more oil from Alberta to ports and tankers in B.C. to fetch a better price abroad.

"This is a test for our economic future," Kenney said Tuesday.

"Right now, without market access to global energy markets, we are massively underselling one of our country's greatest assets."

He added, "Canada's energy producers have demonstrated a growing investment and progress in shrinking their environmental and carbon footprint."

Trans Mountain was approved in 2016 when former Alberta premier Rachel Notley's NDP was in power.

The project was met with fierce opposition from the B.C. government and others and was cancelled altogether by the Federal Court of Appeal in 2018 pending further consultations with Indigenous groups and more studies on the marine impact.

Notley said Tuesday the federal decision to re-approve the project was the right one and it was aided by her government's work to build awareness and public approval for it.

But Notley said she worries Kenney's confrontational approach to oil critics will make it harder for Trans Mountain to get built, even with the federal approval.

"The question is: what happens from this point forward?" asked Notley.

"The level of approval and support for the pipeline in B.C. has grown because of the work that we've done.

"But picking a fight with those who are opposed to it and essentially enhancing the intensity of the opposition actually jeopardizes the ability of the pipeline to move forward without delay."

Kenney said he won't be taking any advice from Notley, who is now the Opposition leader.

He said Notley's government failed miserably by generally speaking out against pipelines and pushing Trans Mountain only out of political convenience.

He also said he hopes B.C. Premier John Horgan will stop fighting against the project.

"I would say to Premier Horgan, 'You've reached the point of diminishing political returns ... Let's be nation builders together. Let's realize the dream of confederation. Let's be partners in prosperity.'"

Yes, Kenney, you fossil fool, you are only intensifying the resolve of all informed people, without vested interests, to oppose this economically and environmentally insane pipeline until it is stopped permanently.