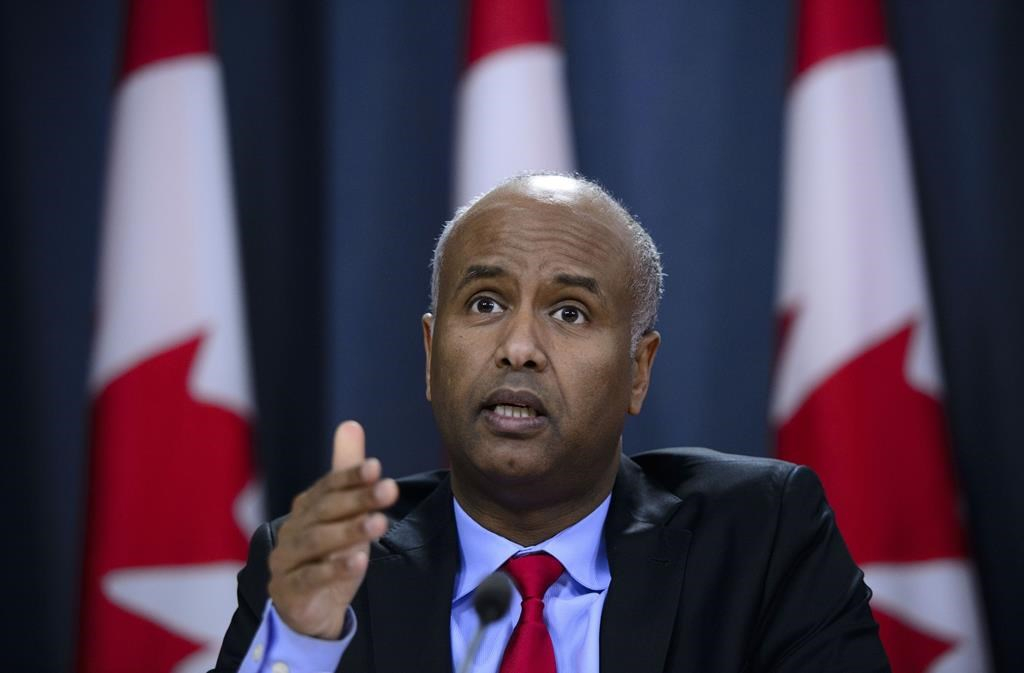 Minister of Immigration, Refugees and Citizenship Ahmed Hussen responds to the 2019 Spring Reports of the Auditor General in Ottawa on Tuesday, May 7, 2019. File photo by The Canadian Press/Sean Kilpatrick
Previous story
Next story

Immigration Minister Ahmed Hussen says he would like to see Canada welcome more refugees than it currently accepts and believes more of them should be able to enter through economic immigration programs.

Speaking to participants in a conference marking World Refugee Day on Thursday, Hussen acknowledged that Canada cannot resettle every refugee in the world. After all, a United Nations report issued this week estimated the number of refugees worldwide at nearly 26 million.

But as someone who arrived in Canada as a refugee himself, Hussen spoke with passion about the need for Canada to do more.

"My wish is that we continue to increase levels in our immigration system for refugees. I'm very open to saying that, and I will do whatever I can, in whatever position I am in, to continue to push for higher refugee numbers every single year."

One way to dramatically increase those levels would be to open up economic immigration streams to refugees in addition to humanitarian programs, Hussen said.

One refugee has already arrived in Canada this way, thanks to a pilot program launched last year that aims to move skilled refugees in Kenya and the Middle East through economic streams like the provincial-nominee program.

Mohammed Hakmi was living in Lebanon after fleeing his home country of Syria before being recruited to work for a tech firm in Kitchener-Waterloo earlier this year. This happened thanks to the pilot program being run by Talent Beyond Boundaries, a non-government organization that has partnered with the UN Refugee Agency to match refugees with employers in Canada and Australia.

Hussen said he would like to "massively" ramp up this pilot as a way to bring more refugees to Canada.

Canada accepted 28,100 refugees for permanent resettlement in 2018 — the highest number among all countries that resettled refugees from temporary locations abroad.

This year, that number is projected to rise to 29,950. It does not include asylum-seekers who land in Canada and gain protected status here.

But while Canada is being applauded for its efforts on refugee resettlement, migration experts and advocates are expressing concern about a global rise in rhetoric targeting refugees.

Earlier this week in the House of Commons, Hussen said, he heard Conservatives shouting out of turn, calling the wave of irregular migrants who have been crossing into Canada by avoiding official border checkpoints "illegals" — a term he takes exception to.

"There's a lot of fearmongering going on," he said.

A group of human-rights organizations issued a joint letter to all political parties earlier this month saying they're worried about how refugees and migrants in Canada might be characterized during the upcoming federal election campaign.

"In many countries around the world, especially during election campaigns, refugees and migrants have been talked about in ways that insult their dignity and humanity, contribute to xenophobia and racism, and are frequently grounded in distortion and misinformation," the letter states.

"We know Canadians value compassion, equality and safety for all. In the upcoming federal election campaign, we call on you to demonstrate your leadership by respecting these principles and speaking out when they are undermined by others."

Hussen says he believes a key way to stop negative attitudes toward refugees is to recognize them as valuable individuals who can help expand Canada's economy, rather than stereotyping them as a drain on resources.

"Everywhere you go in Canada there's a severe labour market shortage in all kinds of industries — low-skilled, intermediate-skilled and high-skilled — despite the increase in immigration levels that we have put in place," he said.

"How can we include refugees in that conversation? I think that's up to government and all of the stakeholders in this discussion who care about refugee issues ... it's important to constantly cite the economic advantage of refugees."