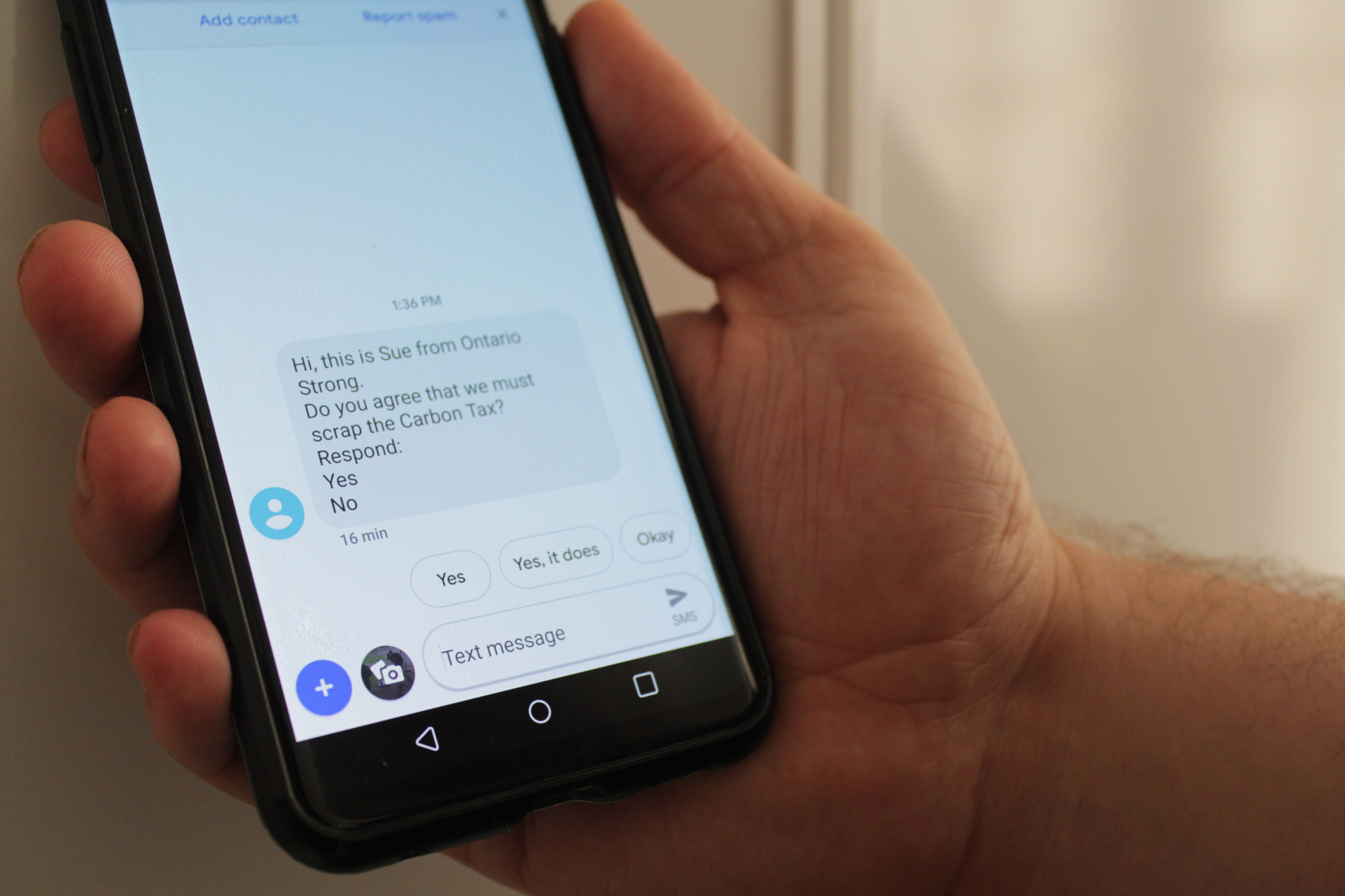 Many Ontarians received an automated text message over the weekend, asking if they agree that the carbon tax must be scrapped.

Who's behind the campaign and what they plan to do with the responses is a mystery, and could remain so.

The message purports to be from "Sue" from a heretofore unknown group called Ontario Strong.

A group by that name does have a website but it appears to be a work-in-progress that imparts little information, other than a brief mission statement that exhorts people to "stand up for Ontario and be proud of the place we call home."

The text message appears to be an attempt to identify voters who are opposed to the carbon tax imposed by the federal Liberals, presumably so they can be targeted during the election campaign this fall.

No laws regulate this kind of political advocacy; only after June 30 will anyone spending more than $500 have to register with Elections Canada as a third party, adhering to spending limits and disclosing who they are and, eventually, where their money came from.

In the meantime, some Ontarians who received the mass text message are venting annoyance on social media.

Among those who received the message is Liberal MP Pam Damoff, who represents the riding of Oakville North-Burlington.

"How did you get my number, Sue? And who the heck is Ontario Strong? Is that code for #CPC (Conservative Party of Canada)?" Damoff tweeted Sunday.

Conservative party spokesman Cory Hann said neither he nor others at party headquarters had ever heard of Ontario Strong before. And he said the party has "no affiliation at all with them."

But unlike Ontario Strong, he noted that Canada Proud and Ontario Proud have always been upfront about who's involved and their objectives.

"We're always transparent in who we are. Whether it's Engage Canada or others, I think people should be more upfront about who's behind these groups and what their intentions are," Ballingall said.

Engage Canada has been running ads skewering Conservative Leader Andrew Scheer as a weak "yes man" to Ontario Premier Doug Ford. The group's directors include former Liberal and New Democrat strategists, supported by labour unions, professional associations and individuals. Engage ran its anti-Scheer ads during the final games of the recent NBA playoffs between the Toronto Raptors and the Golden State Warriors.

Those were countered by another group, called Shaping Canada's Future, which ran its own ads deriding Trudeau. That group (like Canada Proud) has a public listing as a non-profit corporation, with an address and at least one named director; it appears to be headed by a key figure in Alberta Premier Jason Kenney's 2017 leadership campaign.

If Engage and Shaping Canada's Future cease political activity by June 30, they will never have to reveal precisely who is behind them, how much they spent or where they got their money.

The mass text message from Ontario Strong read: "Hi, this is Sue from Ontario Strong. Do you agree that we must scrap the Carbon Tax? Respond: Yes No." The phone number associated with the message is a land line in Belleville, Ont., according to a Canada411 search.

Another text received by a reporter in National Observer's Ottawa newsroom was associated with a land line in that city.

According to social-media posts, the same group also conducted a recent robocall campaign, asking people in an automated phone message if they support a pipeline across Ontario to Quebec. The Canadian Radio-television and Telecommunications Commission requires third-party political robocallers to register but that applies only during the official election campaign, which won't kick off until September.

The phone numbers from which the text messages and robocalls emanated are answered by Ontario Strong voice mail.

In its mission statement, Ontario Strong promises to "speak up on the issues that matter to Ontarians" and to "always stand for the values that created Ontario," which it describes as "an example of a prosperous, peaceful, diverse and orderly society for the rest of the world to emulate."

There is nothing on the site to identify the individuals behind it. Inquiries sent through the site's "contact us" email are answered with the message: "Thank you for your feedback."