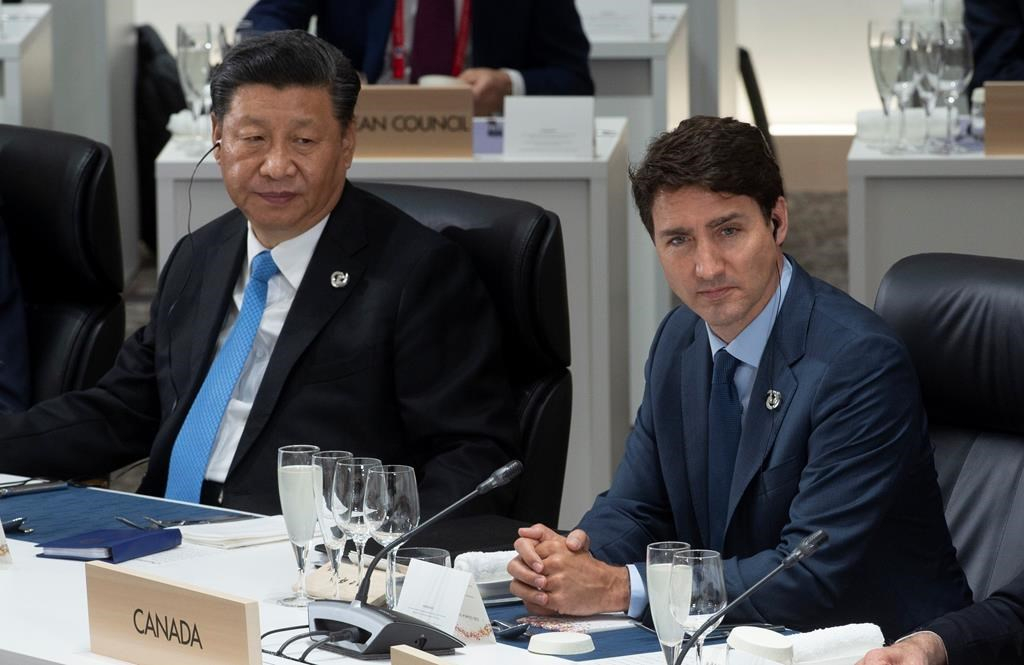 Canada is fortunate to have assembled a "broad international coalition" of countries who support Canada and believe arbitrary detentions are harmful, Foreign Affairs Minister Chrystia Freeland said Friday at the G20 summit in Osaka.

Freeland, who spoke to reporters alongside her cabinet colleague Finance Minister Bill Morneau, said China has been hearing about the detention of two Canadians from a range of countries, adding that efforts continue here at the summit.

The Prime Minister's Office said Trudeau had "brief, constructive interactions" with Chinese President Xi Jinping on the first day of meetings at the gathering of major economies.

Video footage from a working lunch on Friday showed the two leaders sitting beside each other but not interacting for several minutes while cameras were positioned on them. Trudeau could be seen making an effort to interact with Brazilian President Jair Bolsonaro, located on his other side.

Trudeau and Xi greeted each other prior to the interaction in the footage, government officials said.

At present, communication has proved to be difficult because the Chinese have indicated they have no interest in speaking with senior officials including Freeland or Trudeau.

To try and get through to China, Canada is now relying heavily on the influence of U.S. President Donald Trump to raise the issue in his own bilateral meeting with the Chinese president on Saturday. The president committed to doing so following a meeting last week with Trudeau in Washington.

Freeland wouldn't speak to whether there was a specific ask of Trump going into the meeting, adding it is never prudent or appropriate to detail private meetings with partners.

In addition to having the backing of the U.S., the prime minister has trying to establish heightened support as part of a strategy to encourage China to release them and to put an end to diplomatic tensions between the two countries.

The arrests of the detained Canadians is largely viewed as retaliation for the December arrest of Chinese high tech executive Meng Wanzhou.

Meng remains under house arrest in Vancouver, where she awaits extradition to the U.S. to face allegations of fraud in violating Iran sanctions.

It is important to see whether Trump does indeed raise the issue of the detentions, how he does that, and whether it has any impact, said Thomas Bernes, a fellow with the Centre for International Governance Innovation, a research think-tank.

Canada is doing everything it can to energize other heads of government to make a point to the Chinese that this is not an acceptable way to behave, Bernes said, adding it is helpful and important to remind China there is a body of opinion among world leaders.

"Having said that, unfortunately, I don't expect any early resolution or fast action," he said.

"We can make the points as we want, we can ask others to make their points, but unless somebody is prepared to put something on the table besides words, I think we're not going to see very much action."